WALLS & ROOFS in Africa talked to architect and urban designer, Luyanda Mpahlwa, director of Design Space Africa and commentator on design matters and the dialogue on African cities.
About ten years ago, Mpahlwa designed a low-cost housing solution featuring an Ecobeam timber frame and wire-mesh structure filled with sandbags, which is then plastered over and gives a finish looking like any other building. This formed part of Design Indaba’s 10×10 Low-Cost Housing Project, which called for innovative designs within the subsidy budget of R50 000. His design was also awarded with the American Curry Stone Design Prize in 2008.

Currently, his firm is involved in upgrading shacks to permanent houses in the Kosovo informal settlement in Philippi Township, Cape Town.

A deeper social challenge
“When you look at these kinds of landscapes, you realise the congestion that we don’t always see,” says Mpahlwa. “And the challenges that relate to urban decay, where children are growing up in conditions where they don’t even have decent spaces to play.

“As architects, we need to find a way to improve the living conditions for these people, within a limited budget. We need to not only design buildings, but we need to find ways to empower future generations by creating liveable environments,” he states.

“In fact, architects have a variety of roles to play. Firstly, we are trained in buildings and structures, so we can engage with communities and teach them how buildings work. About 30% to 45% of the people in the Kosovo township are unemployed. These people are already building and expanding their own shacks, so why not train them properly so that they can contribute to building their own real houses?” 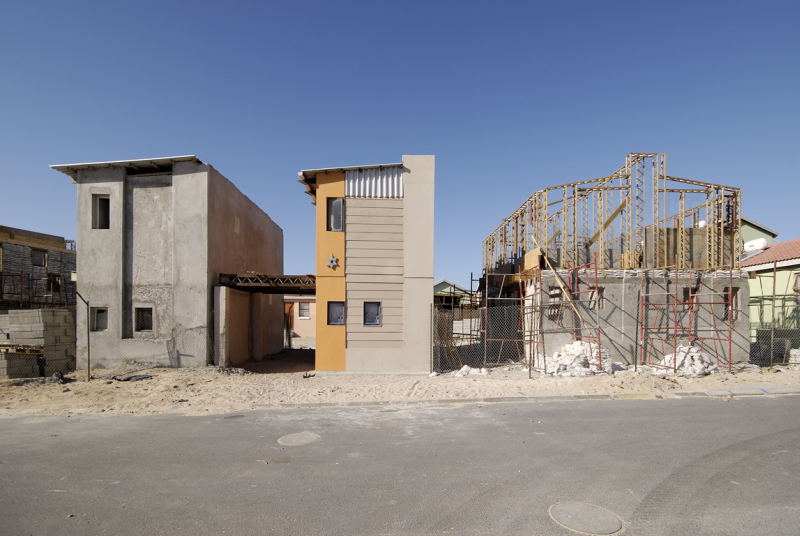 Luyanda Mpahlwa’s winning design for the Design Indaba’s 10×10 Low-Cost Housing Project 10 years ago, also won the American Curry Stone Design Prize in 2008. It is an example of the kind of innovative thinking that is necessary to address South Africa’s low-cost housing challenge. Courtesy of Design Space Africa

Architect as facilitator
Mpahlwa further points out that during the 10×10 project, initially the community was unhappy about being a guinea pig with experimental housing, until they understood the benefits and bought into the idea of a sandbag house. So architects also have a facilitating role to play – firstly between the public and the building, and then also between the building and institutions to get council approval.

Architect as designer
“And then we have to design the building and make sure that whatever comments we get from the community are translated into a building to their liking. We must use our design knowledge and expertise – not to impose a design on people, but to work with them to find a good fit. This is the essence of the social dimension of Architecture. We must remember that we are building for real people and that their needs vary,” Mpahlwa adds.

Finding appropriate materials
Another challenge when it comes to low-cost housing, is to find affordable building materials or systems that are easily available locally. “It is important to realise that as a designer, you don’t necessarily have to create everything or discover new things, but you should be able to identify the potential a certain material might have,” says Mpahlwa.

“What we did with the sandbag house, was to find a local material that is available naturally and which can, in a sense, be produced by unskilled labour. This made it possible for people who don’t have a lot of building knowledge to contribute to building their own houses.”

This idea wasn’t a new invention – in fact, through a bit of research Mpahlwa found that sandbags have previously been used to build villas for wealthy people who built holiday homes in the Cape Town area. He then found a supplier of the sandbag and Ecobeam building system that is based in Epping, Cape Town, called EcoBuild Techologies, and the idea for the 10×10 sandbag houses for low cost housing materialised.

The green guantlet
“The limitation with a system like this is that, if it is not recognised as a green building material and does not have the compliance certificates from Agrément and the South African Bureau of Standards (SABS), the government will not allow the system to be used, nor fund it,” says Mpahlwa. “And yes, there are valid are reasons for it, but what are we doing to make sure that we get more affordable materials like this on stream in our country?

“In my opinion, the South Africa building industry is not doing enough to support and invest in alternative and sustainable building systems, especially for the lower income group,” says Mpahlwa.

“We have quite a complex and well-established green design movement which governs sustainability, but unfortunately, a lot of the materials and systems that are green rated come at a premium because of the cost of certification and tests, and are not readily available locally. And when building for lower-income groups, it is very difficult to find anyone willing to fund alternative building systems.”

Walls need a rethink
Mpahlwa points out that over the last few years, the technology for roofing materials has advanced to improve thermal performance, but walls also need attention. “Concrete blocks are not sustainable because they attract both heat and moisture. We need to build walls that perform thermally, withstand varying weather conditions and adhere to structural requirements. It is something that we need to invest some time and money into,” Mpahlwa stresses.

One of his ideas is to develop a building system using corrugated iron, which is widely used in South Africa because it is effective in providing shelter against rain. But because it doesn’t perform well thermally, it needs to be combined with a form of insulation. And ultimately, it needs to be affordable. 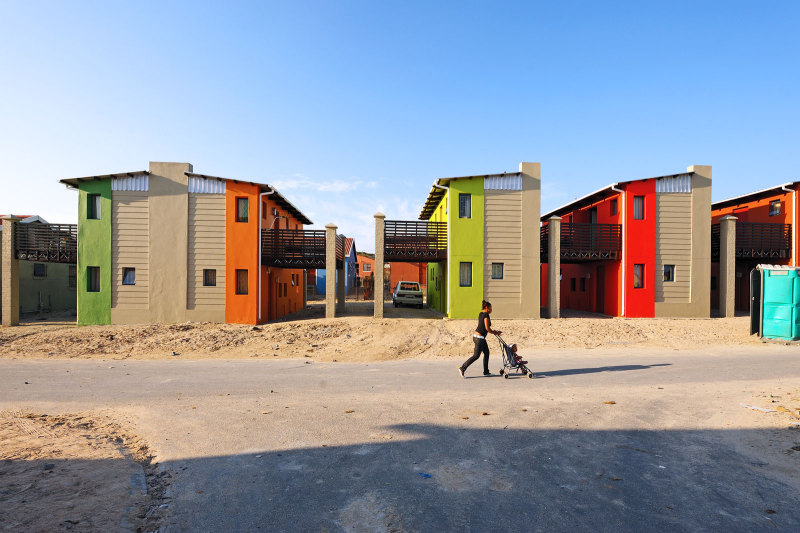 The next step
“We need to invest more in research and development, and support manufacturers to get alternative systems tested and certified,” Mpahlwa says. “We need more comprehensive technology and design input to make buildings cheaper, but at the same time safer and more sustainable. It is a science that requires a lot of research and only when we do that, we’ll find a broader range of local materials that can be used for low-cost housing, especially if we incorporate local skills of the communities we build for.

“The power of design should never be underestimated. The potential impact is significant.”

Full thanks and acknowledgement are given to Luyanda Mpahlwa and Design Space Africa for the information given to write this article.

Caption main image: The 10×10 sandbag house consists of an Ecobeam timber frame and wire-mesh structure filled with sandbags, which is then plastered over and gives a finish looking like any other building.
Courtesy of Design Space Africa

Designing the centrepiece in the cultural heart of the Arab world