Vertical forest designed to clean the air in city centre

Wonderwoods is conceptualised as a vertical forest that could house about 200 mixed-use apartments in what would become the new Healthy Urban Quarter of the Utrecht city centre in the Netherlands. As part of the project, a 90m high vertical forest is proposed to host around 10 000 plants of about 30 different species on its facade, including 360 trees, which would equal about a hectare of woodland.

If realised, Wonderwoods will be able to absorb some 5,4 tons of CO₂ and fine particles (PM) each year, and produce about 41 400 tons of oxygen in the same period. 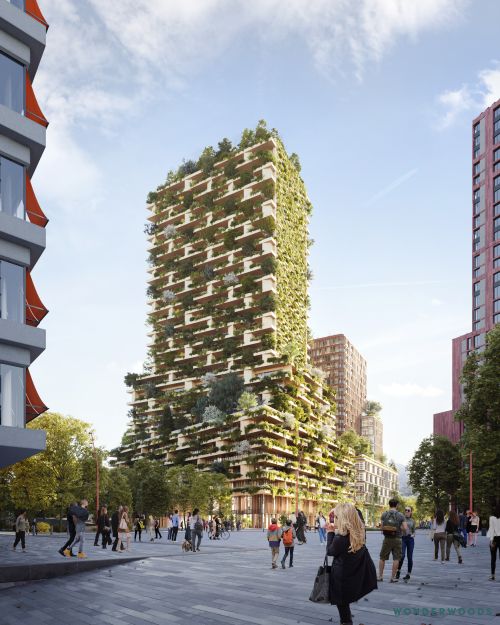 If realised, Wonderwoods will be able to absorb some 5,4 tons of CO₂ and fine particles (PM) each year, and produce about 41 400 tons of oxygen in the same period. Courtesy of Stefano Boeri Architetti

Living architecture
The green facade will change in colour and biomass over time, varying with the seasons and sunlight incidence. It is further proposed that maintenance of the Wonderwoods Vertical Forest will be linked to a centralised control system which, through sensors, will monitor and subsequently vary the level of plant irrigation and also schedule pruning and other interventions.

The apartments have been conceived to enhance the greenery hosted on the balconies and to maximise the solar illumination of the interiors. It has also been estimated that, thanks to the air-filtering action of the leaves, the microclimate created on the terraces will reduce the temperature difference between the interior and exterior, leading to a sharp reduction in air-conditioning energy costs. 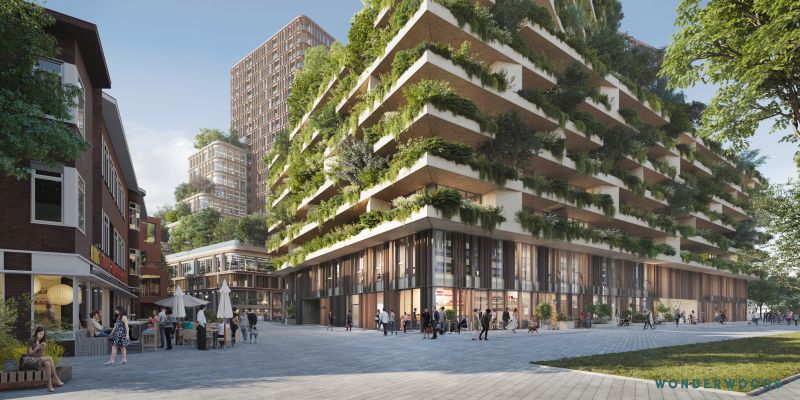 Wonderwoods Vertical Forest will become a stronghold for biodiversity, in particular indigenous birds, while carrying out an important demineralising experiment of vertical urban surfaces. Courtesy of Stefano Boeri Architetti

A mix of functional spaces
Besides the focus biodiversity, Wonderwoods is also a model of mixed activities and functions. In addition to the comprehensive system of duplex residences, the development would also include commercial spaces, healthy restaurants, a fitness area, educational facilities, bicycle parking and a public leisure space.

On the ground floor, directly connected to the roof garden on the sixth floor, the Tower will house the Vertical Forest Hub, a real documentation and research centre on urban forestation worldwide.

According to Stefano Boeri Architetti, the Wonderwoods Vertical Forest is not just another skyscraper, iconic and indifferent to the context in which it is built, and neither is it just a tall building bringing up to the sky the traditional features of an urban block. It rises from the ground, respecting and enhancing the size of the block where it stands, and at the same time, it aims to deliver to the sky the utopia of an unprecedented cohabitation of city and nature.

Full thanks and acknowledgement are given to Stefano Boeri Architetti for the information and images provided.

How to win R40 000 with innovative boundary walls