Approximately 500 000 Firelight Satin bricks shape the dramatic, five-storey tower of the award-winning Umkhumbane Cultural Museum at Cato Manor, Durban. In addition, Silver Grey Travertine bricks were used on ancillary spaces constructed using a simple stretcher bond with minimal embellishment.
This established a strong, homogenous, sculptural form suited to a museum building that according to architects Rod Choromanski and Dean Ramlal of Choromanski Architects, is a manifestation of local, regional and national pride. Various materials were investigated before confirming clay brick as the final cladding.

An artist’s hand
Choromanski points out that specifying brickwork ensured local artisans’ hands on the building, creating the curvilinear form in contrast to the machined process of the aluminium atrium screen. The form was not without challenges for the bricklayers, who initially struggled to achieve quality and production targets on the curved and cambered walling. In response, the eThekwini Municipality Architecture Department involved on-site accredited training of the bricklayers which supported their teams while skills were honed to meet targets.

Michael Nzama, a bricklayer from Cato Crest, worked on the building for seven months at various heights of scaffolding. “I joined the on-site training team, which was conducted by the City and the main contractor, and became part of the bricklayers responsible for the face-brick cladding, which required a high quality. The project taught me many skills due to it being very complex and working at higher levels than what I was used to. The experience gained on the project has given me confidence and work opportunities on other projects.”

Openings in the walling deliver dappled light and ventilation into the circulation cores, and some serve as bird-nesting boxes.

Ian Rout of Ian Rout & Associates Project Managers comments: “The building is the culmination of a lengthy design process, driven by a creative architect and supported by an excellent professional team, working with a limited budget. The construction process was extremely challenging, but a unique building meeting the functional needs of the client and celebrating the use of brickwork has been achieved.” 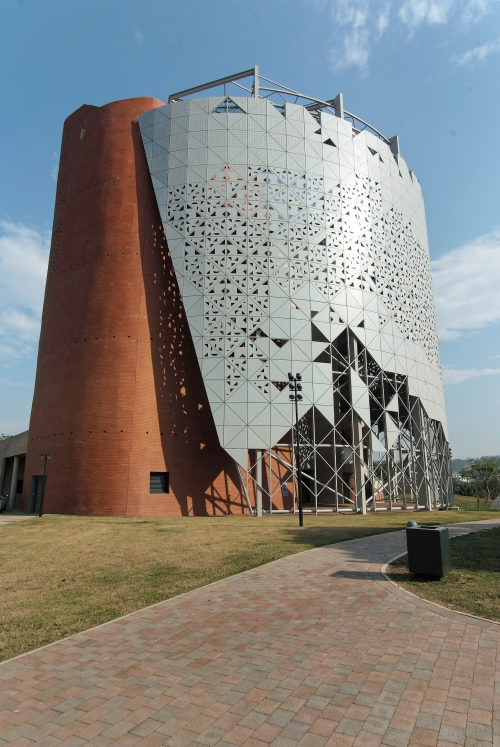 Transforming a community
The Umkhumbane Cultural Museum is not only the first new museum to be built in Durban in 100 years, but also the first public cultural building constructed in the area. The museum is located at a visible crossroads site which has been transformed from a once polluted riverbank and dumpsite into a world-class facility that represents the aspirations of a modern African city and its people.

The five-storey museum tower will document the socio-political history of Cato Manor, cultural traditions and history of the Zulu nation, as well as offering venues for educational and recreational events.

Choromanski Architects won the eThekwini Municipality Architecture Department’s public design competition in 2003, after the city’s Local History Museum team identified Cato Manor as the ideal location for a new museum. The museum is expected to not only preserve the area’s rich cultural and political history, but to also stimulate innovation and local economic activity in greater Cato Manor.

“There are many voices from Cato Manor dating back to early Iron Age settlements to which this project provides a platform for expression,” says Choromanski. Although South African history remembers Sophia Town and District Six, scant attention is given to Cato Manor, where forced removals under apartheid first took place and where the earliest resistance to these began. Today, Cato Manor is home to 100 000 people who have resettled in the area post-1994.

The Umkhumbane project site was honoured by the reinternment of Queen Thomozile Jezangani kaNdwandwe, mother of King Goodwill Zwelithini, in 2011. The queen resided in Cato Manor after leaving the royal household, and was a talented crafter and vocalist. The museum rises alongside her crypt, where she is memorialised.

The tower reduces the museum’s footprint, freeing up the site for a park and future built phases. The city’s master plan for the site envisages the inclusion of a cultural park and public neighbourhood square, further retail spaces for traders and crafters stalls, and facilities for children.

A cleaning machine for tight spaces

4 reasons to invest in proper maintenance for your vinyl floors