The house with the many angles

A client that lives in Europe and travels the world on her business endeavours, decided on the beautiful naturesque town of Knysna as the place to build her holiday house, where she could also display her collection of photographic art.

The house was not to be anything standard and the brief called for something spacious and sculptural, which is where the unusual shapes and angles originated from. In fact, “on the northern side of the house there is hardly any 90° angles – the Rheinzink part of the façade has got three different angles in one wall, together with an angled roof, so that makes the building very sculptural,” says Jeanette Schachler, the architect responsible for overseeing the building process and realising the design.

These unusual angles and shapes was the reason why Rheinzink was selected for parts of the façade. “Rheinzink is great as a combined finish since it is suited as both a wall and roof material, which can provide a seamless covering,” says Schachler. “Many other roof sheeting types are limited to certain angles, while Rheinzink is quite flexible in covering various shapes and forms, as well as creating interesting patterns. 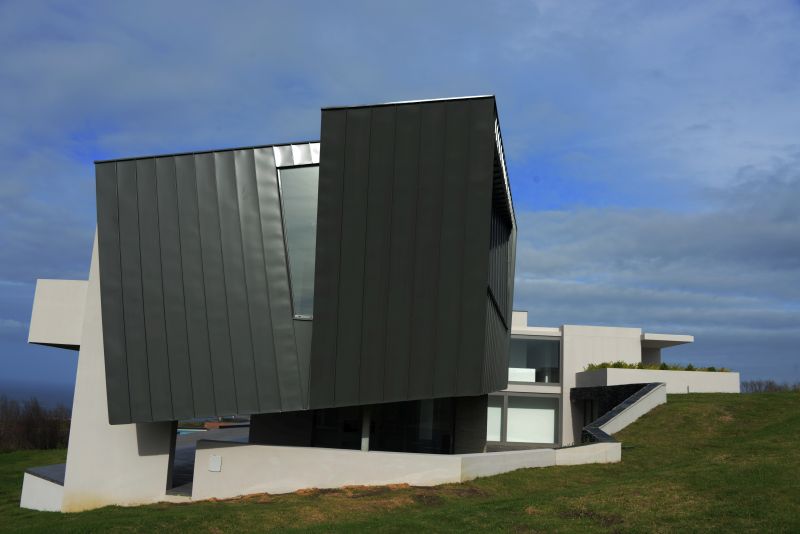 The Rheinzink cladded facade on the northern side of the house hardly has any 90° angles, and that, together with the angled roof, makes the building very sculptural.

“The Rheinzink material was taken into the reveals of the windows and also to the interior to clad the reveal of one roof flight. Instead of using plasterboard, we took the Rheinzink down into the ceiling, so even from the inside one gets a feel of the material,” she adds.

Expert workmanship
In order to shape and install Rheinzink cladding professionally though, special workmanship is needed. Rheinzink SA has got a network of improved installers, many of them from Germany where the material is commonly used.

According to Schachler, on this project it worked out brilliantly since Spenglerei Andreas Muehle Roofing, a Rheinzink recommended contractor is based in Port Elizabeth, not too far from the site. “They really know what they are doing and they were just brilliant on this project,” she commends. 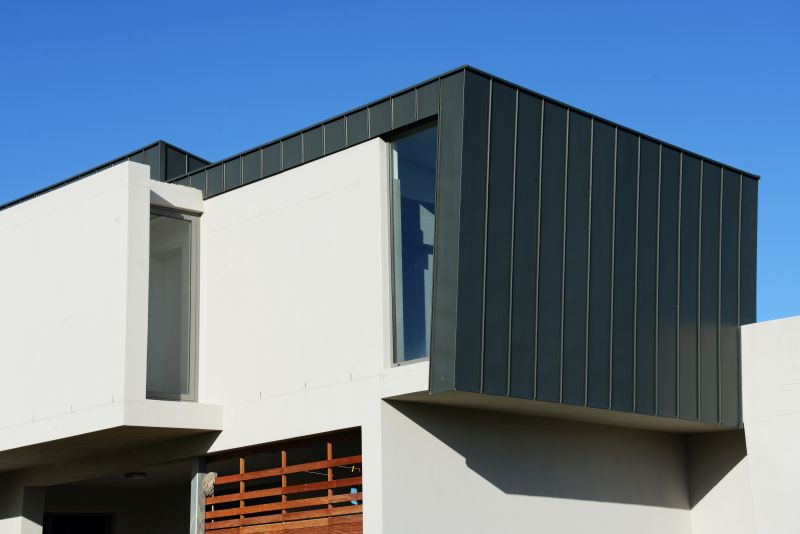 Rheinzink is great as a combined finish since it is suited as both a wall and roof material.

To complement the national availability of the Rheinzink roofing, facade cladding and water drainage systems, the company’s South African office offers a comprehensive support service, including technical assistance on application technique and specifications for planners and installers.

Mineral, breathable paint
For the rest of the plastered walls, a special mineral paint, imported from Germany, was used to seal the walls from the outside while at the same time allowing them to breath.

“In Knysna and other coastal areas, moisture easily gets trapped inside the houses and if you are not there and able to ventilate the house regularly, that is when one gets problems with moisture and mould,” Schachler explains.

Art boxes
When looking at the house from a distance, three Corten steel boxes visibly pops out of the façade. On the interior, these form the gallery space which was designed specifically for the art collection. The boxes were manufactured in Cape Town, transported intact and installed using a crane.

“The beauty of the Corten steel is that it is meant to rust and the rust actually protects the steel, so the more it rusts, the better. It doesn’t have lifelong lifespan and the client is aware that she might have to replace it after about 15 to 20 years,” says Schachler.

The garage, also comprising Corten steel, was done by a local steel specialist.

Three Corten steel boxes pops out of the façade. On the interior, these boxes house an art collection.

Long-distance architecture
Another challenge was the fact that Schachler was actually based in Cape Town, flying in every second week to do checks on site, the engineer that was situated in George and the client who was constantly travelling.

“We had to resolve a lot of things via conference call,” says Schachler. “But it actually worked out well. I use software to create a 3D model that can be shared via an app. The client can then access the model and ‘walk’ through the house to view detail. That makes it easy to communicate and explain things that need to be resolved. Nowadays, thanks to technology, you don’t really have to be sitting around the same table for every discussion.”

Surviving the Knysna fires
While construction was ongoing, the massively destructive Knysna fires of 2017 broke out. Miraculously, the fire stopped at this site, thanks the vegetation that was cleared for the building works. Aerial photographs showed total destruction around the site, but this house survived.

Green roofing the way to go in the...