To stabilise eroded embankments in the Pepper Bay harbour area on the West Coast, the Terraforce retaining wall system was specified by Ulwazi Consulting Engineers as a practical, stable and weather-resistant surface protection. Stretching over an area of 2,5km and rising 21m high, the softer material has eroded, leaving harder layers of overhanging and unstable rock.
According to Adriano Guerrini of Guerrini Marine Construction, the embankments were swept clean of vegetation and loose material, and then benched for slip prevention in order to determine the extent of stabilising and set out the angle of the final face slope, which is generally between 60° and 70° to the horizontal.

“Using soil-crete, a sand-cement mix, the rock face was covered by backfilling in well-compacted layers, with the depth of the backfilling being monitored and minimised to follow the natural contours of the exposed face,” he explains. “At the same time, the block facings were built up and the blocks were filled with soil-crete, stepping back towards the rock face where appropriate, to minimise the depth of backfill and reduce the visual impact of a sheer wall. Finally, the tops of the step-backs and the finished level were capped with a concrete slab.” 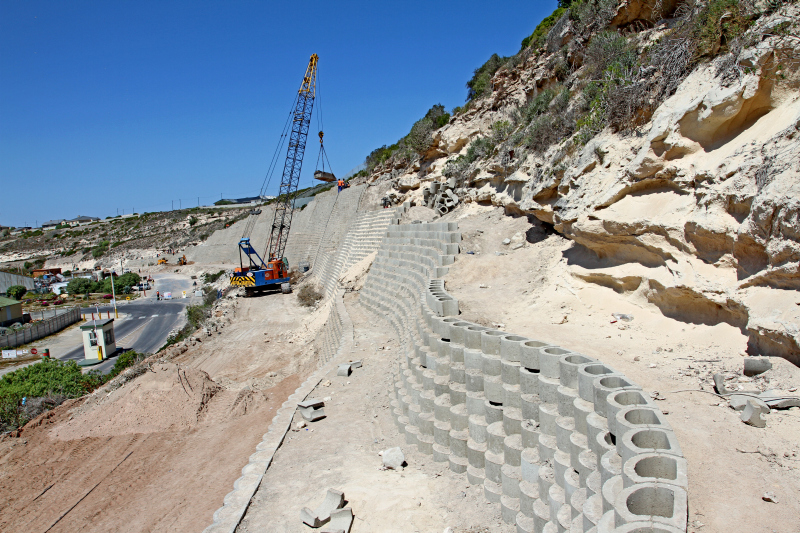 Approximately 180 000 blocks, with 100m² backfill sand per 1 200 blocks (100m²), were supplied by Van Dyk Stene, a Terraforce manufacturer on the West Coast. These were installed using five TLB loaders, a 20 000 litre water truck and 80 labourers, of which 90% is local untrained workers who underwent onsite training. Also, under the auspices of the Expanded Public Works Programme, 25 official learners were given basic construction skills training over three months.

Completed in March 2018, indigenous plants will be planted to re-establish the natural sensitive vegetation.

Caption main image: Initiated by the Department of Public Works as custodian of state land, this large retaining wall in the Pepper Bay harbour area was built to stabilise eroded embankments.

Is your sales team making you look bad?

Being change-fluid is a cultural matter and a strategic imperative