The development of elastic floorings over 3 centuries

What were the driving forces behind the invention and development of elastic floorings over the past few decades? Economic necessity, mere chance and the creative spirit of discovery, says the Multilayer Modular Flooring Association (MMFA).

Diverse products continue to be created and product manufacturers keep on experimenting with new material recipes and textures. Over the past decade or two, MMF floorings have experienced a real boom and modern luxury vinyl tiles (LVTs) are always changing. An interesting journey in time through the centuries is highlighted as the MMFA searches for the origins of elastic flooring developments.

The first elastic flooring was known as the “Floorcloth” invention, which was patented by Englishman Nathan Smith in 1763. The ingredients of the first elastic floor included tar pitch, resin, beeswax, linseed oil and “Spanish brown” pigment as a chalk-like filler. The raw compound was pressed onto a fabric substrate by passing it through an iron roller heated by fire and turned by hand. The mono-coloured sheets could then be block printed manually for decoration.

Around 80 years after Smith’s pioneering work, Englishman Elijah Halloway acquired a patent for “Kamptulicon” (Greek: kampto: to bend, to flex) an elastic flooring made from natural rubber, gutta-percha (rubber tree sap), cork remains, shellac and linseed oil. The constituents were mixed and rolled onto a thick fabric under high pressure. Five decades later, this flooring was displaced in the market as it tended to crack because of shrinkage of the wood of the subfloor construction. 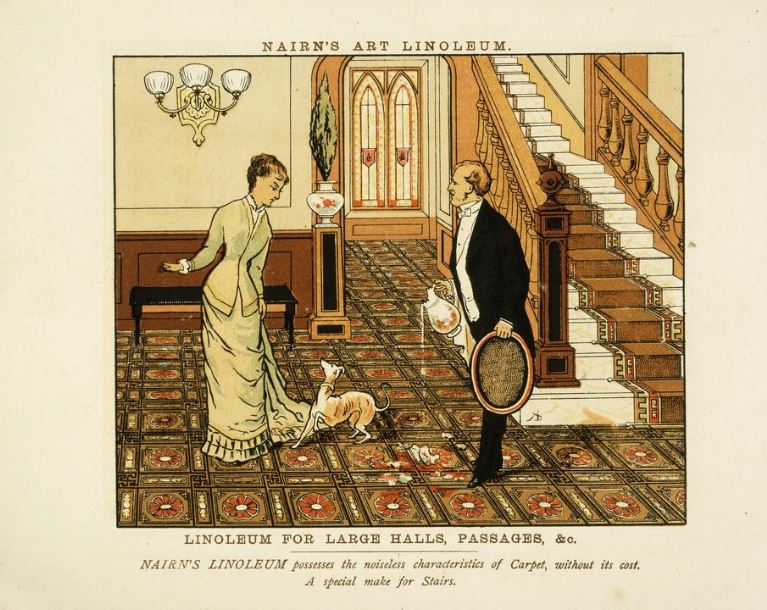 In 1861, Frederick Walton produced a rubber substitute from linseed oil, cork dust and resins, which he offered to industry under the name “Indian rubber substitute” – initially with little success. Shortly thereafter, it was brought to his attention that this tough, elastic product was suitable for manufacturing flooring and this led to “linoleum”. Industrial production of this linoleum flooring started in 1864, other manufacturers soon followed suit and new methods of making linoleum flooring more visually attractive through inlay work and mosaics were developed. Zinc templates were used to produce multi-coloured patterns through the entire thickness of the flooring.

In 1920, the first marbled linoleum appeared on the market, which over the decades was to become one of the most popular linoleum patterns. By 1930, there were almost 50 linoleum factories worldwide, most of which were in England, France, Germany and the USA.

In 1926, the potential of PVC as an enormously versatile material was recognised in the United States. Waldo L Semon, a chemist at BF Goodrich in the USA, attempted to obtain an unsaturated polymer that could bond rubber onto metal by the dehydrohalogenation (removal of halogen hydride) of polyvinyl chloride in a high-boiling solvent. He began to experiment with the material, combined it with other chemicals and exposed it to heat. The result was “plastic PVC”, a flexible gel with similarities to natural rubber. He was granted patents for his invention in the United States.

Linoleumwerke, Bietigheim and DAG (Dynamit-Actien-Gesellschaft, Troisdorf), replaced the linoleum used until then in the Reichsbahn national railway trains with a vinyl flooring.

The development of a Mipolam flooring as a substitute for rubber floorings in 1936 was based on pure PVC with a plasticiser and mineral powder as a filler. Compared to rubber, the new flooring displayed significantly less wear and tear, more attractive colours could be achieved than with rubber-based floorings, and the flooring scored points for its inflammability and oil resistance. 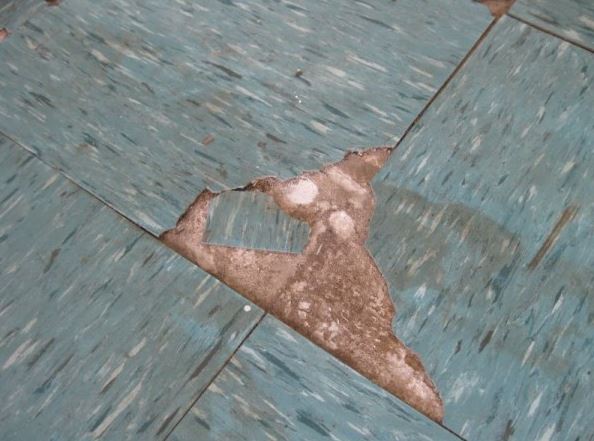 Asbestos was the substance that ultimately dragged PVC floorings into the dirt of the flooring industry in the 1980s. The fact that vinyl flooring managed to re-establish itself in the international market with new product developments was thanks to a new generation of vinyl tiles named LVT (luxury vinyl tiles), in which asbestos was not used.

German flooring manufacturer Windmöller Flooring developed the first modular PU flooring with the click joint in the mid-2000s and was the first company to offer LVT planks in 2009. These planks were only five millimetres thick and were no longer bonded over their full area, but instead could now be laid floating, thanks to the click joint. This product development rang in the breakthrough on international markets and for the first time opened up the channel to end users.

From around 2010, the LVT boom accelerated and by 2016, the market volume of the LVT industry was estimated to be 200 million square metres. The triumphal march of LVT into the homes of end users has been sustained.

Innovation and alternative ways of building!

The engineering genius behind the Ashton Arch Bridge

Getting to grips with LVTs, SPC Planks and...