The Desert Rose: Capturing history in a modern way

The National Museum of Qatar (NMoQ) is dedicated to the country’s history – from the pearl trade in Roman times to the economic acceleration that made the kingdom one of the richest globally and a world leader in education, communications and energy technology.

On the site, the Royal Palace of Sheikh Abdullah bin Jassim Al Thani rises, a 20th-century landmark of major heritage value to Qatar. A system of interlocking disks surrounds this historic palace like a necklace that looks as if it has grown organically.

“Symbolically, the architecture evokes the desert, its silent and eternal dimension, but also the spirit of modernity and daring that have come along and shaken up what seemed unshakeable. So, it’s the contradictions in that history that I’ve sought to evoke here,” architect Jean Nouvel states. 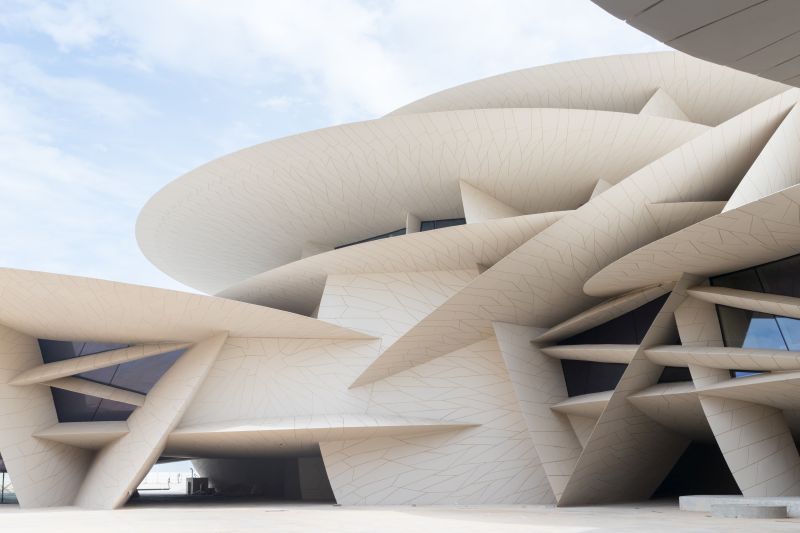 The design was inspired by the “Desert Rose” – a mineral rock formation commonly found in the deserts of the Gulf region. Photo by Iwan Baan

Biophilic inspiration
The museum building is inspired by the “Desert Rose” – a mineral rock formation commonly found in the deserts of the Gulf region when minerals crystallise in the soil just below the surface of a shallow salt basin.

“Taking the Desert Rose as a starting point turned out to be a very progressive, not to say Utopian, idea,” says Nouvel. “I say ‘Utopian’ because, to construct a building 350m long, with its big inward-curving disks, and its intersections and cantilevered elements – all the things that conjure up a desert rose – we had to meet enormous technical challenges. This building is at the cutting edge of technology, like Qatar itself.” 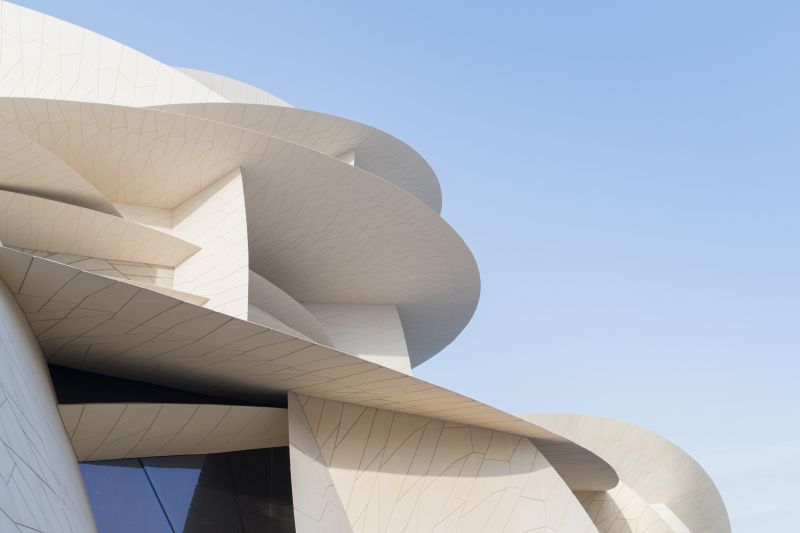 The large interlocking disks that form the museum are spherical in section and of different diameters and varying curvatures. Photo by Iwan Baan

The large interlocking disks that form the museum are spherical in section and of different diameters and varying curvatures. The vertical disks support the building and transfer the loads of the horizontal planes to the base. Inside, the interlocking disks form geometric spaces that create an exciting architecture of contrasts and surprises. One room might have a high, slanting volume while the next has a much lower intersection. This creates a dynamic tension throughout the complex. 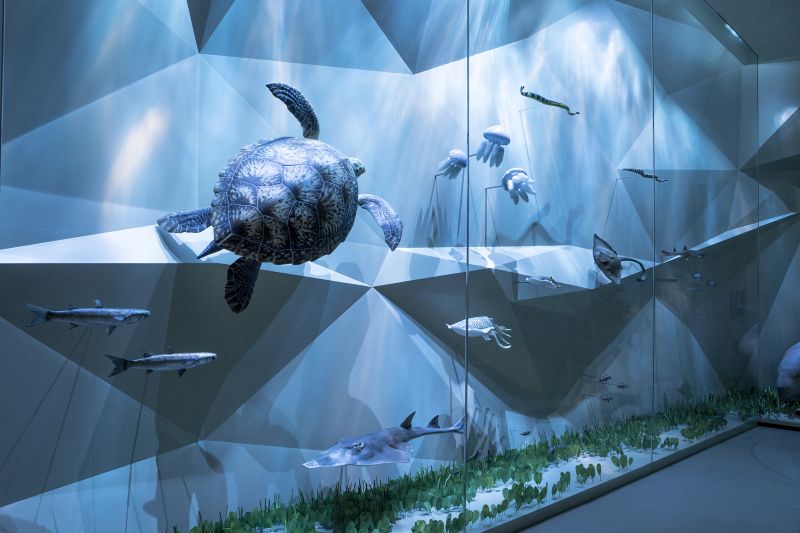 The vertical walls are coated in stuc-pierre, or stone stucco, a traditional gypsum and lime-blended plaster that provides a stone look. Photo by Danica Kus

“I owe my love of things that aren’t quite vertical to one of my teachers and mentors, Claude Parent, with whom I worked a great deal. Several floors are on an incline. You walk under them, you walk up, and you become aware that there are hardly any vertical lines anywhere. Looking more closely, you can find a few elements that appear to be vertical but in reality are not. You only get the impression they are because that’s the natural scheme of things,” adds Nouvel. 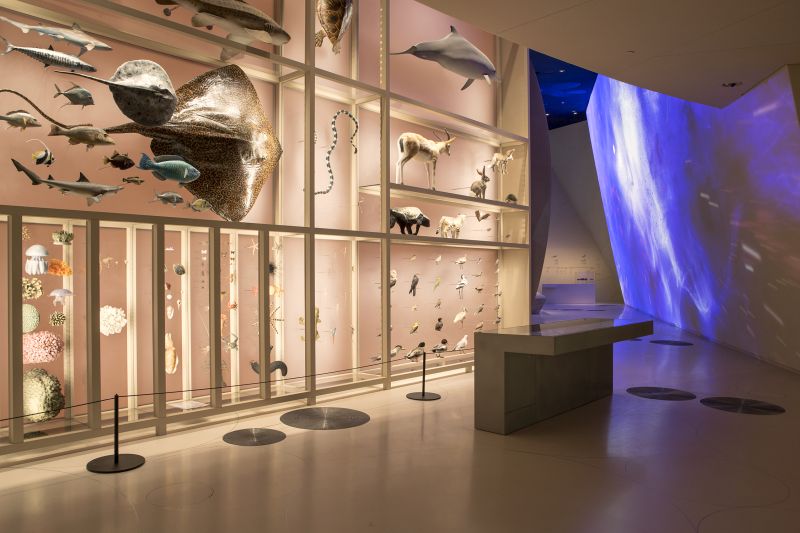 Finishing touches
The sandy beige building is clad in ultra-high-performance glass fibre-reinforced concrete (UHPC) panels approximately 2m² each, fixed to a steel frame that spans an insulated waterproof superstructure. The voids between disks are filled with glass panels, of which the frames are recessed into the ceilings, floors and walls, making the panels look frameless. Mullions divide the larger glass walls into units that can easily be manufactured and transported. 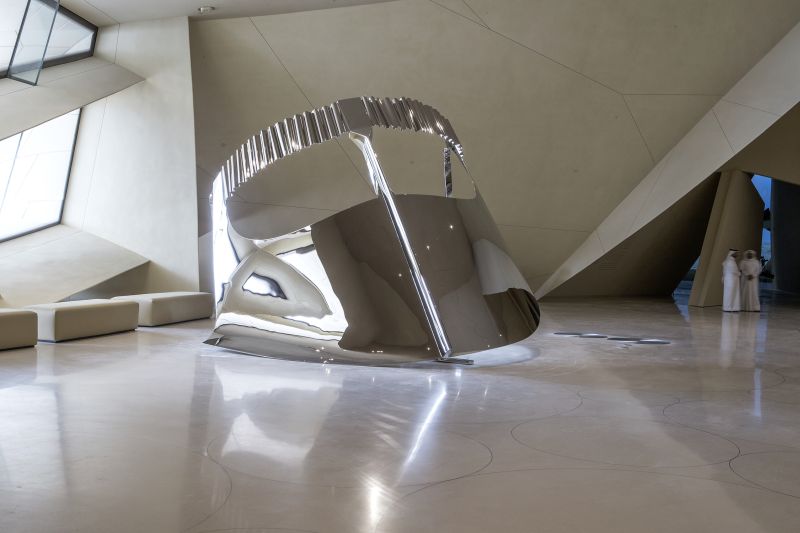 For the interior, the finishes are also neutral and monochromatic. The floors are sand-coloured polished concrete with tiny mineral aggregates. The vertical walls are coated in stuc-pierre, or stone stucco, a traditional gypsum and lime-blended plaster that provides a stone look. Ceilings are covered in a microporous acoustic plaster sprayed on mineral wool.

The main building materials used, namely steel and concrete, were locally sourced and/or made. 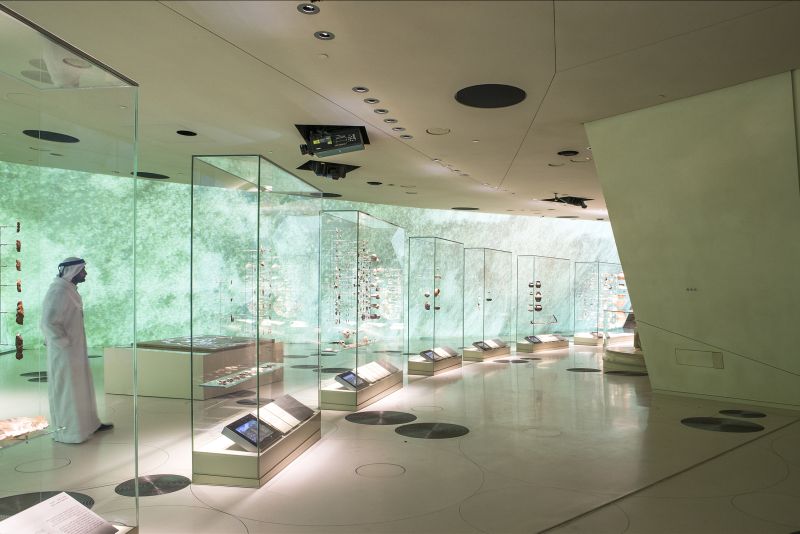 Ceilings are covered in a microporous acoustic plaster sprayed on mineral wool. Photo by Danica Kus

Dealing with the desert sun
The interior circuit forms a loop that ends in a discovery of the restored Royal Palace. Certain points provide visitors with access to a central courtyard, sheltered by the tilted disks, where outdoor events and performances can take place. From there, one can also view the outdoor spaces of the old palace and stroll along a promenade at the water’s edge. Thanks to the shadows created by the overhanging elements, these spaces are also shaded. 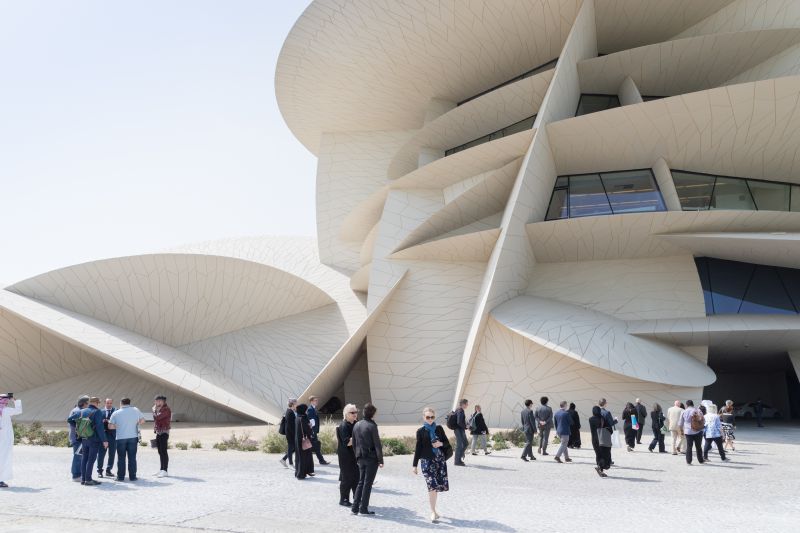 The voids between the disks are filled with glass panels, of which the frames are recessed into the ceilings, floors and walls, making the panels look frameless. Photo by Iwan Baan

The building has been designed to be as energy efficient as possible. Buffer zones in the spaces between the disks create thermal mass and form a cushioned barrier against the sun, reducing the cooling loads. When the sun hits the building from the east or west, the disks cast long, protective shadows. The building also doesn’t have many openings and the few windows are set back so that they are always out of reach of the sun. The interior spaces can therefore be air-conditioned more economically.

In addition, the landscaped park features only drought-resistant native vegetation. These and other sustainability measures have qualified the NMoQ for a USGBC LEED gold rating and GSAS four stars.

Full thanks and acknowledgement are given to Jean Nouvel for the information and images provided.

Transform any floor into an enduring masterpiece

DOMOTEX theme is all about acoustics