Spiritual dome veiled in a unique type of glass

Set within the foothills of the Andes, bordering the metropolis of Santiago, Chile, the Bahá’í Temple of South America is a beacon of light that invites everyone inside, drawing humanity closer together.

Translucent marble panels form the interior wall of the temple. Each wing of the nine-sided temple contains over 870 unique pieces of marble. Courtesy of Hariri Pontarini ArchitectsWith their design, Canadian firm, Hariri Pontarini Architects, aimed to achieve “an interplay of contradictions: Stillness and movement, simplicity and complexity, intimacy and monumentality; a solid structure capable of dissolving in light”. All the materials used – stone, glass, wood and steel – became spiritual elements that helped achieve this vision.Cast-glass cladding
A new type of material, cast-glass cladding, was developed to realise the light-inspired design intent of the outer layer of the temple’s nine monumental wings. The material took four years of experimentation and collaboration with a Canadian glass artisan to be developed. 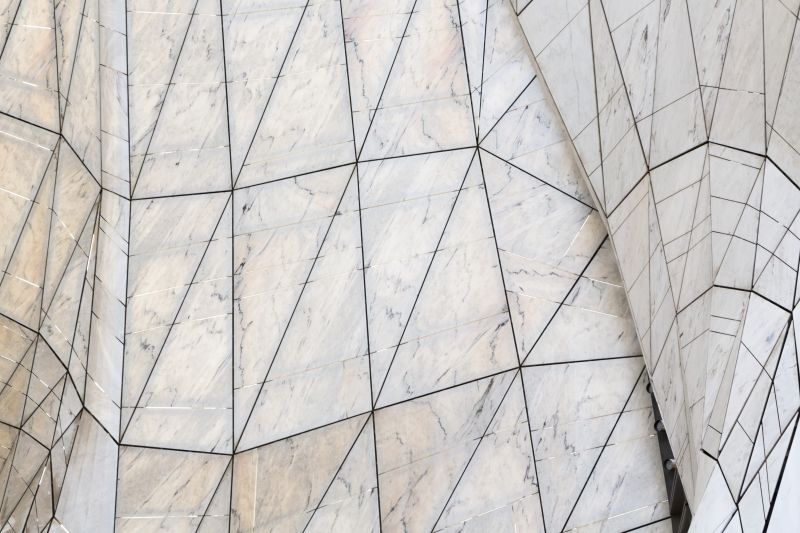 Translucent marble panels form the interior wall of the temple. Each wing of the nine-sided temple contains over 870 unique pieces of marble. Courtesy of Hariri Pontarini Architects

In turn, translucent Portuguese marble was used for the interior layer. Each of the nine wings contains over 870 unique pieces of translucent marble panels. Flat pieces were water-jet cut from slabs to the exact shape defined by the computer model.

These gracefully torqued glass veils frame the open, interior worship space and are bound to an oculus at the top. Looking up at the apex of the dome, visitors experience a mesmerising transfer of light from the exterior of the cast glass to the interior layer of translucent marble. At sunset, the light captured within the dome shifts from white to silver, ochre and purple.

A steel superstructure
The superstructures of the wings are comprised of hundreds of unique, individually engineered slim-profile steel members and nodal connections. Each of the wings rests on concrete rings and columns on elastomeric seismic isolators, so that in the event of an earthquake, the concrete pads slide horizontally to absorb the shock. 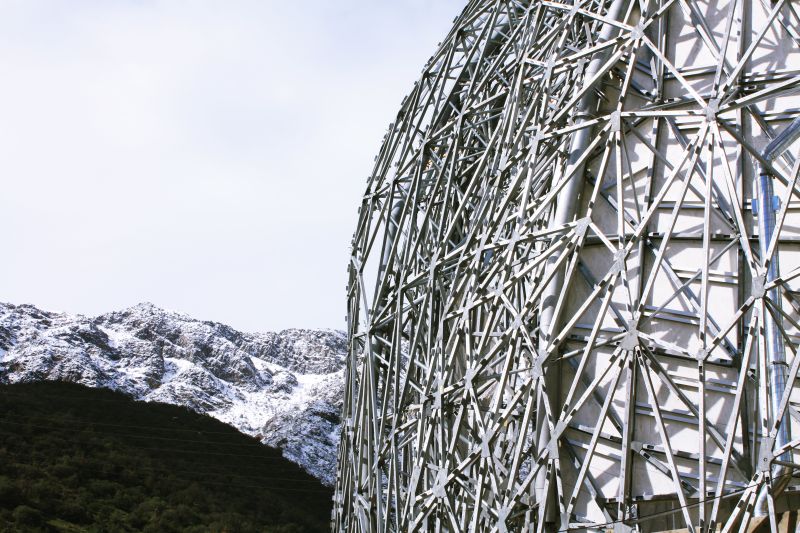 The final fabrication of the steel superstructure was made possible only through advanced fabrication techniques. The multitude of parts were assembled in Germany into manageable sections, and then shipped and assembled on site in Chile. Courtesy of the Office of External Affaires – Templo Bahá’í

According to the architects, the final fabrication of the steel structure was made possible only through advanced fabrication techniques. The multitude of parts were assembled in Germany into manageable sections, and then shipped and assembled on site in Chile.

A place for all to come together
The Bahá’í Temple represents the last of eight continental temples commissioned by the Bahá’í community. Expressing a faith of inclusion, the temple’s interior spaces were designed to invite people to come together and sit in quiet contemplation. 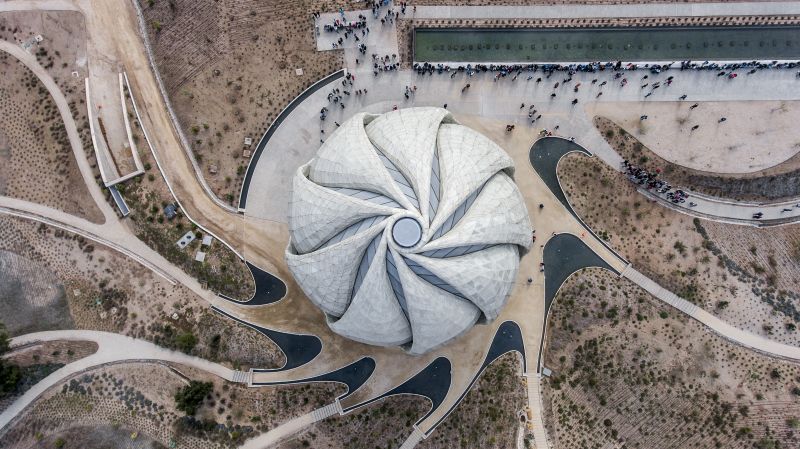 Viewed from above, the dynamic arrangement of the nine wings is clear. Courtesy of Andrés Silva

“At the heart of this building there is a belief and an aspiration: That even now, in the fractured 21st century, we can respond to a human yearning to come together, to connect to one another and to something that moves the spirit,” the architects commented. 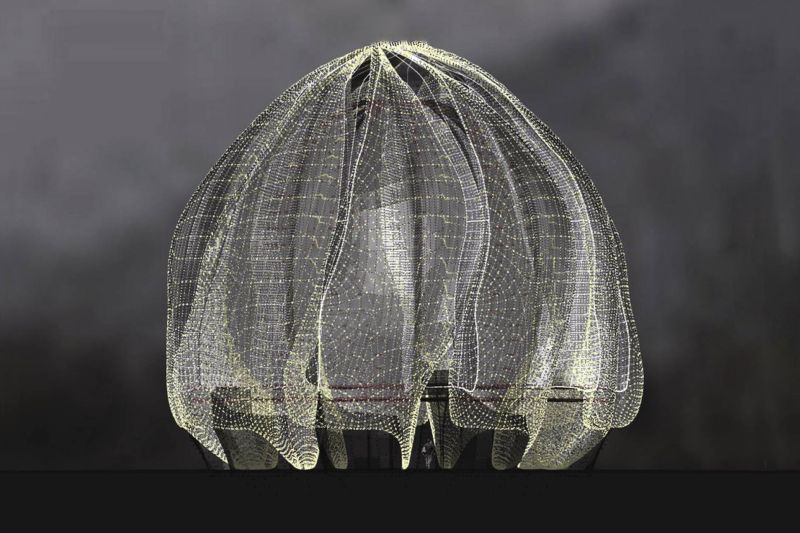 “The arced lines of the supple wooden benches invite people to come together, not as part of a congregation, but to congregate; to sit next to one another in quiet contemplation, sharing in the communal act of being,” they stated. 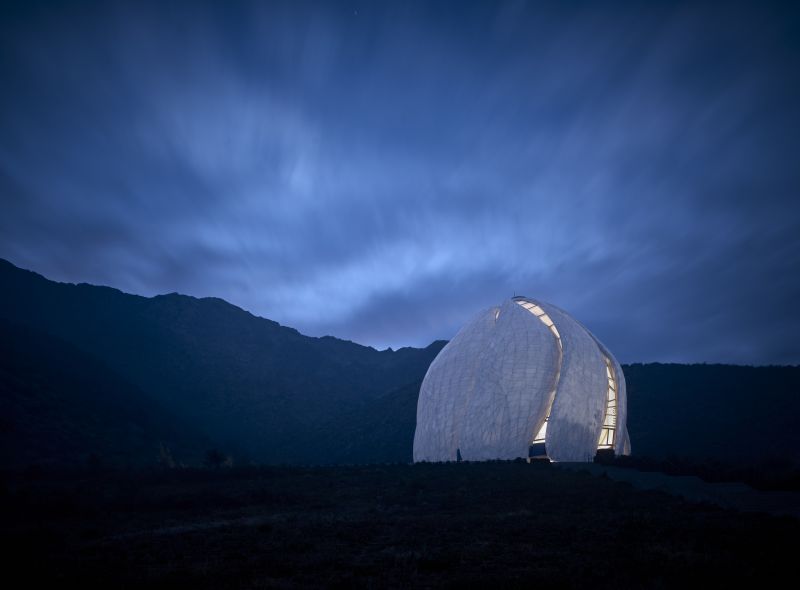 “At night, it stands like a lantern, softly lit from within.” Courtesy of doublespace photography

Hand-finished interior materials such as walnut and leather were selected to bring a warm textural quality. Patinaed bronze for elements such as doors, exterior soffits and railings was chosen as a durable complement to the interior cladding materials.

Since the opening in October 2016, the temple has attracted over 1,4 million visitors, welcoming up to 36 000 people each weekend.

Professional recognition
Hariri Pontarini Architects has won a dozen awards for this project, the latest having been awarded by the Royal Architectural Institute of Canada (RAIC) – the 2019 RAIC International $100 000 (CAD) Prize for Excellence in Architecture. 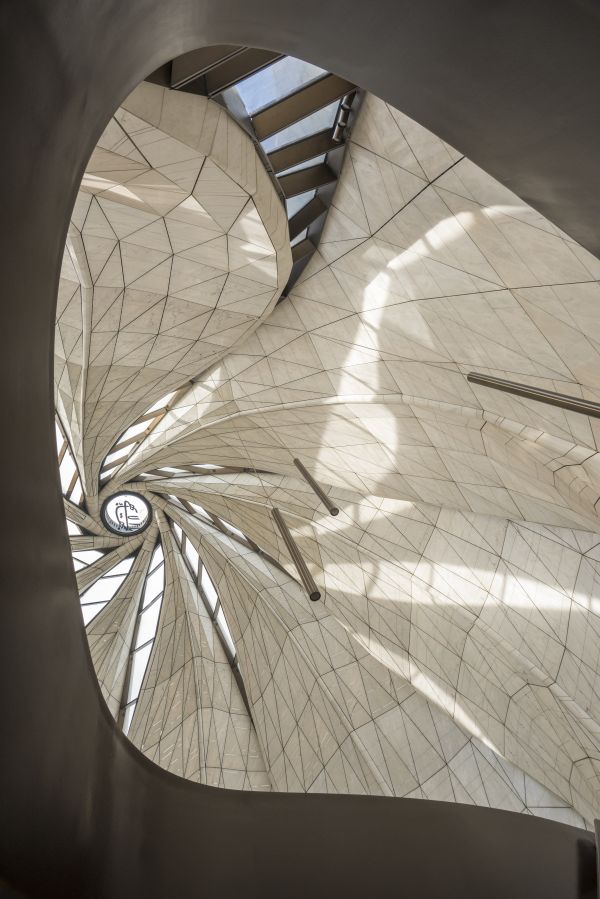 The gracefully torqued glass veils are bound to an oculus at the apex of the dome. Courtesy of Guy Wenborne

The jury commented: “The result is timeless and inspiring, a building that uses a language of space and light, form and materials, to express an interpretation of Bahá’í philosophy and teaching that becomes universally accessible as a shared spiritual and emotional experience.

“The architects resolve a challenging and prescriptive programme for a new Bahá’í Temple near Santiago with a powerful form that creates a new landmark – a jewel – in a dramatic natural setting,” said the jury.

Full thanks and acknowledgement are given to the Royal Architectural Institute of Canada and Hariri Pontarini Architects for the information given to write this article. 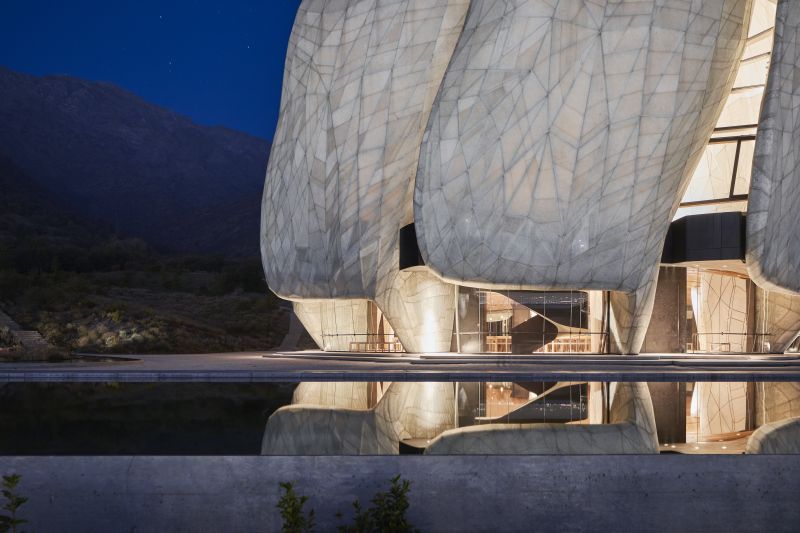 The Bahá’í Temple of South America is designed to be a place of welcome and meaning for everyone. Courtesy of doublespace photography

Is it concrete, is it a tile? NO IT’s VINYL!