Serpentine Pavilion 2018 designer the youngest yet

Harnessing a subtle interplay of light, water and geometry, Frida Escobedo’s atmospheric courtyard-based design for the Serpentine Pavilion 2018 draws on both the domestic architecture of Mexico and British materials and history, specifically the Prime Meridian line at London’s Royal Observatory in Greenwich.
This bright Mexican architect is the 18th and youngest architect yet to accept the invitation to design the temporary Pavilion on the Serpentine Gallery lawn in Kensington Gardens, and only the second solo woman since Zaha Hadid designed the first Pavilion in 2000.

The brief for the annual Serpentine Pavilion is to design a temporary pavilion that is used as a community hub and café by day, and a forum for learning, debate and entertainment at night.

The selection of an architect, someone who has consistently extended the boundaries of architectural practice but is yet to build in England, is led by the curatorial approach that guides all Serpentine programming: Introducing the urgency of art and architecture to the widest possible audiences.

The courtyard – inspired by Mexican architecture
Escobedo’s Pavilion design takes the form of an enclosed courtyard, comprised of two rectangular volumes positioned at an angle. While the outer walls will be aligned with the Serpentine Gallery’s eastern facade, the axis of the internal courtyard will align directly to the north.

Internal courtyards are a common feature of Mexican domestic architecture, while the Pavilion’s pivoted axis refers to the Prime Meridian, which was established in 1851 at Greenwich and became the global standard marker of time and geographical distance.

British-made materials will be used in the Pavilion’s construction, chosen for their dark colours and textured surfaces. 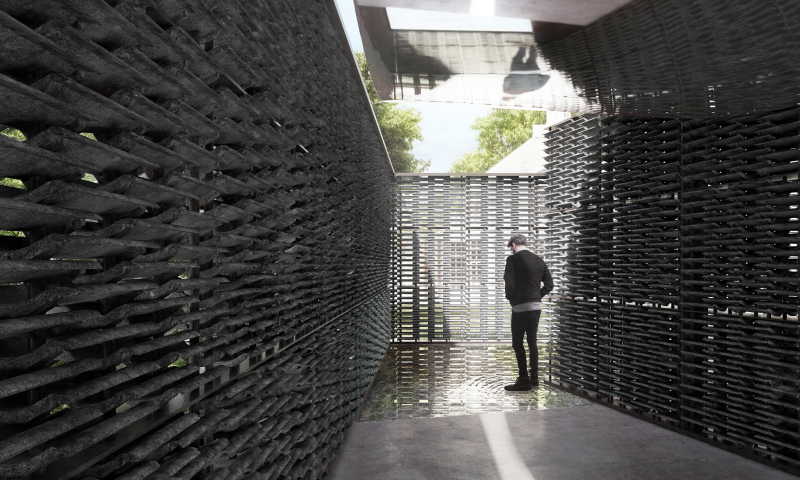 Perforated screens
The celosia walls of the structure will be made out of a lattice of cement roof tiles that diffuse the view out into the park, transforming it into a vibrant blur of greens and blues. A celosia is a traditional breeze wall common to Mexican architecture.

The curved underside of the canopy will be clad with mirrored panels, and a triangular pool cast into the Pavilion floor will trace its boundary directly beneath the edge of the roof, along the north axis of the Meridian. These two reflecting elements will emphasise the movement of light and shadow inside the Pavilion over the course of the day. As the sun moves across the sky, reflected and refracted by these features, visitors may feel a heightened awareness of time spent in play, improvisation and contemplation over the summer months.

“My design for the Serpentine Pavilion 2018 is a meeting of material and historical inspirations inseparable from the city of London itself, and an idea which has been central to our practice from the beginning: The expression of time in architecture through the inventive use of everyday materials and simple forms. For the Serpentine Pavilion, we have added the materials of light and shadow, reflection and refraction, turning the building into a timepiece that charts the passage of the day,” explained Escobedo.

User perception
According to David Glover, technical advisor for the project, the Serpentine Pavilion is about providing the architect with the opportunity to use everyday materials in an innovative and creative way, challenging the user’s perception of architectural form and how buildings function. “Frida has certainly delivered on this with her design, which generates a series of interlinked spaces that come alive through the clever use of light, shadow and reflection, while maintaining a visual connectivity to the park. The Pavilion will delight and surprise its visitors,” he commented.

The Serpentine Pavilion is consistently in the Top 10 most visited architecture exhibitions in the world. There is no budget for the project, which is realised entirely through sponsorship, in-kind support and the sale of the Pavilion.

This year’s pavilion is sponsored by Goldman Sachs and will be open to visitors from 15 June to 7 October 2018.

Full thanks and acknowledgement are given to the Serpentine Gallery for the information and images provided. 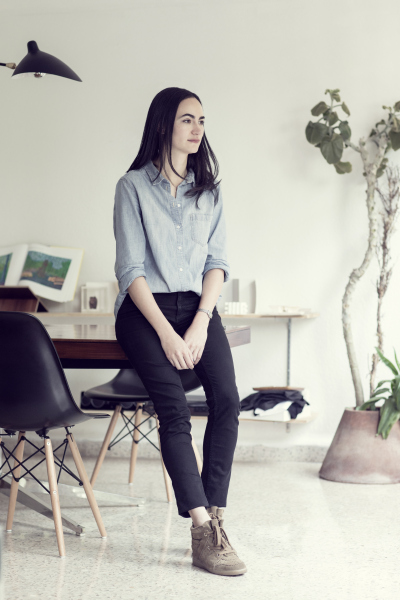 Frida Escobedo (born 1979)
Her award-winning work has focused mainly on reactivating urban spaces that are considered to be residual or forgotten, and ranges from housing and community centres to hotels and galleries:
–    In 2004 she was awarded the Scholarship for Young Creators by the National Fund for Arts and Culture (FONCA).
–    In 2006, she founded her practice in Mexico City.
–    In 2008 she was selected by Herzog & De Meuron as one of the architectural studios to participate in the Ordos 100 Project in Inner Mongolia, China.
–    In 2009, she was a winner of the Young Architects Forum, organised by the Architectural League of New York.
–    In 2013, she was selected as one of the three finalists for the architecture programme at the Rolex Mentor and Protégé Arts Initiative, and was nominated for the Arc Vision Prize for Women and the Iakov Chernikhov Prize.
–    In 2014, she was selected as a finalist for the Designs of the Year at the Design Museum in London and was nominated for the Mies Crown Hall Americas Prize of the Illinois Institute of Technology. In the same year, she won the Ibero-American Biennale of Architecture and Urbanism Prize (IX BIAU) in Rosario, Argentina.
–    In 2017, she received the Emerging Voices Award by the Architectural League of New York.

Serpentine Galleries artistic director, Hans Ulrich Obrist, and chief executive officer, Yana Peel, say: “We are delighted to reveal the designs for Frida Escobedo’s Serpentine Pavilion – a living timepiece in the park, powered by light and the Prime Meridian line. In its beautiful harmony of Mexican and British influences, it promises to be a place of deep reflection and dynamic encounter.”

6 top picks from Revestir in the latest Floors in Africa!