France has always been synonymous with beautiful stone buildings, until the introduction of béton armé changed all that and concrete became an expression of modernity.

The Delas Frères Winery is in the dense town centre of Tain l’Hermitage, on the left bank of the Rhône River in south-eastern France. It is at the foot of terraced, sun-soaked hills that have yielded exceptional grape-bearing vines since Roman times, and that served as inspiration for a signature element of the new winery.

Wall of waves
The site included a rundown manor house – renovated as a guest house with a restaurant and tasting rooms – and a garden once belonging to an old winemaking family, which Svenstedt has maintained as part of the winery’s identity. He designed a straightforward stone wine shop along the street-facing edge of the property, but the coup de théâtre is a 79.8 meter-long wall of waves at the opposite end of the garden, fronting the 3 158.70 square meter wine-production facility.

The 7-meter-high structural facade is made entirely of load-bearing blocks of Estaillade stone, each weighing over two tons and extracted from farther down the Rhône. The blocks are held together horizontally by steel cables in grooves, as well as post-tensioned vertical steel cables that anchor the wall to the foundation.

Robot’s precision
The 508 mm-thick blocks were wire-cut and sculpted by a robot at a facility just 20 minutes away from the site, which typically produces decorative stone fireplaces and balustrades. Svenstedt says: “If you can do it for classical architecture, why not something contemporary?”

The design team also considered other materials – an analysis showed that building it in concrete would have used up four times more embodied energy – but the thermally inert stone was perfectly suited for this type of processing and storage facility, and did not require a complex wall assembly with cladding and insulation. “Stone turned out to be easier, less expensive and more ecological,” explains Svenstedt.

To create the unique facade, sandstone was quarried down the river in Provence. The winery is included in the New Stone Age exhibition at London’s Building Centre, which demonstrates projects that use stone as a structural material in contemporary buildings. 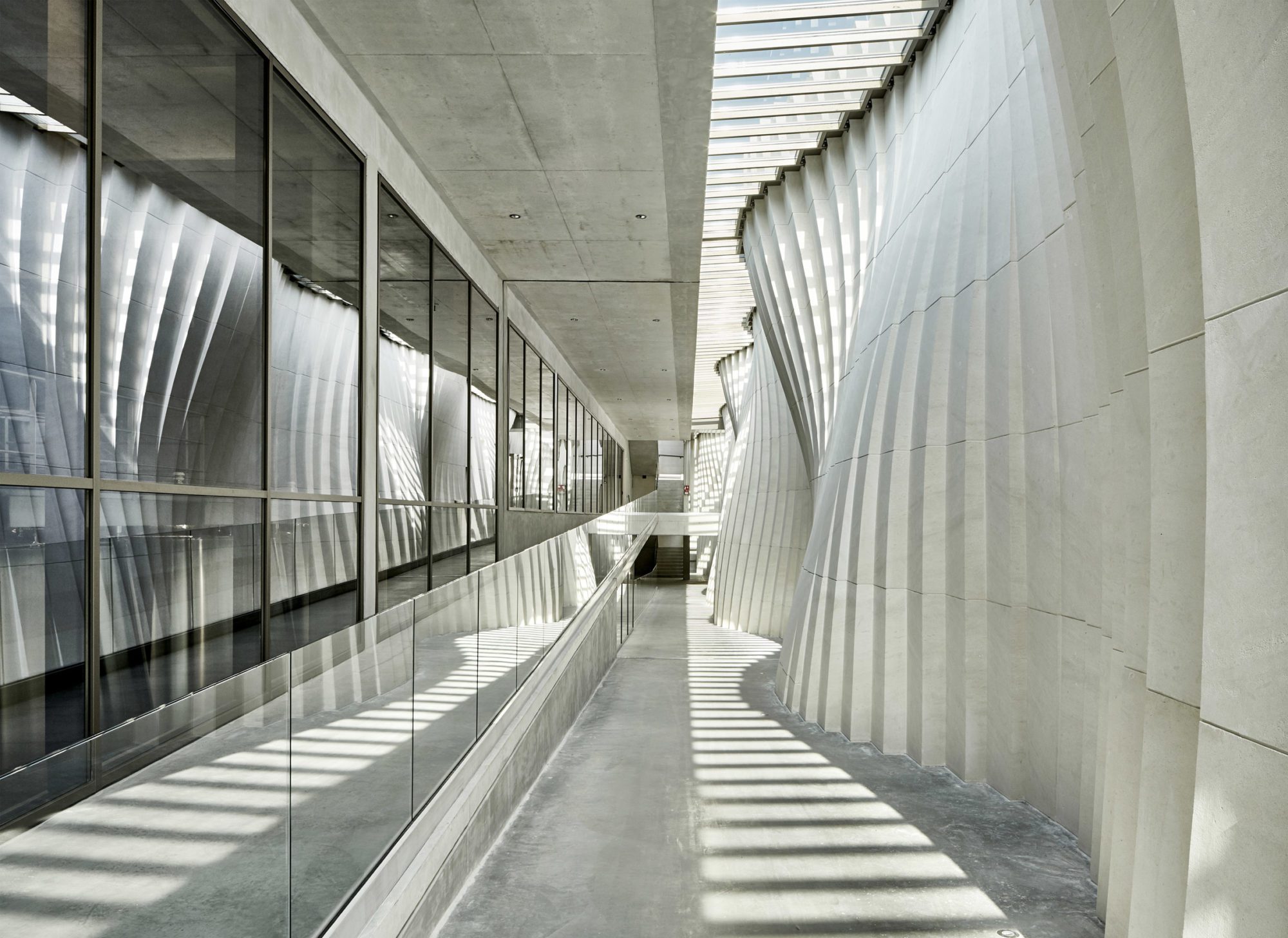 A skylit ramped area lies behind the wall of waves and allows visitors a peek into the winemaking facility’s interiors.

Soft to touch
The porous limestone is softer and easier to cut than other rock types, especially right from the quarry, when still tender.

“This winery is built to be touched,” said Svenstedt. “The tender, relatively light sandstone is ideally adapted to massive stone construction, being workable and best in thick structural blocks.”

He says it took three months to shape all the stone, which was installed by the same father-and-son team of masons. “They are artisans who are not afraid of technology.”

According to Svenstedt, the design process happened backwards. He first drew the undulations intuitively, having “learned some tricks from the masons”, and then put them in parametric software. A skylit, ramped area lies behind the curving wall, allowing visitors to discover the winemaking process and proceed up to the planted roof with views to the hills and town. He says: “The wall is the convergence of the whole project.”