A socially sensitive approach was required for the redevelopment of the “Integratives Bauprojekt am ehemaligen Blumengroßmarkt” (IBeB), situated on the municipal site between the Jewish Museum, the new TAZ building and the former flower wholesale market hall at Kreuzberg in the significantly historical area of Berlin, an area characterised by post-war housing and buildings that were constructed for the 1984/87 International Building Exhibition. The site is situated in-between a Jewish Museum, which today uses the former market hall, a publishing house and various other cultural and creative enterprises.

The objective was to create an integrative, social mixed-use building that could accommodate a diverse range of residents, and the winning concept was submitted by architect working group ifau |Heide & Von Beckerath in cooperation with Selbstbaugenossenschaft Berlin (building cooperative), to offer a mix of workshops and apartments that would meet the needs of artists and creative professionals. 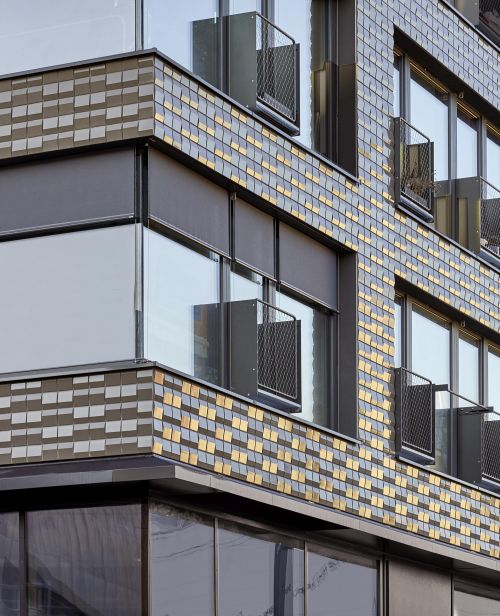 The special effect of the ceramic elements, which are identical in themselves, is created by the mounting which is always rotated in pairs by 180°. Courtesy of AGROB BUCHTAL GmbH / Jochen Stüber, Hamburg

Custom-made for a great effect
For the building envelope, the architects wanted a building material as technically elegant and robust as the raw exposed concrete, metal and wood surfaces of the surrounding buildings, and which would also do justice to the special location of the building.

“We wanted to create a facade from a material that would be neither light nor dark and would also contribute to urban quality,” says Carolin Gyra, project architect at the Heide & Von Beckerath architectural office.

The three-dimensional, medium-grey, 157 x 158mm glazed ceramic elements used to clad the mineral ETICS facade were developed by the architects and Agrob Buchtal specially for this project to create a facade consisting of thousands of “pixels”. Depending on the viewpoint, the facade sometimes appears light and other times dark.

This shimmering effect of the identical pixels is due to the slightly iridescent colours of the ceramic elements fired in a tunnel kiln, its irregular triangular cross-section, which produces two differently inclined faces, and its mounting, which in pairs is always rotated alternately by 180°, randomly reflecting light. 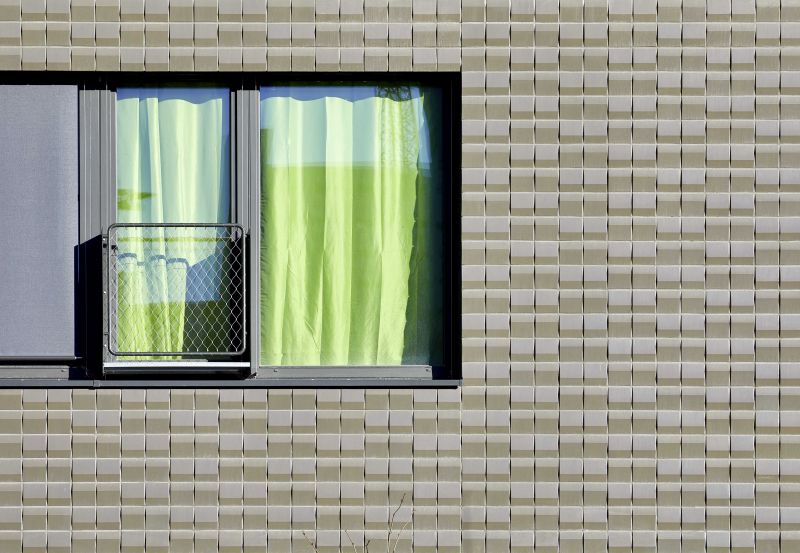 The facade can also appear as a homogeneously structured surface, from which the window openings are cut out. Courtesy of AGROB BUCHTAL GmbH / Jochen Stüber, Hamburg

Calculated installation
Using the “buttering-floating method” of laying mortar, the ceramic pixels were installed with application on both the reinforced flush-mounted layer of the ETICS composite thermal insulation system as well as on the reverse side of the ceramics.

Thanks to the small size of the elements, the joint portion required for ETICS facades to ensure enough vapour diffusion was easily achieved. In fact, extensive modelling was done in advance and the material thickness was balanced by the manufacturer in such a way that the stability is guaranteed, and an impermissibly high surface load is avoided. 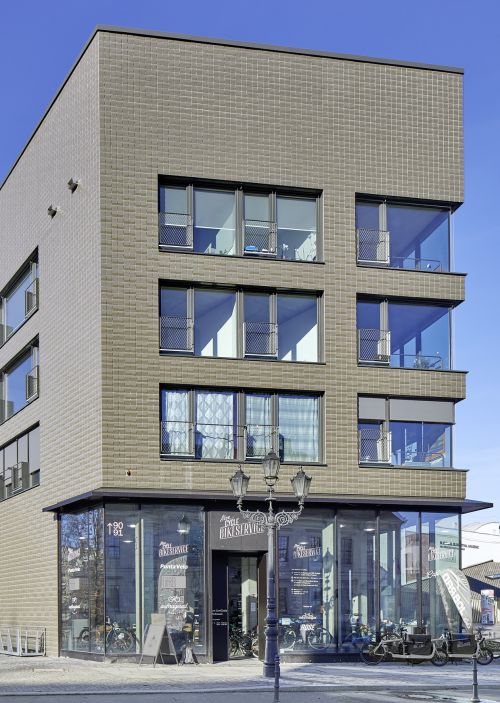 A 3D masterpiece
In terms of base material, glaze and colour, the ceramic elements correspond to the two-dimensional flat tiles of Agrob Buchtal’s Craft series. The comparatively slight change in the orthogonal standard cross-section alone resulted in a characteristic three-dimensional product, which contributes significantly to the unique appearance.

This uniqueness was honoured with the BDA Prize Berlin in 2018. The IBeB was also a finalist in the Prize of the German Architecture Museum in 2019 and was shortlisted for the Mies van der Rohe Award in 2019. 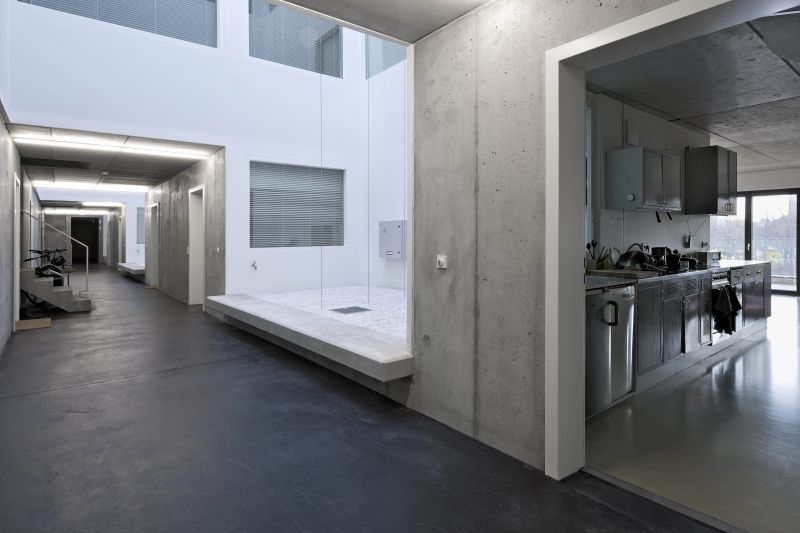 The access path on the second floor has five atriums which provide lighting for the apartments and offers space for common social activities. Courtesy of Agrob Buchtal GmbH / Andrew Alberts, Berlin

A city within a city
The layering of the various uses is clearly visible from outside through the glazing of the two lower storeys. Here, in addition to a bicycle shop and a restaurant, there are studios for artists and other creatives, while 66 apartments, ranging between 24 and 132m² in size, some of which are double-storey, are located above. These can be easily linked or divided to adapt to changing user requirements. They are accessible by paths arranged centrally on the second and fifth floors and are interconnected by five greened atriums, which provide lighting for the apartments up to 23m deep and at the same time serve as common rooms.

Also, thanks to internal cross-subsidisation by means of a higher price per square metre for the owners, the rent for cooperative members is comparatively low at 9,50 euros/m².

Full thanks and acknowledgement are given to Agrob Buchtal for the information and images contained in this article.

An interview with the Baron of BIM

Nonwoven possibilities are stretched at Techtextil 2019