A new public library and community park called Springdale Library and Komagata Maru Park was recently developed in Brampton, Canada, creating an inclusive gathering place that adds dimension to the flat suburb and is a point of pride for the city. The mountainous green roof is a defining feature of this project and was integral in the conceptual strategy of the architecture for the building to be an extension of a park landscape.

Complex geometry in roof curvature
Tyler Sharp, design principal at RDH Architects (RDHA), a Toronto-based architecture firm, says the 2 418m² project, which includes the approximately 600m² green roof, was developed in a construction budget of $16 670 000. He says the most unique characteristic of the green roof is the complex geometry in the compound curvature of the built hilltop, which needs a particular green-roof tray system with integrated irrigation and planting types.

“The roof’s raised hilltop gives the library height in an otherwise flat landscape and is one of the building’s LEED Gold features with electric car-charging stations, geothermal heating and cooling, as well as greywater systems. A team of approximately ten people including architects, mechanical engineers, a geo-raster green-roof tray system manufacturer, a general contractor and landscape professionals worked on the roof,” says Sharp. 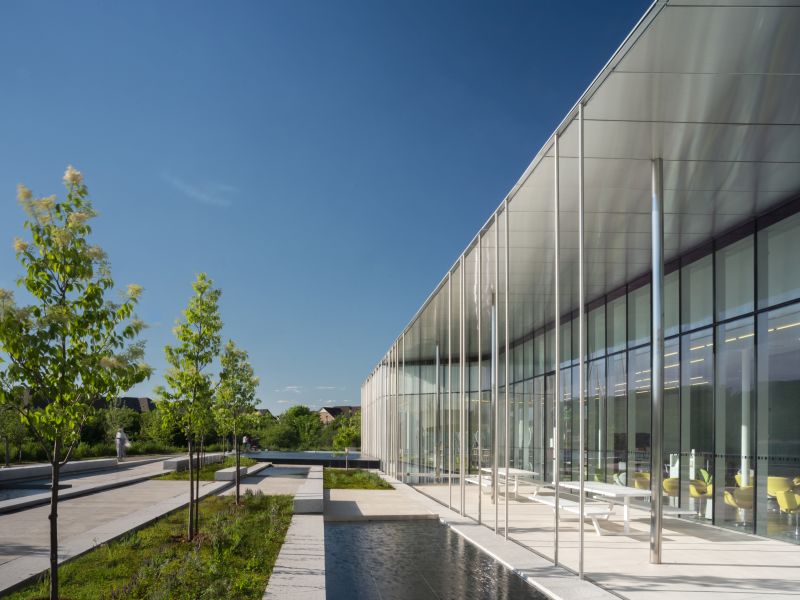 Green roofs show respect for nature
According to Sharp, the benefits of having a green roof are that it softens the architecture of the building, beautifies the public space, reduces the amount of city storm water and lessens the urban heat island effect for the area. He recommends the integration of green roofs on most types of architecture projects, as they add beauty to structures, illustrate respect for the natural world and provide a level of sustainable performance.

The goal of RDHA was to design the project so that it would be as much about the building as it is about establishing a landscape. They also wanted to reflect the vision of the library institution, which is to express inclusivity, innovation, dedication to learning, collaboration, curiosity, courage and accountability through the design. 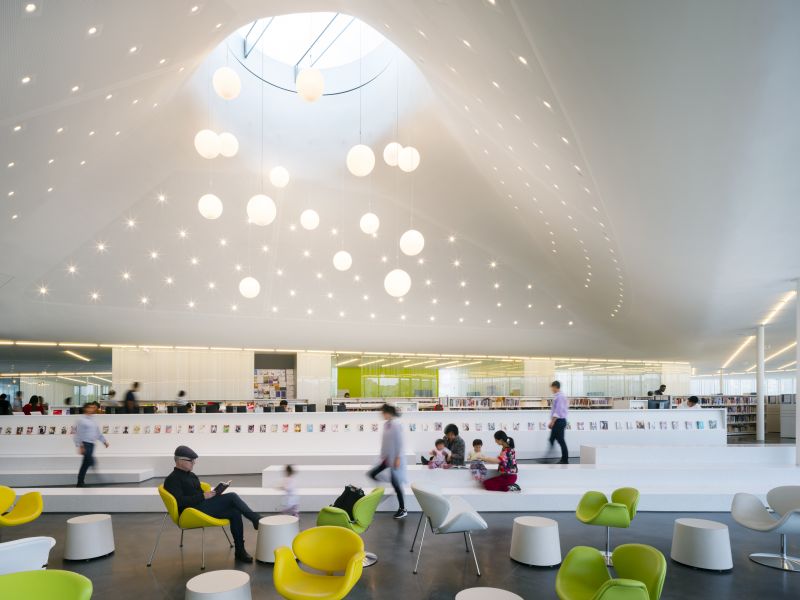 The organic nature of the interior was conceived as a landscape for exploration to draw connections with the adjacent park. PHOTO: Nic Lehoux

Appears as book pages or tree trunks
The irregularly shaped building is inspired by the overall triangular geometry of the site and seamlessly integrates universal design principals, demonstrating the highest levels of achievement in dignity and sustainable design. It is framed by a commercial plaza to the east, a main road to the south and a natural ravine to the north and west.

The classic-meets-contemporary building appearance helps establish a sense of familiarity and its porous circulation allows the public to weave through layers of the building. The connections between the aluminium curtain wall, floor-to-ceiling windows and steel columns appear seamless and encourage exploration of the building facades, while aiming to relate to the turning pages of a library book or tree trunks in a forest. 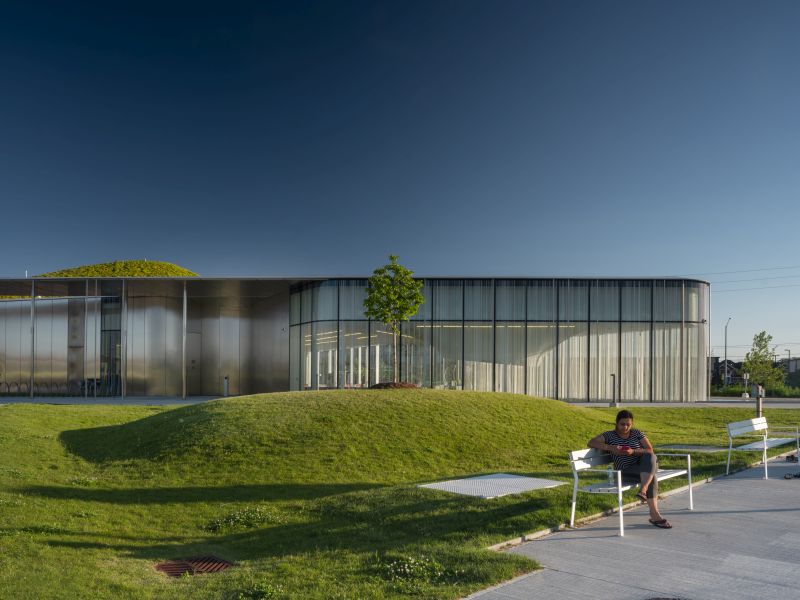 Organic interior connects to park
The interior consists of 1 860m² of library space combined with a 46m² multi-purpose community room which can be used for drop-in activities, as an indoor lounge for seniors, birthday party rentals or public meetings. He says the organic nature of the interior was conceived as a landscape for exploration to draw connections with the adjacent park.

A green “moss-like” carpet and the adjacent pool blur the boundaries between inside and outside, while the topographic ceiling descension creates an otherworldly atmosphere. The restrained colour palette of the interior contributes to a sense of clarity and calm to ensure focus and concentration for those within the building. 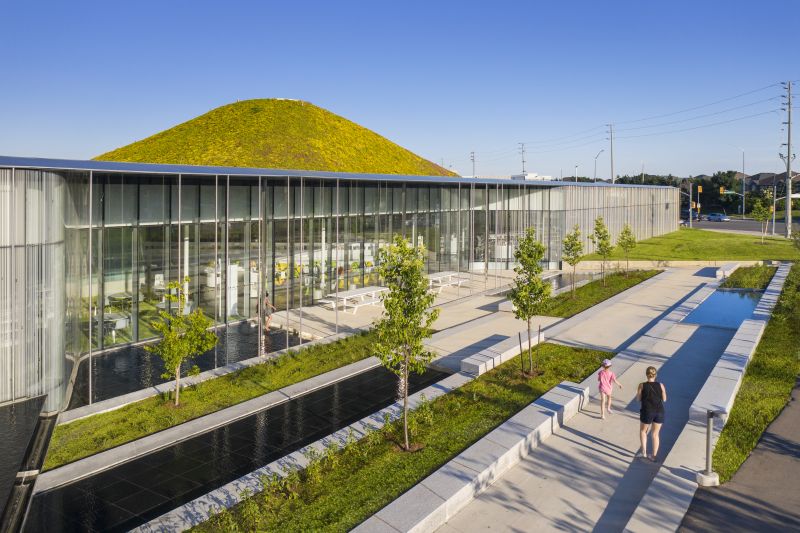 The mountainous green roof is a defining feature of Springdale Library and was integral in the conceptual strategy of the architecture for the building to be an extension of a park landscape. PHOTO: Nic Lehoux

Project parts blend into each other
The building’s windows are covered with a solar-responsive ceramic frit pattern which helps reduce glare and minimises solar transmission into the building. Their striated patterns range from white to dark grey, expanding and contracting based on solar orientations, while visually merging with a series of stainless steel rods adding another layer of solar resistance.

Sharp says the architects positioned the library as close to the street as possible to solidify the building’s presence with the street, preserve the site’s natural topography and irrigation patterns, and channel interior views towards the ravine. He says the organically shaped perimeter joins the building and courtyards to the undulating topography between the fluidly shaped ceiling, mountainous green roof and sloping floor slab of the interior, with the flat landscape of the park. 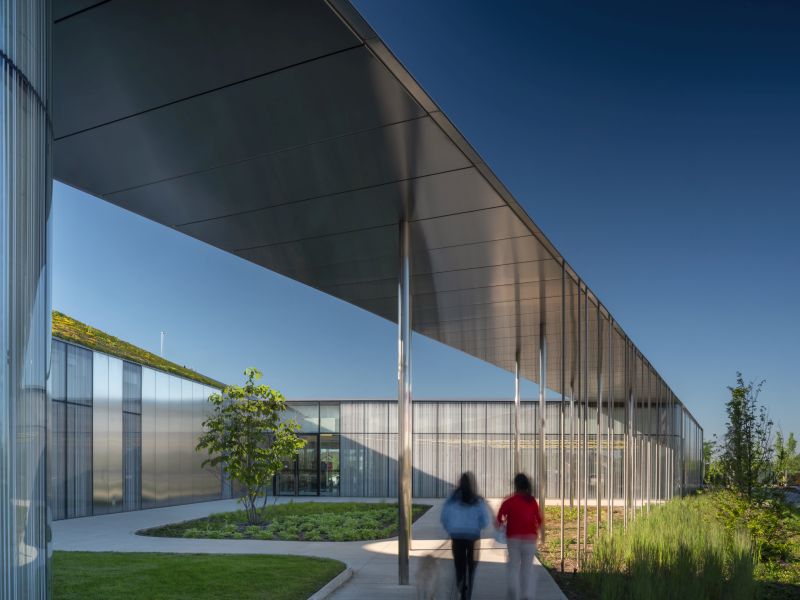 Park draws in community imaginatively
According to Sharp, the position of the building also maximises room in the rear for a neighbourhood park and a parking and drop-off sequence with a canopied entry forecourt. He says the park has a series of terraced gardens for older users, a splash pad and children’s play area with five-metre-high letters oriented in horizontal and vertical planes, creating the word “Imagine” for children to discover.

“The imaginative architecture and landscape of Springdale Library add interest to its surroundings, and each element highlights our practice of applying conventional budgets and materials to design unconventional buildings. This project has a bold presence in Brampton, seamlessly blending building and landscape, and is a valuable resource to the community,” says Sharp.

Acknowledgement and thanks go to RDH Architects for the information contained in this article.

The Cube – the world’s first building made...

Get stuck on sustainability