Along with the incredible merchandise that it stocks, what’s inside the new Apple Aventura store in Miami is not what has the community talking – it is the store’s creative concrete roof and its natural interior.

Located in the Aventura Mall shopping centre in the north of Miami, the new Apple Aventura store is similar to other stores around the world created for Apple by Foster + Partners, a British architecture firm that is also responsible for this one. However, what sets it apart is its concrete roof which boasts an intriguing white, wavy design reminiscent of the modernist buildings of Miami’s South Beach built way back in the 1930s, which feature white concrete, curved walls and geometric details.

“The language and materiality at Apple Aventura Mall are inspired by Miami’s white Art Deco traditions and climate, making it an expression of its place and culture. We love the honesty and the purity of the concrete,” said Stefan Behling, Foster + Partners’ head of studio.

In short, the goal was to design a store that not only epitomised the Apple brand itself, but also acted as a proud symbol of its location.

The roof’s structure is comprised of seven white, pre-cast concrete arches, each of which is 20 feet/six metres wide. Thin steel columns, which are also white in colour and clad in concrete casing, are responsible for providing support to the barrel-vaulted ceiling. The ceiling itself is covered in a thick white fabric for acoustics purposes and is made up of beams that measure 80 feet (24,3m) and span between pillars spaced 60 feet (18,2m) apart.

The interior of the Apple Aventura store is just as beautiful and complex as its exterior. The boxy, two-storey building is enclosed by transparent glass walls and features a number of green, leafy trees inside. This interior design closely follows the aesthetic of various other Apple stores from around the globe.

Jonathan Ive, former Apple chief design officer who worked closely with Foster + Partners regarding the design of the new Apple store, says: “This store is very ‘Miami’ to me – its special trees, the light and the new roof. It is also quintessentially Apple, marrying the outdoor lifestyle with a sense of freedom and creativity that is intrinsic to the way we work.” 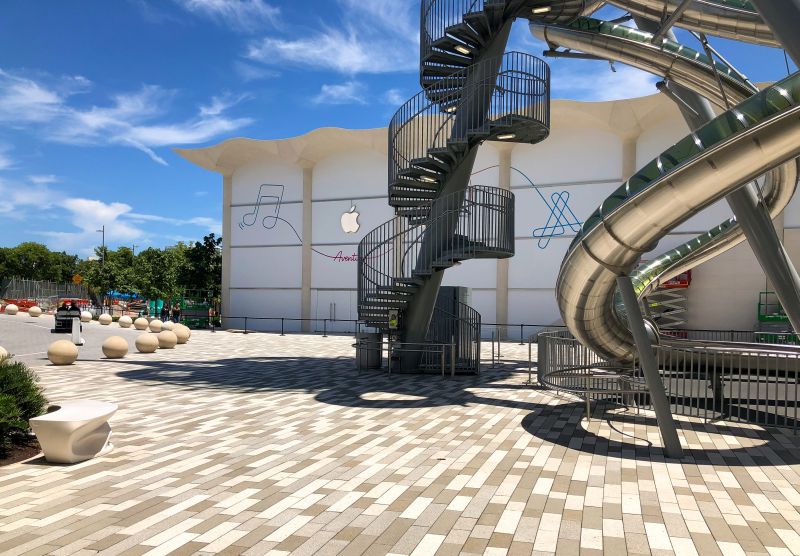 Apple Aventura is the very first Apple store to be built of white precast concrete. The reason why it was the material of choice this time around? According to insiders, the material is a continuation of its application at Apple’s headquarters in Cupertino, which was completed by Foster + Partners in April 2017.

Foster + Partners is also the firm behind the impressive design of other Apple stores in the United States of America (USA), including the ever-popular Apple Michigan Avenue in Chicago. This building boasts a roof that resembles a Macbook, and a store inside a historic Washington DC library.

Who knows what this architecture firm will surprise the world with next?

Full thanks and acknowledgement are given to www.dezeen.com for the information contained in this article.

Longevity, indoor comfort, guaranteed – all from a...

The benefits of roofs that harness solar energy