In the early hours of Sunday, the 28th of May 2017, a devastating fire swept through the main operating areas of the Lanzerac Hotel, destroying several sections. However, this tragedy also served as a catalyst for uncovering the fascinating heritage of this 326 year-old Winelands escape, which visitors can now explore for themselves.
Lanzerac is steeped in spellbinding history, having been established in 1692 – a mere 13 years after Stellenbosch itself and is the third oldest farm in the area.

The first owner was Isaac Schrijver who planted the very first vineyards and, unsurprisingly, named the farm Schoongezicht, meaning wonderful view. It was the drive of Schrijver’s wife, Anna Hoeks (AKA the Widow Hasselaar), that saw the farm grow through the acquisition of adjacent farms – a tradition that continued via her domineering daughter-in-law, Maria Elizabeth Hasselaar (nee van Coningshoven) and great-granddaughter, Anna Groenewald (nee Hasselaar).

During Maria’s last few years of ownership, it is believed that what is now the fine dining restaurant, might have been either a smithy or distillery, before becoming a cellar. As the farm’s winery began to flourish, the cellar area was expanded by amalgamating it in the late 18th century with another building, known today as the Taphuis. These are the areas that bore the brunt of last year’s blaze. 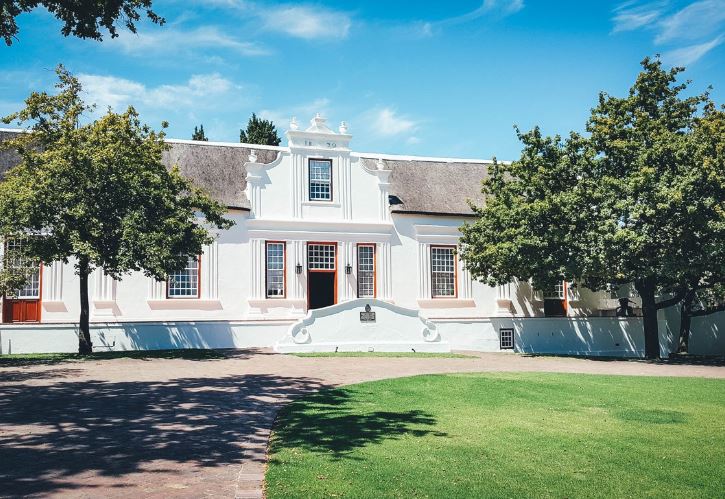 Over the years, Schoongezicht passed through a succession of owners who each contributed by building on to the farm. The fire stripped away the layers of renovations and additions that they made over the course of the estate’s enthralling lifetime as it changed and grew.

Project Co-ordinator and Designer, Con van der Colff, who was enlisted to restore the Grande Dame of Stellenbosch to her former glory, shares: “The cellar is one of the oldest buildings on the property. The fire has enabled us to now get a glimpse into its ‘DNA’, by revealing the brick walls which date back to the mid-1700s, along with the numerous alterations that transformed the building over the years, such as infills in openings and doorways, the laying of slate floors in the 1950s and new walls replacing old ones. In the re-construction of the building, we have decided to showcase these ‘battle scars’ along with the charred remains of previous fires, as well as the most recent one, so that the estate’s stories can be physically relayed, not covered up again and forgotten.”

After the Widow Groenewald’s death, Schoongezicht was sold several times until it came to be in the hands of Coenraad J. Fick, who owned the estate between 1808 and 1841. He is responsible for building the iconic Manor House that still awes guests as they ascend the Estate’s tree-lined entrance.

Later, the Manor House and Werf, now a Provincial Heritage Site, with its unrivalled view of ‘Die Pieke’ (Jonkershoek’s Twin Peaks), underwent significant changes by one of the property’s most influential owners, Elizabeth Catherina ‘Kitty’ English, who bought Schoongezicht for £18,000 in 1920. “The building’s current façade is a testimony to her touch and I think the appearance might have been less elaborate had she not changed it,” says van der Colff.
In addition to her ornate detailing, Mrs English changed the estate’s name to Lanzerac, presumably after General Charles Lanrezac – a French General, who commanded the French Fifth Army at the outbreak of World War I. She also transformed it during her nine years of ownership into one of the most modern wineries in the Cape, laying the foundations for Stellenbosch’s world renowned wines. In fact, she was responsible for the extension of the cellar (today the Governor’s Hall) which most likely celebrated Abraham lzak Perold formulating the world’s very first Pinotage on the property in 1925. 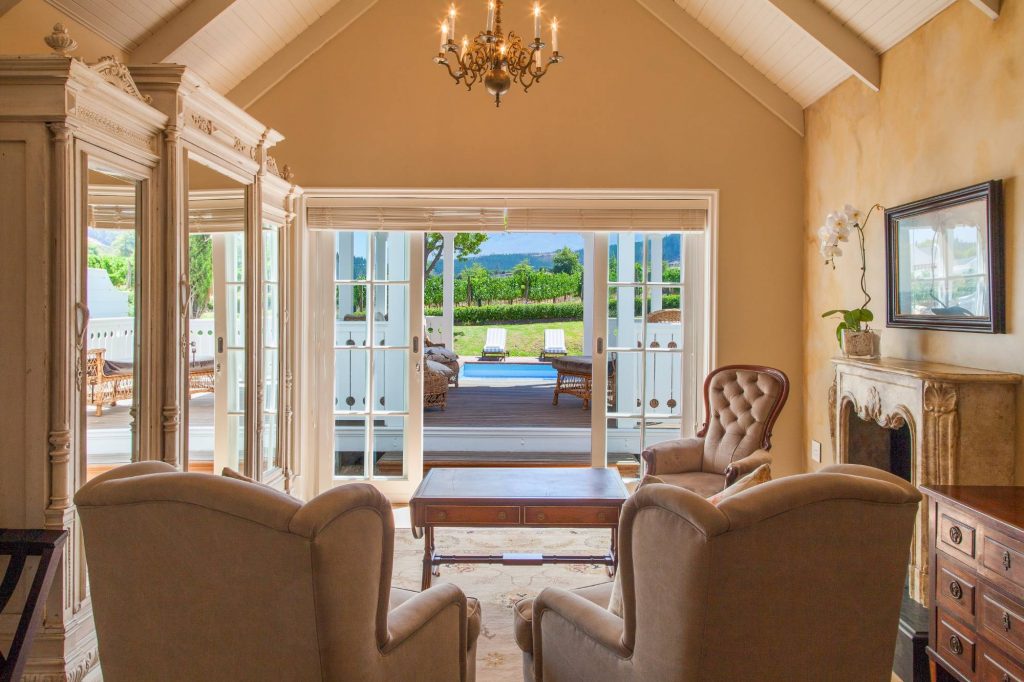 Sadly, this formidable woman, who in her late 70s successfully shook up the Stellenbosch wine route, passed away in 1929. Sadder still was the fact that the estate stood empty and unused from the time of her death until 1934, due to the unfortunate consequences of the terms of her will. She demanded that her estate offer the Lanzerac Farm to the four sons of her late brother – from oldest to youngest – at ¾ of its value. However, none were able to purchase it, particularly as it was the time of the Great Depression. Finally, it was bought at a fraction of its original value by Jacobus Tribelhorn – the builder who had extended the Manor House for Mrs English. He continued her legacy of producing wines of exceptional quality.

The wine farm’s next owner, Angus Batts Buchanan, took the estate’s reputation to another level by winning several awards for the wines, sherry and brandy that he proudly produced and, in doing so, established Lanzerac as a leading brand. He later sold some of the land for town development and, in honour of his daughter, named it Karindal. Today, this is a suburb of Stellenbosch and the estate’s original gates are still located here.

Buchanan’s nephew, ‘Lord’ David Rawdon, ushered in an exciting new era, when he purchased Lanzerac in 1958, by converting the farm into an elegant hotel and landmark. He turned the old cellar and its surrounding buildings into bars and lounges, converted the 1925 cellar into the main dining area and transformed the farm’s homestead, barns, cow sheds and stables into hotel rooms furnished with English and Cape antiques (a tradition that endures to this day).
Since the 1960s, Lanzerac has beckoned discerning travellers from home and abroad (known as The Swallows, for making it their home for the summer season). It was best described in 1964 by Sunday Times columnist, Molly Reinhardt, who said: “It isn’t a hotel, it’s a way of life. They leave you to your own devices and if you haven’t got any devices, it’s not for you.” Rawdon’s work was later enhanced with the Hotel being brought in line with five star standards.

Today, with the evolution of the estate’s buildings now being evident, visitors can travel back in time and explore the history that envelops Lanzerac and gives it its unique old world charm.

To be immersed in Lanzerac’s legacy, make a booking at http://www.lanzerac.co.za.

RECAP of SAPOA winners for 2018

Fire Tests successfully passed for both 60 and...

A guide to rainscreen specification

Fire compartments can save a building

The rock ‘n’ roll legends that are the Rolling

Located in the heart of West Hollywood, this new e

One of the biggest challenges for industries is ke

The project is located in Binjiang Junyuan Distric

A private family home located in an urban environm

@coulon_associes As part of an urban renewal sche

During the COVID-19 pandemic, due to the lack of e


Error: API requests are being delayed for this account. New posts will not be retrieved.