Low-cost housing remains a challenge in South Africa, but it also opens up opportunities for innovative thinking and alternative ways of building. One such concept, the second phase of the Empower Shack project in Khayelitsha, Cape Town, has made the Royal Institute of British Architects (RIBA) International List 2018 – a selection of the world’s best new buildings from entries received.
In 2013, when Andy Bolnick, founder of Ikhayalami, a local non-government organisation (NGO) that focuses on technical innovation for informal settlement upgrading, met Urban Think Tank founding partner, Alfredo Brillembourg, an idea started which would change the lives of many shack dwellers in South Africa and which could potentially reshape the approach to informal settlement upgrading.

Urban Think Tank holds the chair for architecture and urban design at the Swiss Institute of Technology, ETHZ in Zurich. The project is further supported by a professional local team of engineers, architects, quantity surveyors and landscaping architects.

Two years later, the first four prototypes were built in BT Section in Khayelitsha on land that belongs to the City of Cape Town, about 100m away from the main informal settlement. In the meantime, the main informal settlement comprising 68 dwellings had to undergo a process of rezoning from public open space and parks to housing. The construction on the main site is being done in phases with 16 under construction now set to be completed by the end of March and another 20 to begin in April. 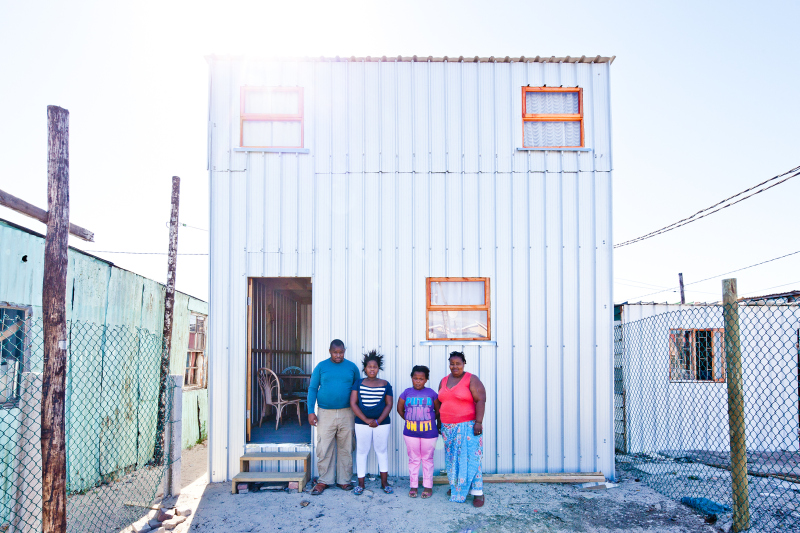 The second prototype, based on a shack upgrade, which was built in-situ in BT Section, with the happy Phumezo family in front. Courtesy of Daniel Schwartz, UTT

The concept
Initially intended simply as a double-storey shack upgrade with galvanised zinc sheeting and a timber frame, the concept has since evolved into a far more permanent structure, explains Bolnick. “Following engagements with the City of Cape Town, the design typology was amended to include concrete block walls as fire breaks as well as a concrete floor to divide the vertical structure instead of a wooden one to increase its fire resistance properties,” she states.

The houses are arranged around a sanitation core, which provides water and toilets on site. What’s more, the design model is available in six sizes ranging between 40m² and 88m², which gives residents a choice depending on their current structure size, family needs and affordability.

More houses on a smaller site than RDP
An integral focus of the project is the densification of housing – using the land more efficiently so that residents can remain in the communities they call home. “Land is becoming increasingly scarce and we don’t want to keep pushing the poor further out of the city,” Bolnick says.

“Currently, through the low-cost housing and housing subsidy programme, the smallest prescribed plot size is 90m² and in some provinces it even goes up to 150m²,” says Bolnick. “This leads to rows and rows of low-density, single-dwelling, RDP-type houses. But by going vertical and making the footprint of the structure smaller, people can get the same square metres as an RDP house or even bigger.

“We are therefore pushing for the allowance of subdivision of less than the prescribed 90m². With cities densifying, this is what is needed – we can’t just continue with the single-dwelling typology which the Reconstruction and Development Programme has previously been focusing on,” she explains.

“In essence, we took head from what is already happening. Even shack dwellers are going double-storey to accommodate their families. We just looked at what people are already doing and are assisting them to improve upon it.”

Funding model
Importantly, although Urban Think Tank/ETHZ has raised funds for the project, a well-thought-out micro-finance model encourages community members to become long-term stakeholders in the project by contributing to the building cost of their houses.

Currently, residents pay an average of 14% of the construction cost, depending on the footprint of the house and household affordability assessments.

Ikhayalami and the City of Cape Town have further signed a memorandum of understanding for an advanced re-blocking, which sees the city being responsible for one-to-one infrastructure services for every household, such as water and sanitation, electricity, roads and storm-water management.

Community involvement
Bolnick contributes a large part of the success of the project to ongoing engagement with the community. “Every step of the way there had been consultation and discussions, and the community has been an intricate part of the design process. After all, it is their houses, their lives and their futures. And we have had a lot of interest from surrounding communities requesting similar projects,” she says.

“Ikhayalami has been working with communities for many years in terms of re-blocking and spatial reconfiguration. So we have a really strong track record with communities and there is a deep level of trust from all sides. With these kinds of projects, one has to be committed for the long haul, and not shy away from the many hurdles that will come your way.”

The award
The 2018 RIBA International Prize will be awarded to a building which exemplifies design excellence, architectural ambition and delivers meaningful social impact. The winners will be announced in December this year.

Full thanks and acknowledgement are given to Ikhayalami for the information given to write this article. 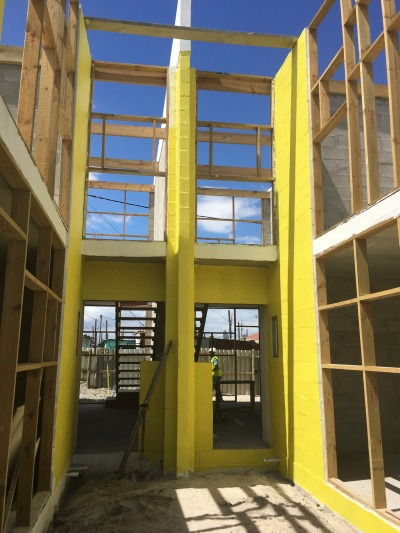 The structure of one of the Empower Shacks coming along. Courtesy of Andy Bolnick, Ikhayalami