How to plan and build a stable segmental retaining wall. (SRW)

Segmental Retaining walls are becoming more and more popular throughout the world, because of the relatively low cost, ease and speed of construction, ability to conform to most contours and suitability in some instance of the wall to greening and vegetation.

Upon interviewing three industry experts, it became very clear that there are differing opinions on specific issues that need to be addressed and further explored to ensure a successful retaining wall installation. We highlight these issues and address them as follows:

1. The difference between a hollow and solid block

Hollow blocks utilise soil, gravel or concrete infill to increase the facing’s design mass. They are generally placed in a closed-face configuration, except in South Africa where open-face configuration is also popular in some areas although not advocated by two of those interviewed. Solid blocks only utilise their own concrete mass which is generally higher than that of infill in hollow blocks and generally used for walls steeper than 75°.

2. An open-face versus closed-face retaining system

International practice: The use of open face assembly is not considered to be good practice throughout other parts of the world except for small gravity walls in gardens where the walls need to be planted. No design codes exist, detailing how one should consider open face assembly incorporating the three-dimensional effects of clamping geogrids on block contact points only.

Design considerations: A closed-face system generally requires more blocks per square metre of wall, all fully filled as specified, and is thus heavier than open-face systems which contributes to the increased stability of both gravity and geogrid reinforced SRW. This open block assembly results in a lesser constructed mass, which is more difficult to compact, and generally results in decreased long-term integrity of the drainage layer and backfill behind the wall which may erode over time.

Van der Merwe et al (2019) undertook pull-out resistance tests on geogrids in both an open and closed face assembly. These tests showed reduced geogrid-block connection capacity of the open block assembly of up to 2 to 3 times that of an equivalent closed block assembly.

When reviewing the increased cost of the grid required at the facing due the above tests, open block assembly should only be economical up to about 3.5m, depending on the block type and face angle before the required geogrids start to govern the cost of the wall. Realistically open assembly should be limited to light gravity walls.

Planting: Open-face and closed-face configurations less than 75° wall slopes are more plantable and will result in soil filling the voids between block washing out over time.

Steeper slopes make planting more challenging, but not impossible to achieve. Steep and high walls should generally as a rule of thumb be more maintenance free and should not require irrigation nor weeding etc and therefore a close block configuration is normally preferred. 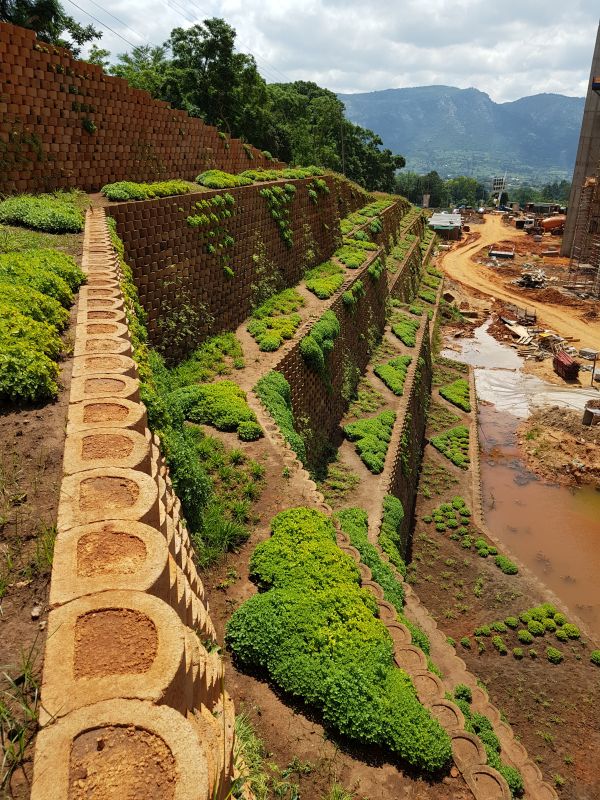 3. The limitations of solid blocks vs hollow core blocks

Hollow core configuration is always more economical than solid block because of the concrete volume required to create these blocks are smaller.

5. Installation factors that need to be considered

As a rule of thumb, walls up to 1.4 m are deemed “fit for purpose”, i.e. no engineer’s design is required unless the walls are very steep or have loads such as roadways above them, and only a cement-stabilised foundation is required. Any higher wall requires an engineer’s design with concrete foundations, subsurface and surface drainage detailed, the quality of fill and the required compaction, geosynthetic reinforcement or cement stabilisation in the fill. In most cases streict surveying tolerances should also be adhered to and continuously monitored during construction. The installation process must be carried out by an experienced contractor and supervised by the engineer or a suitably qualified professional. 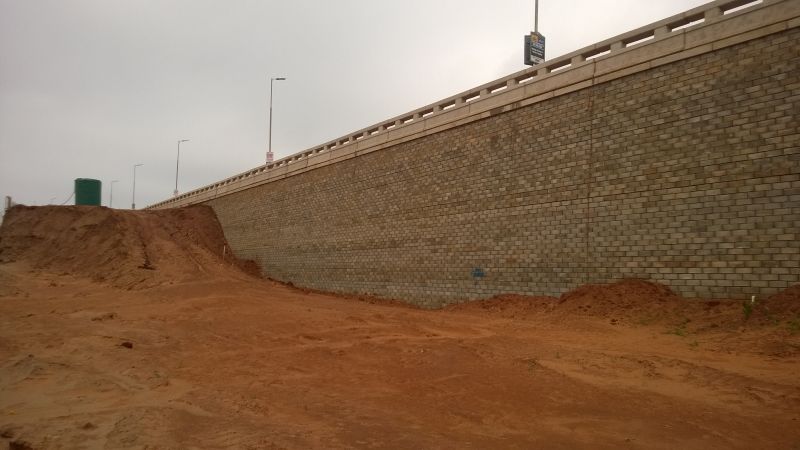 Any higher wall requires an engineer’s design with concrete foundations, subsurface and surface drainage detailed, the quality of fill and the required compaction, geosynthetic reinforcement or cement stabilisation in the fill. Courtesy of GaGE Consulting

6. The importance of backfill compaction

Inadequate compaction of the backfill and a lack of the drainage layer are the main causes of some failures that have been seen in segmental block walls. Backfill or relatively high walls must be approved by the engineer and compacted to his specification, and care must be taken to prevent surface water ingress from above the wall. Additionally construction equipment of more 1.5 ton should be kept at least 2m away from the facing as if might push out the blocks. Loose compaction might result in significant downdrag forces on the geogrids due to internal fill settlement and increase tensile loads at the geogrid-block interface.

7. The type of foundation needed

Ultimately the design engineer will make that decision, especially for walls above 1,4m. Low retaining walls can often be built on a compacted gravel foundation. In some instances, even high walls can be built on gravel foundations, provided the walls are of the composite type (walls with geosynthetic reinforcing of the backfill). If the foundation has been specified as concrete, the first row of blocks should be set in mortar to key them in and to facilitate the levelling of blocks. If overall stability or bearing capcity is an issue the foundation soils can be improved with ground improvement methods such a piled rafts or stone columns.

8. The impact of the slope angle in SRW’s

• Construction: The angle at which the blocks are placed will drive the requirement for different block types or the rotation of the levelling pad.
• Cost: In general walls with shallower facing angles should be cheaper than vertical or near-vertical walls (SANS8006-1 states that the face angle of a wall is >70degrees, otherwise it classifies as a steep slope).
• Design and technical: The design pressures acting on the SRW facade decreases with a decreased face angle and therefore the local facing instability will not be as critical at shallower face angles. Additionally, the requirement for stronger geogrids will be necessary if the face angle of the wall is steeper.

9. What is the long-term structural integrity of the open versus closed block?

From a commercial developer’s or home owner’s point of view, they generally want open-face configuration walls, as they are generally cheaper to install up to +/-3.5m if designed correctly. From a purely civil engineering perspective, a solid closed-face wall offers better structural integrity and requires less maintenance, particularly where a highway design life must reach 120 years.

It should be noted that in some cases a combination of these can also cause acceptable unacceptable movement and collapse:
• Insufficient geotechnical subsurface and laboratory investigation,
• Insufficient construction mass – no or negligible design input.
• Saturated backfill – a lack of drainage above or behind the wall.
• Design angle and height exceedance during construction – a lack of supervision or poor planning.
• Settlement of backfill – substandard material, inadequate compaction/backfill erosion.
• Overdig – excavation close to wall foundations.
• Excessive loading – not accounted for in the original design.
• Limited bearing capacity – poor/saturated founding conditions or no foundation at all.
• Face connection failure – poor connection between blocks and geo-grid.
• Linear cracking of blocks – excessive lateral earth pressure or poor-quality blocks.
• Non-adherence of designer to codes of practice.
• Creep of geogrids with time.

All the factors above are to provide insight on how one can achieve and successfully install a segmental retaining wall. These come directly from expert industry players and as such it is best to follow their advice every step of the way.

Acknowledgement and thanks go to the following for the information contained in this article: Silvio Ferraris from Remacon, Holger Rust from Terraforce and Frans van der Merwe from GaGE Consulting.

How to achieve correct irrigation for a retaining...

Retaining walls all over