How to achieve correct irrigation for a retaining wall

Proper and functional irrigation systems are key to ensure that the aesthetics of the wall remains top notch, but there is another important consideration: The functional attributes of a correctly applied irrigation system, without which a retaining wall can actually fail, especially in large commercial installations. It goes without saying that everyone is after a lush, green and fresh planting system within the retaining walls, but key steps need to be taken to achieve this.

Silvio Ferraris, Pr Techni Eng. HNDT (Civil), from ReMaCon Products CC, a Gauteng based concrete retaining block manufacturer, highlights that it’s how the landscapers install the irrigation that is the real problem, not the actual watering spray action.

Top tips for installers and landscapers

1. Use at least a class 6 irrigation pipe and refrain from using class 3s, as they are too soft for commercial applications.
2. The landscaper needs to prevent too many pipe-to-pipe joints, but should rather opt for continuous lengths of pipe.
3. Use an irrigation system that has leak-proof jointing, whether it is pipe-to-pipe “T”-joints or sprayer joints.
4. When installing the system, the pipes and sprayers need to be placed as far behind the rear of the retaining wall blocks as possible. 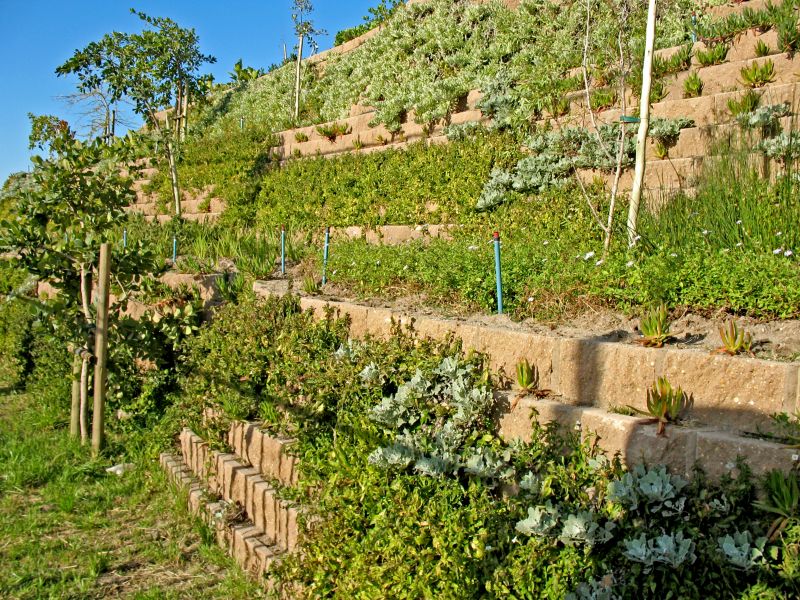 Shortly after planting and irrigation installation, some of the blue pipes can be spotted.

Sprayers can propel the water so that it cascades downward into the plant pockets. For high wall sections, pipes can be placed at intermediate height levels against the wall, with spraying again occurring top-down.

5. When it comes to junctions and control boxes, it’s best to place these into a sump; so if leaking occurs, the problem will be quickly detected by the runoff water on the surface.

Why?
By not following point 5, slow leaks will seep into the backfill, creating saturated conditions resulting in failures.

Take note
The system must be thoroughly tested! The irrigation system must be tested so that before the landscaper leaves the site, there is greater certainty that the risk of leakage is reduced.

6. Maintenance, especially in commercial developments, must be ongoing. The landlord needs to ensure that the landscape maintenance team often checks for leaks. 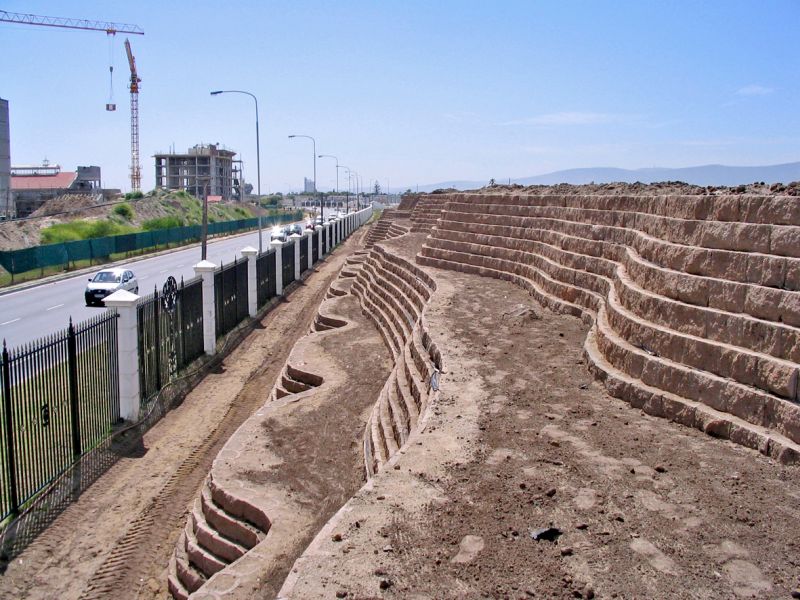 Oasis Wall unplanted before irrigation. The structure is laid out.

If you slack on maintenance, examples of sites have proven that there are potential failure problems up to five years after completion because of leaking irrigation joints.

A well planted and irrigated retaining wall not only offers structural safety, but also looks good. As noted above, a good irrigation system that functions according to the needs of the retaining wall requires numerous steps to ensure that the plant life survives and continues to flourish throughout the years. Yes, it has to look good, but never forget that it has a functional role to play. Together both these aspects need to be intertwined with each other and serve each other’s needs.

Let’s look at the Oasis Retirement Village near Cape Town, which is an excellent example of the tips above. It may go back several years – 2005 in fact – but it shows what a successful irrigation system can achieve and the number of years it can be successfully maintained. But what remains important with this project is the action steps taken, the irrigation approach, and why key decisions were made with regards to the systems used.

This project won the Concrete Manufacturers Association (CMA) Premier Award for retaining block walls, the Cathay Pigments Trophy. The judges were impressed with the lush vegetation softening the overall visual impact of the wall.

Take note
After several years, one major extension was implemented in the form of a double-sided, near-vertical noise barrier.

There is considerable growth of the established indigenous vegetation. The wall is well overgrown and the plants look healthy. Cape Irrigation Systems feels that this is largely due to a good irrigation system that was implemented at the end of 2005. The complete irrigation system was installed in three phases, following the construction programme:

1. The health care centre.
2. The screening berm along Ratanga Road.
3. Fully automated irrigation was installed on all three levels of the retaining wall to ensure sufficient coverage of all areas. 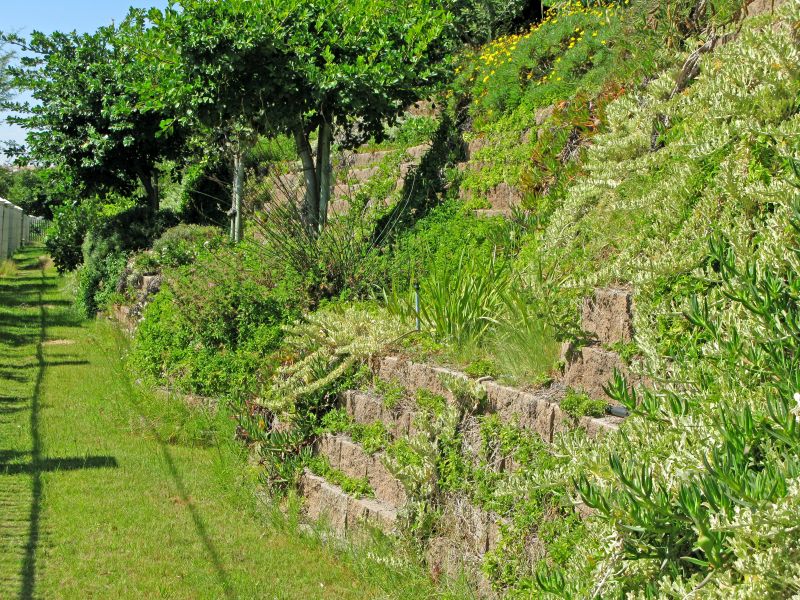 The wall is now fully covered. The wall is well overgrown and the plants look healthy.

What to consider during the design stage (specific to this project)
1. Prevailing winds, road traffic adjacent to the berm.
2. Accurate application of water to ensure that the soil does not become saturated due to overwatering.
3. Drip irrigation was a brief consideration, but due to fluctuations in effluent water supply quality, would be ranging from poor to extremely poor.
4. Due to the influence of maintenance of a drip irrigation system on a project of this nature, a conventional overhead “blanket type” irrigation design was decided on.

Why drip irrigation can prove problematic when used in conjunction with recycled water
Particles treated in effluent water can cause blockages as the flow path in the drippers is too small and when the system is shut down during the wet winter months, algae can grow and further compound the problem.

The “blanket type” overhead irrigation system chosen can easily reach all areas in the terraced type installation, such as this one, and would only be hard pressed on very high walls, where supplementary measures would have to be considered.

Technical details of the retirement centre
1. The irrigation on the berm consists of just over 200 static type shrub sprinklers with nozzles varying from 3m to 4,5m in radius.
2. A total of 30 gear-drive rotor sprinklers with a spray radius of 10m were also installed to stabilise the “back” of the retaining wall.
3. Approximately 700m of HDPE pipe was used for mainline reticulation and 1 300m of Class 6 LDPS piping was used for the sprinkler lines.
4. A Hunter ICC modular controller, dedicated to irrigation only, runs 18 Hunter PGV 25mm solenoid valves.

Although this just serves as one example of a very specific irrigation system, it quickly becomes clear how many factors come into play when aiming to ensure a successful result over several years. It all depends on the functional needs of the retaining wall, which in turn determines the aesthetic requirements and those of commercial buildings with very specific ideas in mind. An irrigation system can be complex, depending on the needs of the client, but it is important to remember what the end-result will be – a beautiful plantation that decorates a retaining wall forever.

Acknowledgement and thanks go to Terraforce, ReMaCon Products CC, the Concrete Manufacturers Association and Cape Irrigation Systems for the information contained in this article.

Main image: The system must be thoroughly tested! The irrigation system must be tested so that before the landscaper leaves the site, there is greater certainty that the risk of leakage is reduced.

How to plan and build a stable segmental...

Retaining walls all over