How green is your roof?

The question “How green is your roof?” can be answered in several ways, depending on a person’s understanding of exactly what a green roof is. For many, it is the roof of a building or home that is partially or completely covered with vegetation. These living roofs have increased in popularity across many cities, for the environmental benefits that they offer in addition to being aesthetically pleasing.

However, with a roof being such an extensive structural element of a building, architects and engineers in the green building sector have not stopped at vegetation, but rather exploited several ways in which a roof can serve a sustainable purpose. With the urgent need for buildings to reduce their carbon footprint and become carbon neutral (net zero), perhaps the better question to ask is: “How does your roof stand up against the net zero qualifications?” These qualifications can be categorised into ecology, energy, water and waste targets. Grahame Cruickshanks, managing executive for market engagement at the Green Building Council of South Africa, discusses four types of roofs that address these goals.

1. Living roofs
A rooftop covered with earth so that plants can grow on it, yields a surprisingly high number of benefits for the environment. So many, in fact, that Copenhagen (declared as the European Green Capital in 2014) has decided to make them obligatory, with the aim of getting CO₂-free emissions by 2025.

“These living roofs can be intensive or extensive, according to the type of vegetation and tending they involve,” explains Cruickshanks. “The intensive ones are like regular or vegetable gardens, needing greater care, while the extensive ones hardly need to be tended annually, though they are not usually used. In order to not affect the building structure, they need to have several layers, each performing a function – an anti-rooting layer, a draining one (letting water pass but not earth) and an impermeable and insulating layer preventing any harm to the building roof.”

The purpose of green roofs

Since green roofs absorb heat as opposed to attracting it, they contribute largely to the efficiency of buildings by reducing its temperature in the surrounding air. This is achieved by providing shade to the top of the building through evapotranspiration, meaning that the plants absorb water through their roots thereafter using surrounding heat from the air to evaporate the water.

A green roof can significantly reduce cooling costs by about 25%. They help to reduce the urban heat island effect, a condition in which urban environments absorb and trap heat, and, by lowering air-conditioning demand, decrease the production of associated air pollution and greenhouse gas emissions. “Green roofs are able to sequester carbon, given that it is the main component of plant matter and is naturally absorbed and stored by plant tissue,” says Cruickshanks. “A modelling study found that adding green roofs to 50% of the available surfaces in downtown Toronto would cool the entire city by 0,1 to 0,8°C.”

Nature’s way
Then there’s the role they play in water management, by reducing stormwater runoff. It has been found that green roofs can retain up to 75% of rainwater, gradually releasing it back into the atmosphere via condensation and transpiration, while retaining pollutants in the soil.

“In terms of ecological benefits, green roofs create a natural habitat as part of an urban wilderness, attracting beneficial insects, birds, bees and butterflies,” says Cruickshanks. “Biophilia is an important component of green interior design, with research pointing to the wellness benefits of employees being close to nature. Many Green Star rated buildings in South Africa include rooftop gardens where staff members can relax in a natural setting.”

Keeping in line with its focus on health and fitness, the roof of the bold new Discovery Head Office in Sandton features a 650-metre running track, which rises and falls as it winds its way through the garden, perched above a building situated in one of Johannesburg’s busiest business hubs. There are also yoga decks and multi-purpose courts on the roof. 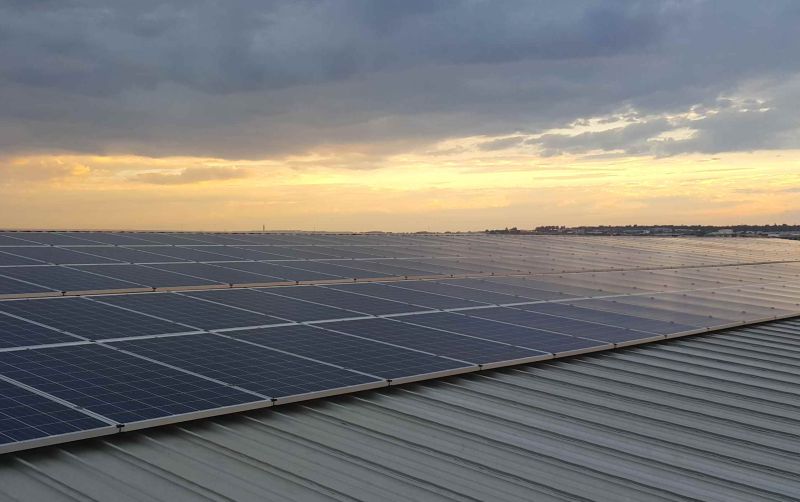 Solar panels can be mounted on many different types of roofs, with shingle roofs being the easiest to work with and tiled roofs slightly more challenging.

2. Rooftop PV
“With South Africa’s direct solar radiation levels being among the top three in the world, and with the climate receiving more than 2 500 hours of sunshine a year, it is little wonder that images of PV panels adorning roofs are more common than ever before,” emphasises Cruickshanks. “With rising electricity costs (and increased uncertainty in Eskom’s ability to deliver), the scales have been tipped in favour of making the initial cost investment for long-term gain. This is good news for the environment, given that solar power is a renewable source of energy and doesn’t cause any harmful emissions.”

Cruickshanks explains that solar panels can be mounted on many different types of roofs, with shingle roofs being the easiest to work with and tiled roofs slightly more challenging. PV solar panels are made up of a series of cells that convert sunlight directly into electricity. On a sunny day at noon, the total radiation reaching the land area can amount to roughly 1 kilowatt per square metre.

Creating a zero-rated building
The Vodafone Site Solution Innovation Centre (SSIC) at the Vodacom SA Midrand Campus, the first six-star Green Star SA accredited building in South Africa, features 292 photovoltaic panels delivering 230kWh of solar energy to power the building. This is double the requirements of the SSIC’s needs, and the balance is fed back into the Vodacom campus, creating a zero-rated energy building. 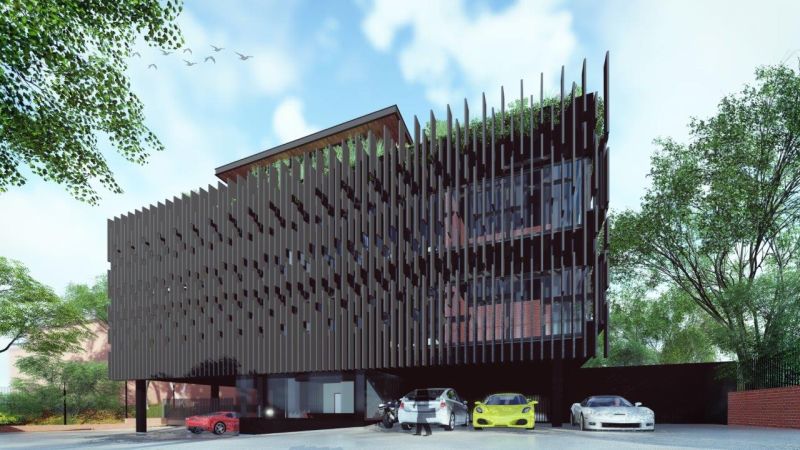 78 Corlett Drive, a recently completed six-star, net-zero carbon rating office space in Johannesburg, accommodates a 55kWp PV rooftop installation, which provides enough renewable energy for the building to meet its everyday needs. These buildings serve as inspiration for what making use of otherwise redundant roof space can accomplish.

3. Reflective roofs
“Reflective roofs are a relatively simple way to a more sustainable covering,” says Cruickshanks. “Painted in white or a variety of ‘cool’ colours, they work to mitigate the urban heat island effect. When sunlight hits a non-reflective roof, 38% heats the atmosphere, 52% heats the city air, 5% is reflected back towards space and 5% heats the building.”

This is compared to a reflective roof, where 10% heats the atmosphere, 8% the city air, 80% is reflected towards space and 2% heats the building.

4. Recycled roofs
According to Cruickshanks, roofing is not a one-size-fits-all purchase, but there are many durable, affordable and eco-friendly materials available to green your roof. From metal roofs, which are 100% recyclable and last up to 50 years, to shingles made from recycled content such as plastic, wood fibre and rubber; making a sustainable choice in material can make all the difference.

“Roofs account for one quarter of surfaces in cities,” Cruickshanks concludes. “With climate change and rising global temperatures an imminent threat, the reality is that our roofs simply aren’t green enough yet.”

Acknowledgement and thanks go to Grahame Cruickshanks, managing executive for market engagement at the Green Building Council of South Africa, for the information contained in this article.

7 product benefits that protect your investment

Feedback from our 2019 Johannesburg Roadshow