Before relocating informal settlers to new Integrated Residential Development Programme (IRDP) houses in the small Western Cape town of Botrivier, the Theewaterskloof Municipality contracted Dassenberg Retaining to provide a solution for storm-water management, access steps and erosion control between the construction levels at the housing site.
During construction, various levels were cut on the Botrivier housing site and services installed, which created exposed embankments with a high risk of erosion that would undermine the aprons around the houses. To stabilise these embankments, several 20m long Terraforce L12 retaining walls between 1m and 2m in height, with footing and subsurface drains in front and behind the walls, were required.

A number of 1m wide steps, featuring the Terraforce 4×4 Step block and L12 blocks as end stops, were installed to provide pedestrians with access between the levels. In addition, cut-off drains were added to some areas of the housing site, with Terracrete permeable pavers, to manage water run-off during the rainy season. The 1m Terracrete channels were placed on A2 filter material, and the blocks filled with excavated material. 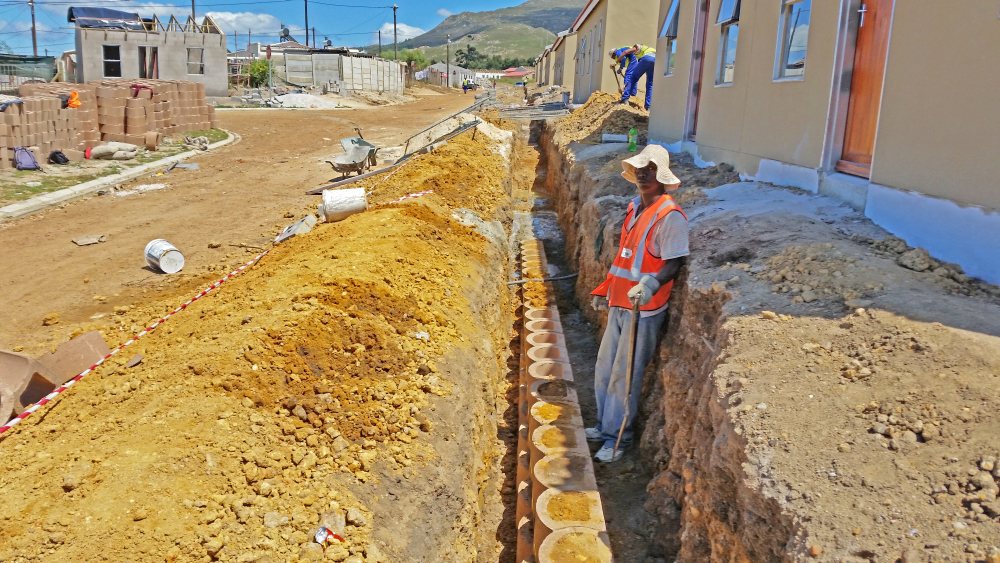 Terraforce L12 retaining walls between 1m and 2m in height were installed to stabilise embankments.

Energy-efficient blocks
What makes the retaining blocks used at the Botrivier site so popular, according to Georg Brand of Dassenberg Retaining, is that they represent one of the most energy-efficient segmental retaining wall systems in the industry, requiring low hardware input for manufacture, low transport costs and low inventory requirements at sales outlets.

“They are hollow yet strong enough, and require less concrete to do the job when compared to solid block systems, which of course saves money,” he states.

“Concrete retaining walls constructed using the Terraforce system are easily formed into complex curved shapes or into walls in which the upper and lower profiles are continuously changing, while the system also allows you a choice between round face (plant supportive) or flush face (smooth or split version) to suit specific requirements.

“Above all, they present a closed vertical surface structure that provides a maximum amount of soil mass within the wall, which prevents backfill spillage, while at the same time offering uninhibited permeability,” he adds.

For more information on retaining walls in the Cape region, contact Dassenberg Retaining.

Caption: Terraforce L12 retaining walls between 1m and 2m in height were installed to stabilise embankments.

Patterned public square based on an Albanian carpet

Exterior flooring and its role in creating a...