Africa’s governance performance worsened in 2019 for the first time in nearly a decade, due to a broad deterioration in the areas of human rights, security and rule of law. This is according to the Ibrahim Index of African Governance (IIAG) – the most comprehensive survey of its kind on the continent.

The report, which is produced every two years, is the most comprehensive assessment of governance in Africa. It is compiled by the Mo Ibrahim Foundation, which was founded in 2006 by a Sundanese-British telecommunications billionaire, Mo Ibrahim.

The report surveyed the 54-nation continent against criteria such as participation, rights and inclusion, security and rule of law, and human development.

The 2019 African average score for overall governance declined by -0,2 points from 2018, registering the first year-on-year score deterioration since 2010. 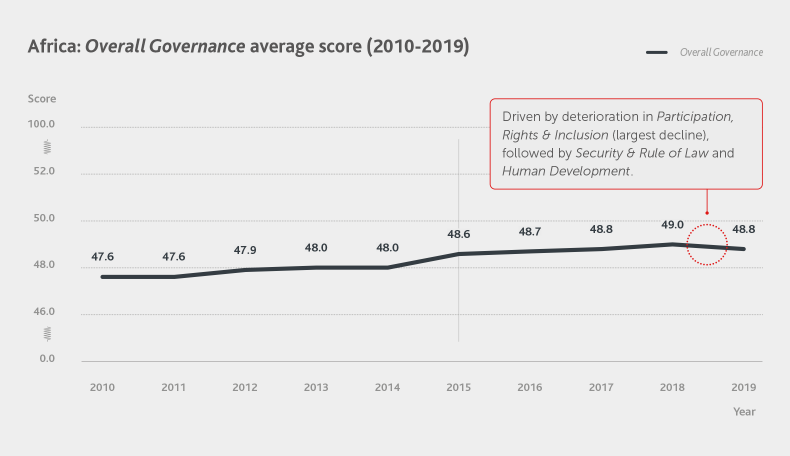 Citizens’ voices heard
Camilla Rocca, the head of research at the Mo Ibrahim Foundation, explains: “For more than two years we have been working on analysing and sanity checking the IIMF’s research parameters against relevance, and to ensure that it remains the most credible governance study for the African continent.”

Rocca leads the foundation’s research agenda and publications on African governance. She explained that in a drive to ensure its credibility, an Afro-barometer, in the form of a new indicator called the citizens’ voices aspect, was introduced as a first as part of the 2019 study.

As a result of this, while the first iterations of the IIAG were mainly focused on traditional public services such as security and education, the 2020 IIAG is now encompassing new areas such as environmental sustainability, digital rights, inequality mitigation and social protection.

Rocca notes: “Thanks to shared efforts and strong advocacy, relevant data on Africa has slowly become more robust and available from being concerningly scarce some ten years ago, resulting in a stronger IIAG.”

Key findings
The report aims to promote and improve governance and economic development in Africa. It has noted the following key findings:
• Mauritius maintained its top position in 2019.
• South Africa maintained its number six position.
• Somalia remained at the bottom because of security challenges in parts of the country posed by al-Shabaab militants.
• Progress achieved over the past decade was mainly driven by improvements in economic opportunities and human development.
• Unfortunately, this progress is threatened by an increasingly precarious security situation and concerning erosion in rights as well as civic and democratic space.
• Worrying declines were noted in the areas of areas of participation, rights and inclusion, security and rule of law.
• Top-performing countries included Mauritius, Cape Verde, the Seychelles and South Sudan.
• Pre-existing weaknesses may have been worsened by the Covid-19 pandemic.
• Consequently, gaps in African healthcare systems are triggering a major economic crisis, which has been highlighted by the pandemic. Food insecurity, instability and violence, including gender-based violence, are causing a further decline of the democratic environment. 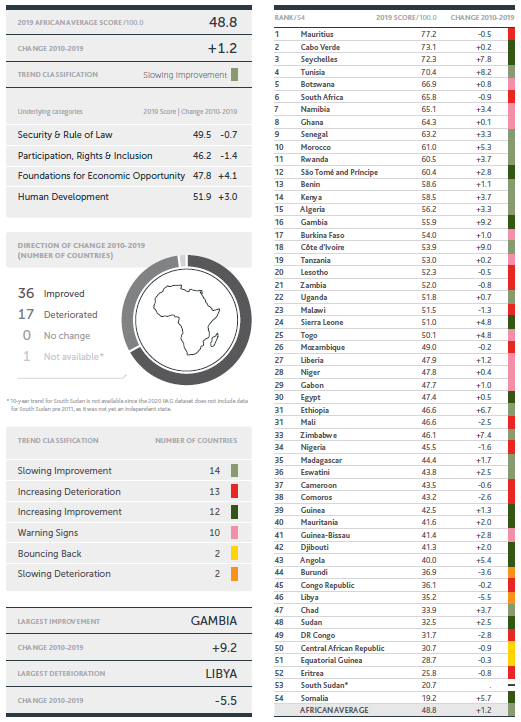 Diverging paths
The foundation defines governance as providing the political, social and economic public goods and services that every citizen has the right to expect from their state.

Over the last decade, governance dimensions have followed diverging paths. Against improved infrastructure, economic opportunities and human development, there is a decline in the rule of law and security.

Cause for concern
Some high-ranking countries, such as Mauritius, Botswana and South Africa – currently ranking 1st, 5th and 6th respectively – follow a concerning path of deterioration since 2015.

In contrast, some lower-ranking countries such as Gambia (16th), Ivory Coast (18th) and Zimbabwe (33rd), feature among the five largest improvers over the decade. Somalia, ranking 54th, is the 7th most improved country over the last ten years.

Besides a balanced approach to governance progress, the rule of law, justice, inclusion and equality appear to be the main common denominators among the best-performing countries.

“Somalia, which is at the bottom of the index, has shown signs of improvement over the last decade. Angola is among the best improved: 8th best improved over the decade and 3rd best improved since 2015,” she noted.

Majority of Africans dissatisfied with their government
In more than half of the countries surveyed, citizens are less satisfied with their country’s governance performance than ten years ago. For most countries, the deterioration in public perception of overall governance has even worsened since 2015. Since digital rights have also been infringed on and Internet shutdowns are on the rise in Africa, there has been a decline in information sharing.

“The analysis of our findings was that there was overall dissatisfaction among African citizens when it comes to governance delivery in their countries, and the level of satisfaction is worse than ten years ago,” said Rocca.

Citizens are the recipients of public leadership and governance. The assessment of governance performance needs to be rooted in results for citizens and cannot rely on official and expert assessment data alone, which is why the citizens’ voices and the new sub-categories become so important.

Covid-19 challenges
“In short, the pandemic has highlighted and exacerbated pre-existing weaknesses such as the gaps in Africa’s healthcare systems, declining of the democratic environment, food insecurity, as well as instability and violence, including gender-based violence,” she notes.

The foundation acknowledged that governments across Africa face unusual challenges because of the Covid-19 pandemic, which has affected their performance. However, the report shows that the continent has been going through a decline in security matters long before Covid-19, and the pandemic worsened an already alarming situation in terms of election interference, shrinking space for the civil society, increased repression and political unrest. Covid-19 also puts countries’ health gaps in the spotlight across the continent.

“The current Covid-19 pandemic is obviously worsening and threatening those that have been making progress, especially in the economic sector.”

While the first index reports mainly focused on traditional public services, such as security and education, the 2020 report now encompasses new areas such as healthcare affordability and inequalities. Additionally, it highlights issues of discrimination based on ethnicity, religion and sexual orientation.

Does it make for a fair assessment?
In recent years, African governments have accused the Mo Ibrahim Foundation of publishing only negative reports about their situation. However, the foundation says its findings are based on information gathered by several research groups. “It’s not an assessment entirely done by the foundation. We are just presenting a dashboard which is consolidating data that comes from 38 different sources, so it’s a collective assessment,” concludes Rocca.

Given that all 54 countries share the indicators, the IIMF sees it as a fair and impartial assessment.

For more information and the full report and data findings, visit https://mo.ibrahim.foundation/.

The evolution of healthcare in South Africa

Could localisation be a solution to pandemic-related supply...

Are local products up to scratch?

How Healthy is your Cash-Flow?