From lounge to skate bowl hangout

Inhouse Brand Architects has converted an unused lounge area of the Fresnaye residence into the ultimate urban man cave for the family’s teenage boy, complete with a fully functional concrete skate bowl.
The multifunctional design was developed around the lucky teen’s interest in skating, surfing and socialising. The project was steered by creative director, Aidan Hart, and associate director, Jenine Bruce, who chose a modern industrial aesthetic for this youthful interior.

To achieve the urban industrial feel, polished concrete flooring and industrial track lighting are installed throughout the space. Soft LEDs are embedded overhead in both the booth seating area and the timber wave, while steel cage pendant lights are suspended over the bar. 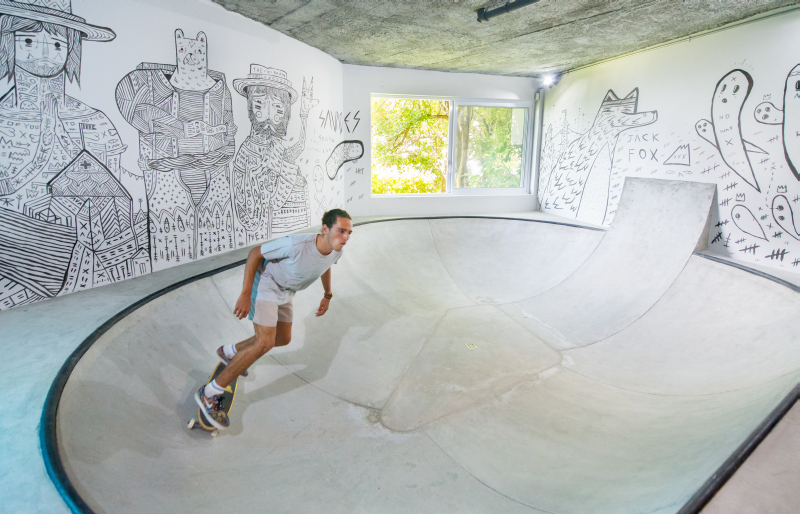 An entire floor level was removed in order to create the concrete skate bowl.

Concrete skate bowl
Initially, the bowl was supposed to be built in a stepped down recess, but it turned out that the structure would be too unstable to support the weight of the framework. Inhouse’s revised plan entailed removing an entire floor level, after which timber fins were crafted in the newfound space to create the frame, flexible plywood and polystyrene were incorporated to shape the backing, sand and rubble were used to fill the level that was taken out, and finally, cement was poured into the structure to solidify the bowl shape. 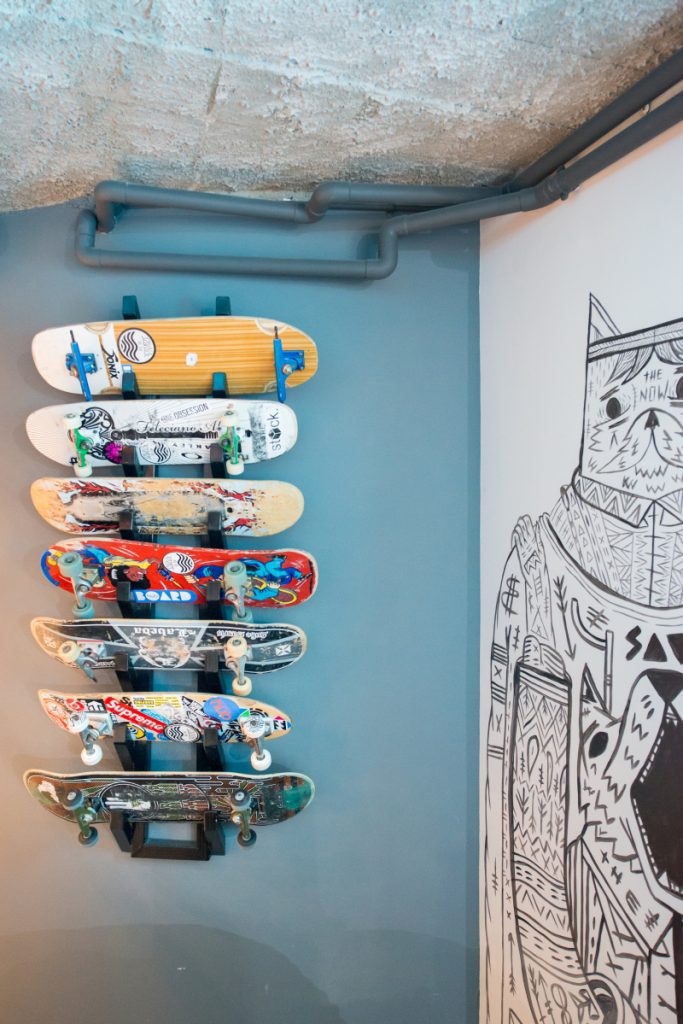 Ready to go – various skate boards are stacked against the wall.

Wall art
As a finishing touch, emerging South African street artist, Jack Fox, applied his signature illustrations to the walls surrounding the bowl. He worked without a set design and completed the impromptu artwork in a 12-hour, non-stop operation.

Curved timber wave
Another striking design feature is a grandiose, curved timber wave that cascades from the ceiling down to the floor to create a movie zone. The wave is crafted out of steel fins that are clad with timber and lit up with three LED strips. It is kitted out with surround sound to produce a genuine movie theatre experience.

Designed for chilling out
The bar, which measures four and a half metres, is fashioned from ground and polished concrete and clad with timber. Next to it, booth seating provides an inviting chill spot. A pool table, vintage Spiderman pinball machine, punch bag and pull-up bar round off the ultimate teenage boy’s dream pad.

Full thanks and acknowledgment are given to Inhouse Brand Architects for the information given to write this article.

Caption (Main picture): The curved timber wave that cascades from the ceiling down to the floor is kitted out with surround sound to produce a movie theatre experience.

Concrete Technology handbook to be edited

Choosing the right floor for industrial or retail

Transform your interior to a new level of...