While fire protection in a building is necessary to adhere to regulations, it is ultimately about ensuring the safety of building occupants and about preventing loss of life.
This is the main point that international fire protection expert, Marco Antonelli, emphasised when he addressed members of the Southern African Institute of Steel Construction (SAISC) in South Africa. Antonelli has more than three decades of experience in the fire protection industry and is currently Promat’s head of product management.

As part of the Etex Group ‘Marley Building Systems (PTY) LTD’ imports and supplies the complete Promat range of passive fire protection solutions including fire tested walls, ceilings and floors and penetration seals for all of these.
Marley Building Systems was proud to host Marco Antonelli in South Africa for a full week facilitating structural steel protection seminars around the country.

Fire behaviour
To protect against fire, one has to understand fire. The famous Christmas tree experiment, where a plastic tree is set alight in a small room, shows how a very small flame can spread rapidly in just one and a half minutes. In a mere 20 seconds, enough energy is released for the flames to engulf the entire tree and for the fire to start spreading to other close objects. The white smoke seen around the burning objects is water as the humidity goes out of all the combustible material. Once the gases that are extracted by the heat start to burn all together, it is called a flashover and from this moment on (at about one minute), the fire is out of control.

Antonelli notes that 30 years ago, the time before a flashover was between five and ten minutes. Today, the average is more or less three minutes, because there are more combustible materials inside smaller buildings. This means that if the fire is not extinguished within two or three minutes, it gets out of control and the building can only be saved through specified passive fire protection.

In order to give occupants a way to escape the building in an emergency, the escape route needs to be protected, normally through compartmentation using fire walls, partitioning, ceilings and structural protection. The latter is crucial, because if the building collapses, it doesn’t matter how good the compartmentation was – people can die and the building will be lost, with possible additional damage to surrounding buildings.

Structural protection for a certain time
To protect a building against fire, it should be designed to keep the fire load (the quantity of potential energy in a building than be released during a fire) as low as possible. One therefore has to determine the fire-resistant time of the loadbearing elements, to be sure that they will remain in place for all the duration of fire, which mainly depends on the fire load (and some other parameters).

Antonelli explains that, when a temperature of between 500°C and 600°C is reached, in 90% of cases steel loses more or less 50% of its loadbearing capacity and the building is no longer safe. Therefore the aim should be to keep the temperature of steel below that critical temperature by:
•    Limiting the fire load in the building. The less energy potential in the building, the cooler and less severe the fire.
•    Oversizing the structural elements so that the resistance is bigger, but this is can be expensive.
•    Using protective material around the steel to keep the temperature down. 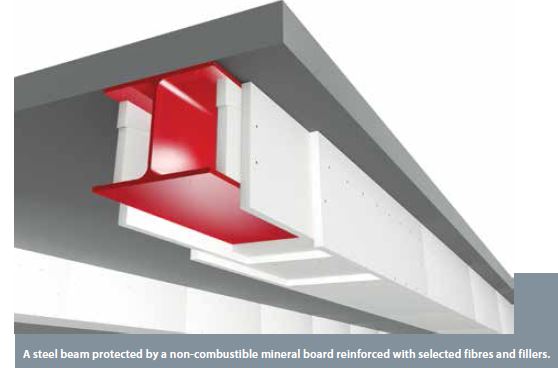 Structure analysis
In most countries, a prescriptive approach is followed for fire protection. Using this approach, to check if the loadbearing elements are performing, every single element needs to be checked one by one.

On the other hand, a performance approach is not grounded on regulation, but rather on calculations based on a specific scenario. In such a case, the specifier needs to create a hypothesis of the fire, take into consideration the whole building and understand the behaviour of the steel elements during fire. In general, a complex combination of the steel element performs better than a single element, resulting in less protection required. But, warns Antonelli, every connection can also be a weak point, because the moment the connection fails, the whole structure becomes weak.

Building fire example: Twin Towers
Antonelli uses the collapse of the Twin Towers in New York City as an example. “This building didn’t collapse because of the plane that flew into it, but because of the fire,” he says. “And, after the first 5 minutes, it was a normal cellulosic fire with a temperature of about 600°C or 700°C.”

According to Antonelli, two of the reasons why the building collapsed at a certain moment were:
1.    There was almost no compartmentation in the building. The building standards of the City of New York at that time stipulate that if a sprinkler system is installed, compartmentation is not necessary. That is why the fire quickly engulfed seven floors of the building.
2.    There were some weak points in the structure. The tower was built with perimeter columns – a cylinder within a cylinder – with concrete floors between the external and internal columns. The weak point for fire was the connection between the floor and the cylinder because of the deformation of the steel truss. At a certain moment, the force was too big and the floor detached from the column, resulting in the collapse.

Calculating protection: Mass factor
With regards to fire protection for steel, one of the most important considerations is the mass factor – the surface exposed to the fire, divided by the volume of every single steel element. The smaller the surface and the bigger is the volume, the longer the steel takes to heat up. 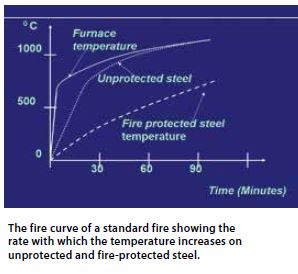 The tricky part of this calculation, as Antonelli points out, is that the thermal conductivity (lambda value) of the protective material during fire is unknown. It is a big mistake to use the thermal conductivity of the protective material at 20°C or the lambda value from a different calculation or a different standard. “Sometimes there is the temptation to use the most favourable one, but you cannot choose what you like, you must use what you need,” he warns. “A mistake could be fatal and is inexcusable.”

Another possible unknown factor can be the thickness of the protective material, because if it is an intumescent paint, the thickness constantly changes during a fire and is therefore not accurately predictable.

According to the Eurocode, the only way to accurately calculate the lambda value during nominal fire exposure is through testing according to EN13381-4/8.

Fire test standards
Fire tests are a critical component in the process of designing a fire-safe environment because the only way to understand the behaviour of the material is to test it for its intended use. The more precise the standard, the better one can evaluate the real condition and determine the material needed.

“What I have seen, is that the European (EN) standard is becoming more and more popular outside of Europe because the results are safer and closer to reality. It is more complicated and, sometimes, more expensive, but safety comes first,” Antonelli states.

Calculating protection: Critical temperature
Another important factor in determining the necessary protection is the critical temperature of steel, defined as the temperature at which the material loses much of its strength and can no longer support the design load or actions. It is based on the ratio between the loadbearing capacity of the element and the action (kind of load) during fire. The result of the calculation is a number between zero and one. 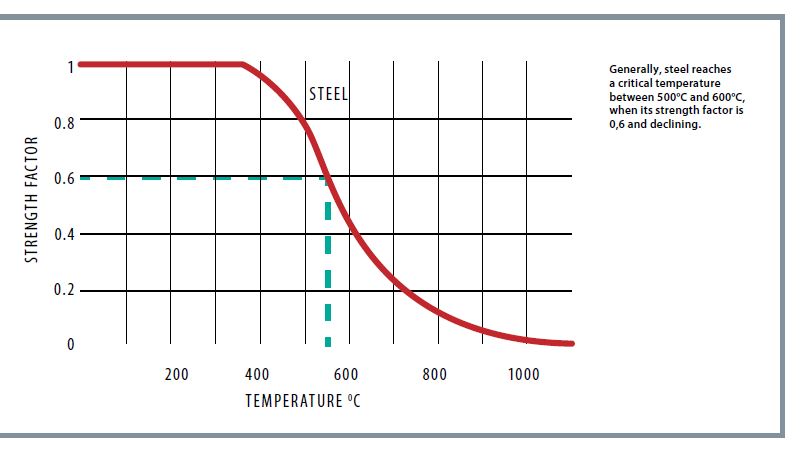 How to save
Antonelli stresses the importance of precise calculations, not just to ensure adequate protection, but to enable savings. “During design, if calculations are done correctly, there is always a perfect balance between the minimum acceptable level of protection and the maximum level of steel reduction, resulting in possible cost savings,” he says. 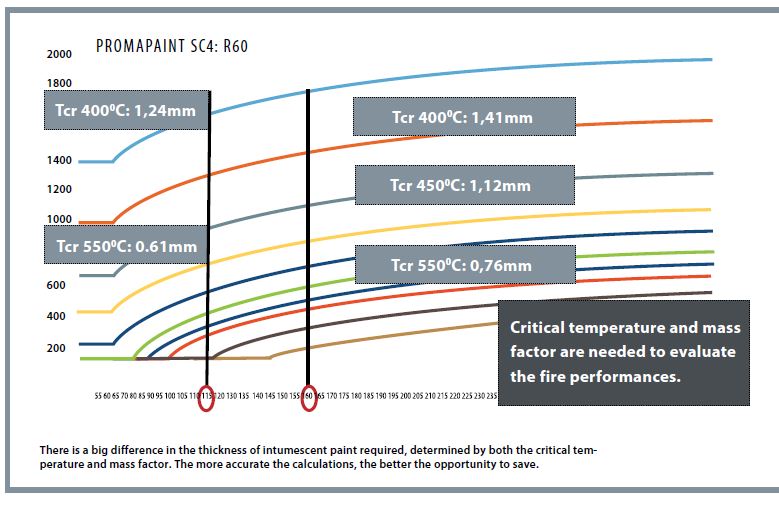 Also by using a bigger steel element, decreasing the mass factor from 160 to 115, between 15% and 20% less material is required.

“So the more precise the calculations, the bigger the opportunity to save money,” emphasises Antonelli. “This is how to find the right balance between safety and the most efficient system – it works at the minimum investment.”

•    Intumescent paint
Developed in 1963 to protect the Apollo capsule, intumescent paint is easily applied to any steel structure and with ranging thicknesses, and offers varying protection times. When the temperature rises, a chemical reaction between the active components causes expansion which creates an insulating foam-like coating, which protects the steel by slowing the rise to its critical temperature. It can also be used on concrete and timber.

•    Board
It has constant thickness and it doesn’t need any surface preparation. Because of the mass factor of the boxed shape of board protection, it performs better than the same element that it protected with paint because the surface exposed to fire is much lower. However, it weighs much more, is expensive and is not suitable for protecting complex geometry.

Don’t take shortcuts
Fire is complex and fire protection is complicated. Henry Louis Mencken has put it wisely when he said: “For every complex problem there is a solution that is clear, simple and . . . wrong.”

“The reality is that there are no simple solutions. One has to accept that it is complex and it is up to us to find the best solution,” Antonelli concludes.

Full thanks and acknowledgement are given to Marco Antonelli, Promat and Marley Building Systems for the information given to write this article.

What built environment professionals should know about copyright law

Architectural aluminium added to the mix

Educating the client beyond aesthetics

How to select the best material for office...

Women at the forefront of architecture

Opinion: Why the construction and civil engineering industry...