At the 2019 Green Building Council of South Africa’s annual conference in Cape Town, CEO of Marc Sherratt Sustainability Architects (MSSA) gave a presentation on a unique project that aims to show how green building practices can be extended to homes in informal settlements. The project is a critique on current green building dogma, which is focused mainly on the wealthy.

In June 2019, MSSA entered into a pro bono agreement with Rays of Hope, an organisation that focuses on education, orphaned and vulnerable children and work readiness in Alexandra, Johannesburg. MSSA’s brief was to design a house for a family of four for a local Alex resident that Rays of Hope had identified. The budget for the home is R500 000.

About Alexandra
Alexandra, which borders on Sandton, remains a place of poor infrastructural development with many top-down urban renewal plans failing. It was known as the “dark city” during apartheid because of no electricity provision. Today, services are still inadequate or faulty, spurring a new wave of civil protests.

Fire House goal
“Our goal with Fire House is to create a housing unit to international quality and sustainability standards at a price that is affordable for the setting. Though building cost is crucial to implementation, it is secondary to green building design innovation, which is sorely needed in our country’s informal settlements,” says Marc.

MSSA believes that in the African context, if issues such as employment, education, housing and healthcare are not simultaneously addressed, ecological pollution and climate change emissions will remain a sub priority.

Can “matchbox homes” be green?
“The majority of the GBCSA’s Green Star Rated buildings are commercial office buildings, with most of Sandton’s buildings having a Green Star Rating. Residential buildings have been slow to transform because it is an expensive transition, with social housing being the most neglected in terms of green innovation,” declares Marc.

While it is easy to see the business case for designing and developing buildings of scale, the green building progress that the commercial, and to an extent residential markets have seen, has not been extended to houses that the majority of South Africa’s population can afford.

“If Africans don’t set a precedent for green building that starts from the bottom up, we are not going to see the necessary scale of green building solutions in our cities in the next 20 years. As a sustainability firm, we felt convicted that we had to try to address the architectural challenges in informal settlements,” adds Marc.

The fire challenge
Through interview processes with community members, which were facilitated by Rays of Hope, the design team learned that fire is a major challenge for residents of Alexandra. Shacks are often built out of timber and corrugated iron, and with people cooking with paraffin, illegal electrical connections, combined with many people being away from their homes during the day, structures easily catch fire. 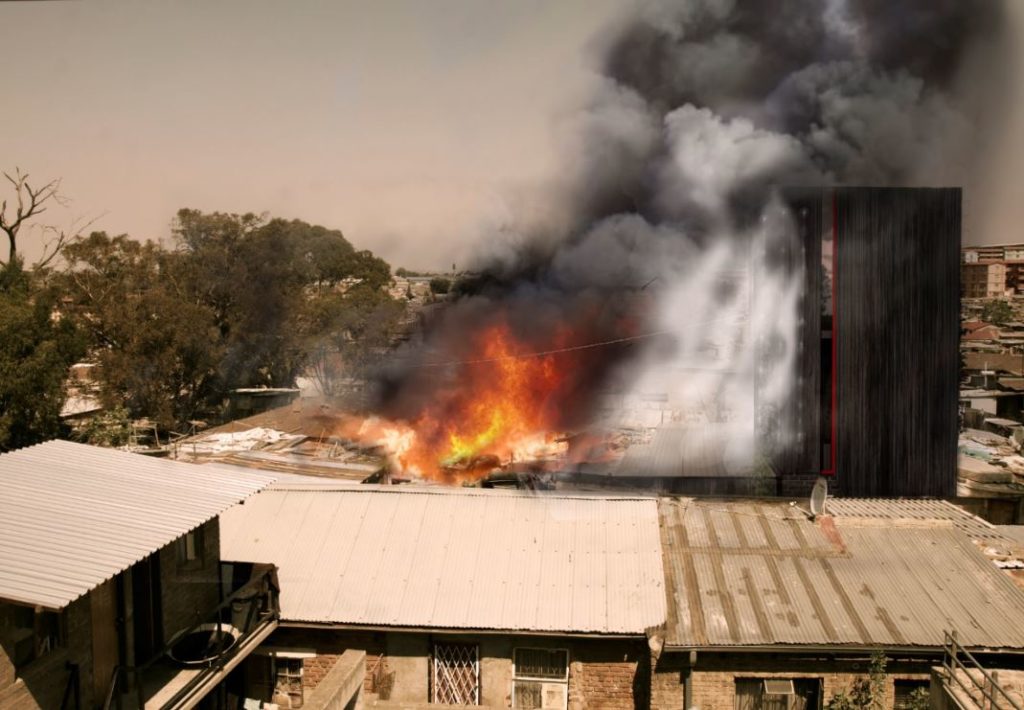 “When a fire starts, there is very little that can be done to stop it from completely decimating a house or even an entire area. Further exacerbating the problem is the poor water infrastructure, lack of fire fighting equipment and space for fire trucks to move between the shacks doesn’t exist. When asked about the scariest thing they could face, many of the residents said it would be fire,” says Marc.

Creating a municipally self-sufficient, net positive building
The unit that MSSA set out to design had to have a prototypical, prefabricated component and a component to express individual family identity. It also had to be ecologically sensitive and seek to replenish extinct indigenous biodiversity through landscaping and other means. The result is a municipally self-sufficient unit that will be certified at least as a net positive carbon building upon completion, with the team investigating the feasibility of net positive waste, water and ecology.

Materiality
The materials that were chosen for Fire House conform to the Living Building Challenge’s list of safe materials. A prerequisite was that the materials needed to be prefabricated and installed on site by a mobile crane due to the narrow streets in Alexandra, which make traditional construction methods difficult.

“While the government’s RDP programme did a great job producing a large quantity of homes, the critique on the programme is that the site is wiped clean to create many “matchbox-type” single storey houses that have encouraged urban sprawl. Our approach with Fire House was to start with the existing urban grain and build upwards instead of demolishing the site and starting from scratch,” says Marc.

To accommodate the existing footprint of the house, MSSA wanted a light material that could simply be clipped onto the existing.

FSC certified Cross Laminate Timber (CLT) was chosen as it is not only sustainable but can be laser cut to size, limiting waste and water use. The CLT clips onto the existing brickwork footprint and the unit will then be clad with a thick fire resistant “bark” of hempcrete and corrugated iron. Glass is kept to a minimum to prevent heat loss while still providing adequate daylight. Hot air is extracted via a skylight.

Electricity will be provided by a 25m² solar system and 5kWH lithium ion batteries, water heating is by heat pump and there will be a gas stove for cooking. Rainwater will be collected and stored underground for use in irrigation, washing and toilet flushing. Fire protection will be achieved via a mist irrigation system that duly irrigates the surrounding landscape.

An added benefit of the prefabricated design is that it can be constructed quickly.

“Johannesburg’s population is growing at three people per hour. We can’t design the homes that are needed fast enough with traditional building methods. The prefabricated approach enables us to erect a home quickly while keeping the quality high,” says Marc.

MSSA would eventually want to run the project on a bigger scale with a digitised design process that enables residents to enter their dimensions into an “app-type” service that allows quick manufacture. Completed houses will be delivered by truck and simply crane-dropped onto their existing homes.

Creating micro business opportunities
The site location is close to Nelson Mandela’s house and the Alexandra museum, with many tourists moving about the area. During community consultations, ideas regarding what Fire House could become were explored.

“The residents expressed a need for Wi-Fi. There’s potential for the unit to become an internet café where tourists can have lunch. The plants that have been chosen are endemic to Johannesburg and release sweet smells that aid in disguising the smell of sewage, which is common in informal settlements. There will also be indigenous fruit trees that produce fruit high in vitamin C content that can be repurposed as syrup or brandy, which the residents can sell. With Fire House, we’re showcasing our “forgotten” indigenous knowledge as African’s, we were sustainable before colonialism and we can be sustainable again after it. Importantly let’s bring this knowledge and innovation home to the most vulnerable, we’re inviting residents to be proud of their natural landscape, and find like we have when you heal the planet, you heal yourself.” concludes Marc.

Full thanks and acknowledgement are given to Marc Sherratt, Sustainability Architects (MSSA) www.marcsheratt.com for some of the information contained in this article.

The benefits of concrete roof tiles

Rooftop gardens: A way to turn down the...

Transform your interior to a new level of...

Helping you determine sustainability in flooring

Greening the construction and décor industries