The government was recently encouraged by cement industry players who want a level playing field to foster industrialisation in the cement sector, at AfriSam’s Annual National Budget Breakfast in Sandton on 28 February. Rob Wessels, chief executive officer of AfriSam, emphasised that the need for fair competition in the industry is becoming increasingly important, following Finance Minister Tito Mboweni’s budget speech on 26 February.

Wessels said the industry has been engaging the government and trade authorities to ensure there are fair conditions over the import of cement, including the enforcement of existing port tariffs for these goods. This comes after Minister Mboweni committed the government in the budget speech to redirect spending towards infrastructure and away from public sector wages.

“South Africa is de-industrialising its economy and as committed corporate citizens, we are up to the social challenges and want to keep our industry thriving as an engine for upliftment. However, the recent imposition of carbon tax in South Africa means a further cost added to local producers, which many importers do not face,” he said.

Richard Tomes, sales and marketing executive at AfriSam, noted that cement imports were rising and were having a negative impact on job creation in the country. He said AfriSam had removed inefficient capacity and had right-sized to cope with the current challenging environment, but unless there is an upturn in demand soon, they may have to revisit cost-saving initiatives. 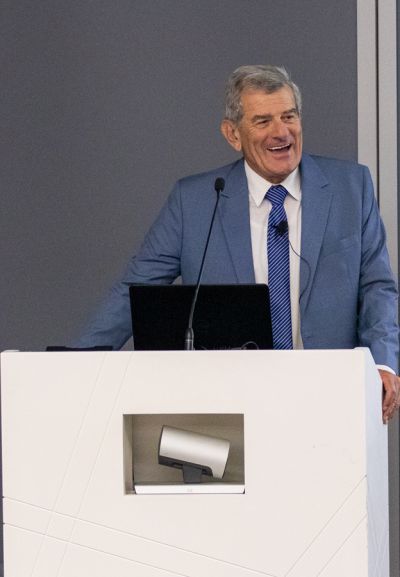 Also at the breakfast, Dr Azar Jammine, chief economist at Econometrix, warned that signs for any recovery in the construction sector this year were not good, with the International Monetary Fund (IMF) predicting a growth rate of only 0,8% for the local economy. This was even before the impact of the coronavirus outbreak was factored into this estimate.

According to Dr Jammine, the outlook for the building industry in the coming year looks bleak with building completion statistics, especially for flats and townhouses, declining sharply. He said the sector lost about 131 000 jobs in 2019, representing 8,8% of the workforce, which is the most jobs lost by any sector in the economy.

“The cement industry has been one of worst-hit sectors during the downturn, with sales falling by about 5% over the past year. The fate of the economy relies on President Cyril Ramaphosa’s ability to implement plans announced by Minister Mboweni, to push reforms to attract investors and to make government spending more efficient,” he said.

5 Reasons why quartz flooring is here to stay

The need for a safe return to the...

Solid sales despite the global Pandemic

Teeing off for a good cause