The front facade of Seminole Hard Rock Hotel & Casino in Hollywood is both a media system and a dynamic sculpture that stands about 120m tall – a first in the hospitality industry around the world. The building is lined with 16 800 video fixtures using high-performance LEDs, called V-Sticks, which create a screen for daily musical showcases.

With the aim to bring Hard Rock Hotel to life through a creative digital presence, Design Communications Ltd (DCL), an architectural specialty firm that focuses on integrated digital media, custom signage, wayfinding and themed entertainment, collaborated with Float4, a creative agency specialising in the integration of digital experiences into physical space, to create a light spectacle for the grand opening of the guitar-shaped hotel.

The creative team also developed integrative generative and sound-reactive content for two other shows that pays testament to how music has been instrumental in defining the legacy of Hard Rock Hotels, restaurants and entertainment properties around the world. The shows will run from sundown to sunrise every night. 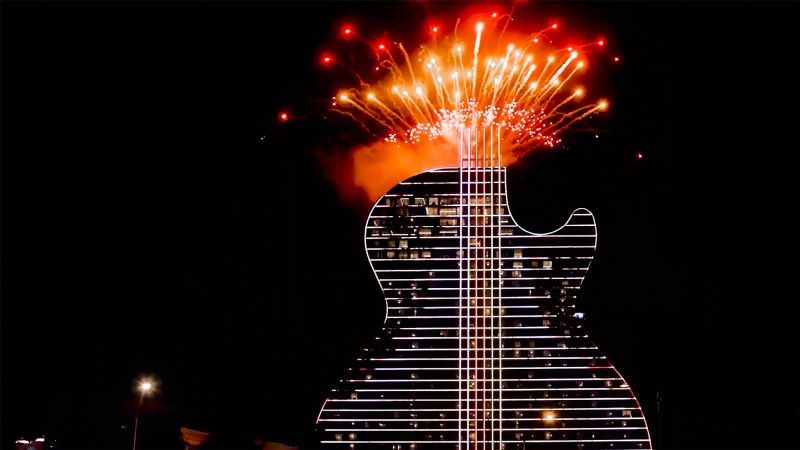 Using a parsing script, the mapping of the V-Stick components was converted into usable data strings so that the team could choreograph content that corresponded to the building’s existing technical infrastructure. Courtesy of DCL

The design behind the show
During a show, each of the 16 800 V-Sticks light up with different colours, speeds and patterns of directions, depending on the content sequence. A 3D CAD model of the hotel was created to pixel map each individual V-Stick, including its position on the building, the direction it was facing and its signal flow.

All the content is managed on a single 4 Karat RealMotion media server, and the team needed to create a lookup table that the server could use to sample content from the model and output to the building itself.

Using a parsing script written by Float4’s software developer, those components, which amounted to about 2 million pieces of data, were converted into usable data strings, so that the team could choreograph content that corresponded to the building’s existing technical infrastructure. Converting the data one by one would have taken about four years to finish. 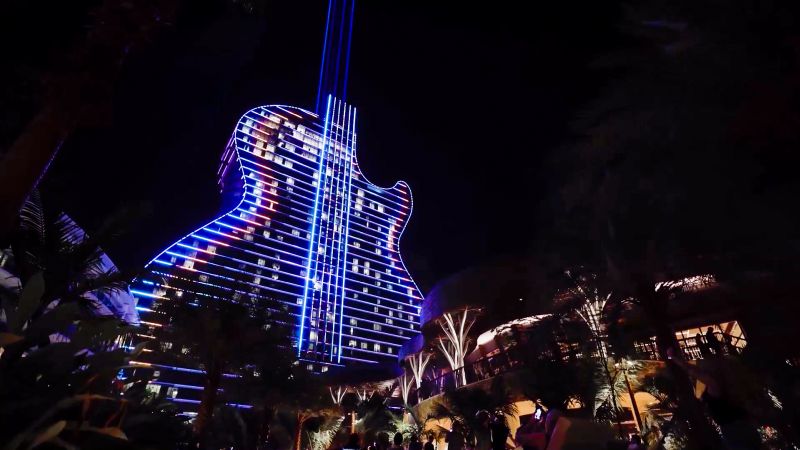 During a show, each V-Stick will light up with different colours, speeds, patterns or directions, depending on the content sequence. Courtesy of DCL

Creating a moment
“Before a show, we have a moment where the installation is in a dormant state; the lights are ambient, fluid,” says Antoine Saint-Maur, multimedia director at Float4.

“At that moment, we want guests to be able to congregate in anticipation, collectively anticipating the start of the show. When in Las Vegas, people make their way over to the Bellagio Fountain Show and there’s this brief period where time stands still in eagerness as everyone gathers for this one monumental experience. That’s the feeling we want to create with the shows; we want to create a moment for Hard Rock guests and fans to come together and watch a daily celebration,” he states.

Thanks and acknowledgement are given to Float4, DCL Communications and Hard Rock for the information and images provided.

The benefits of sintered stone

JEREMY’S Q&A – How should seamless stone flooring be cleaned?