Public transportation centres are increasingly becoming spaces for innovation in design. This is transforming architecture, with efficiency, automation, traffic flow and environmental factors driving the development of these hubs. From airports to train stations, architects and engineers are creating amazing structures and interiors that facilitate the rapid growth and evolution of the transportation industry.

Jewel Changi Airport, Singapore
Jewel Changi Airport in Singapore recently developed the former open-air car park in front of Terminal 1 at the airport, to establish a new paradigm in community-centric airport design. Safdie Architects led the design to expand the terminal’s arrival hall and baggage claim areas, to create a plaza combining airport operations, a marketplace, expansive indoor gardens, a hotel, leisure facilities and more than 300 retail and dining amenities at a cost of $1,7 billion.

The airport covers a total gross floor area of 135 700- m², spanning ten storeys, five above-ground and five basement levels, serving as the heart and soul of the airport and maintaining the airport as a major aviation hub in the Asia-Pacific. It forms part of a long-term plan to double the airport’s capacity by the mid-2020s, with the new handling capacity expected to increase from 21 to 24 million passengers a year. 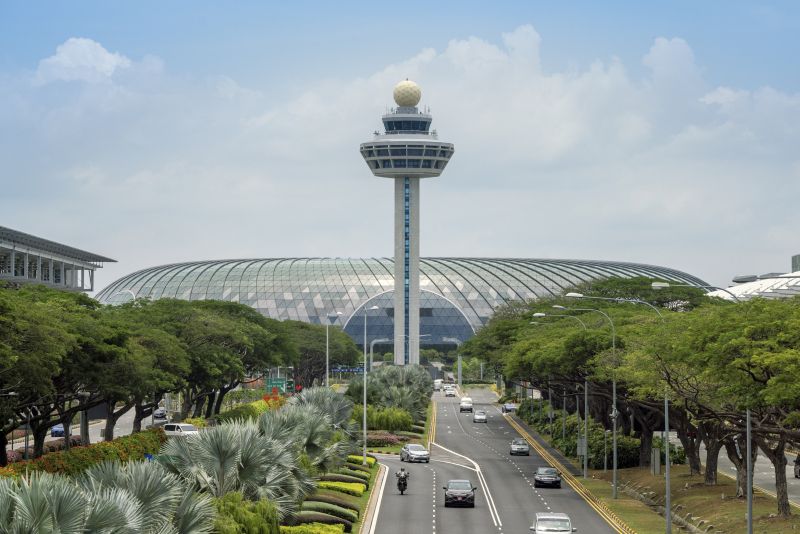 Tallest indoor waterfall delights
The centrepiece of the airport is the Rain Vortex, the world’s tallest indoor waterfall at 40m in height, surrounded by a terraced forest setting. Attractions include the Shiseido Forest Valley, an indoor garden spanning five storeys and Canopy Park at the topmost level, featuring garden and leisure facilities.

The building is a torus shape which is accommodating the need for multiple connections in the airport. It has a glass-and-steel roof structure, spanning more than 200m at its widest point with only intermittent supports, resulting in a near column-free interior. The roof has 9 000 pieces of custom cut double-glazed facade panels and 2 750 metal panels, with a sloped oculus, serving as the mouth of the waterfall, at the centre. 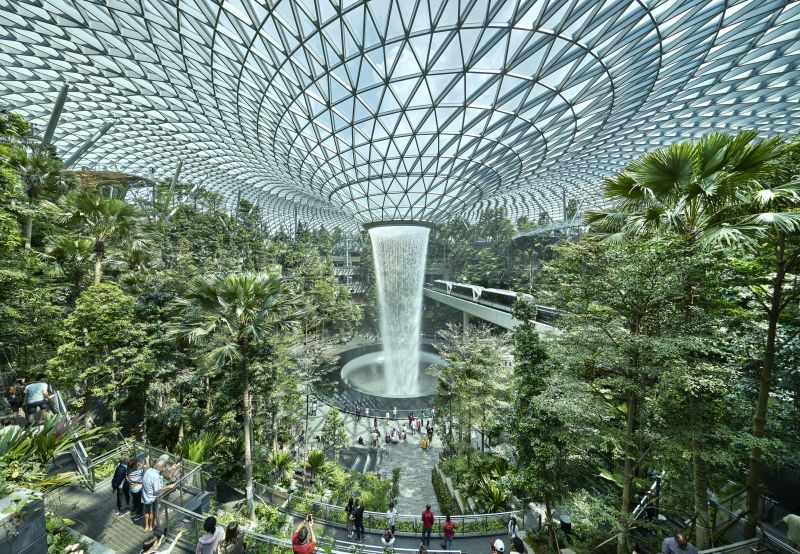 Animated water show at night
Rainwater flows along the glass roof and through a controlled opening at the roof top oculus, freefalling down through the multi-storey garden to a collection basin at the base of the vortex. It contains a 435 000-litre reservoir, creating dramatic visual effects, daily rainbows and a cooling micro-climate effect. An acrylic funnel at the bottom prevents splashing and insulates the sound of the cascade; and water flows have been carefully tuned to minimise splash and noise.

The Jewel Changi Airport Skytrain which connects the terminals passes above ground near the waterfall, allowing passengers remaining airside to see the Rain Vortex and airport itself. At night, animated content is projected 360 degrees around the cylinder of water in a one-of-a-kind sound and light projection show, with the glowing beautiful dome roof visible from all surrounding areas. 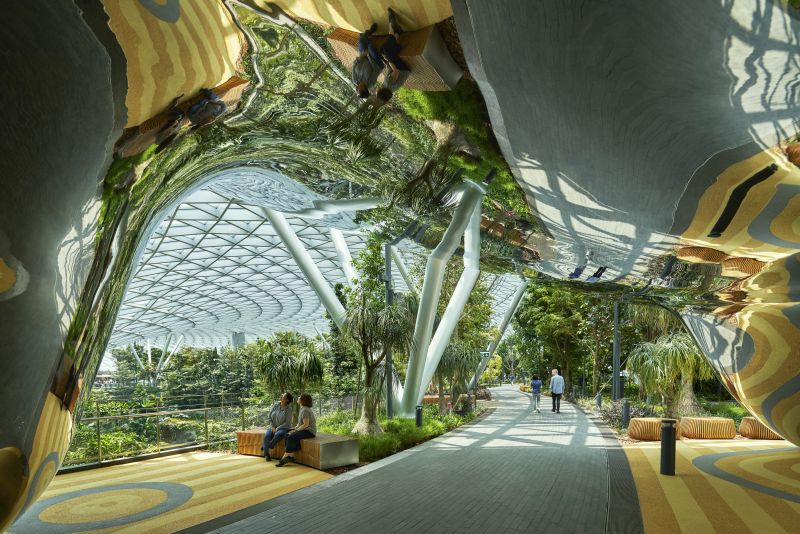 Balancing opposing needs
There are four different gateway gardens, with unique landscape elements leading to Terminals 1, 2 and 3. The upper levels are hosting multiple attractions including a glass-bottom bridge, net walks, hedge and mirror mazes, a slide for all ages and a topiary garden. Adjacent to and accessible from the garden are retail shops, food and beverage outlets, an IMAX movie complex, a transit hotel, a grocery store, early check-in facilities, baggage and concierge services.

The key to success with this development was to balance the multitude of interests and functional needs, which were often opposing each other – for example, where the needs of people and a retail marketplace are at odds with a large garden. 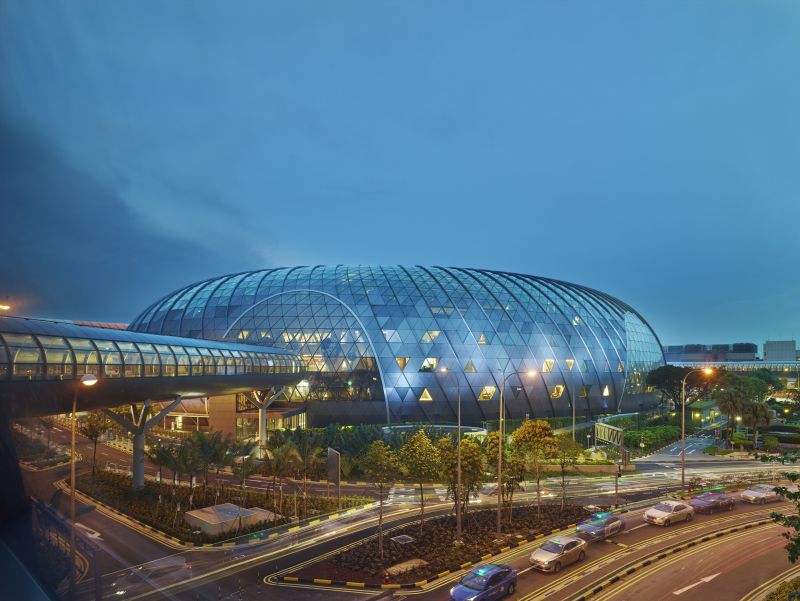 This airport facility is a place of community, accessible to all in-transit passengers and the public, creating a place where locals and tourists interact. This makes it uniquely different; interweaving people, nature, culture, commerce and recreation to provide an uplifting experience.

Rail Baltic Ulemiste Terminal, Estonia
Zaha Hadid Architects and Esplan have begun designing the new Ulemiste Terminal, the starting point for the planned Rail Baltic line connecting Estonia with Finland, Latvia, Lithuania and Poland, after winning a joint tender for the design at the end of 2019. The terminal will be designed at a cost of €2,6 million and is expected to be completed by 2026. 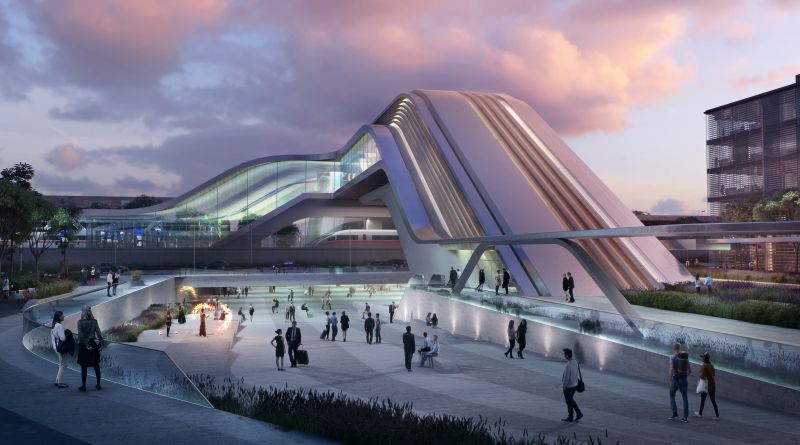 Connecting Baltic states
Ulemiste Terminal will be designed as a connecting public bridge used by the local community and as a multi-modal transport hub for commuters, national and international rail passengers, as well as air travellers using the adjacent Tallinn Airport. The architects are aiming to create a bustling, multi-faceted transport hub and a new landmark in urban space that integrates commercial premises, public services and architectural solutions.

The 870km European standard, 1 435mm gauge, electrified double-track railway is for passenger and freight transport from Tallinn, Estonia, to the Lithuanian-Polish border. It will enable passengers to travel from Tallinn to Parnu in 40 minutes and from Tallinn to Riga in two hours. 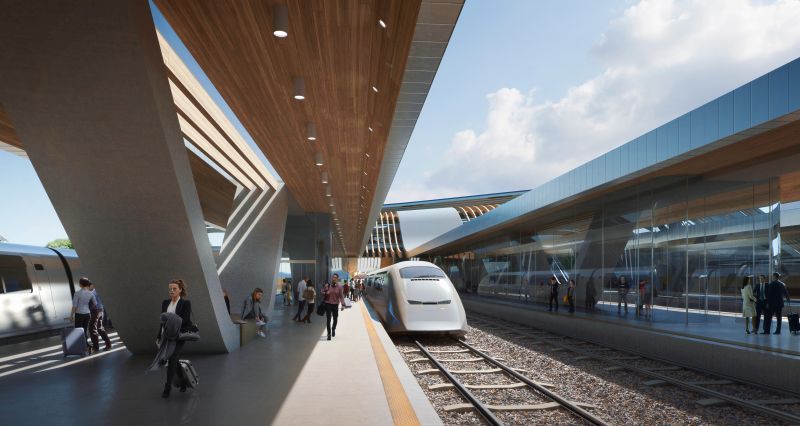 Guided by movement
The focus of the building, which will be a dynamic, open environment with a great deal of light, will be guided by people’s movements, smooth traffic flows and connections. Circulation routes through the building have determined the station’s spatial geometry, to aid navigation and the smooth integration of bus, tram and rail lines that intersect at the terminal. 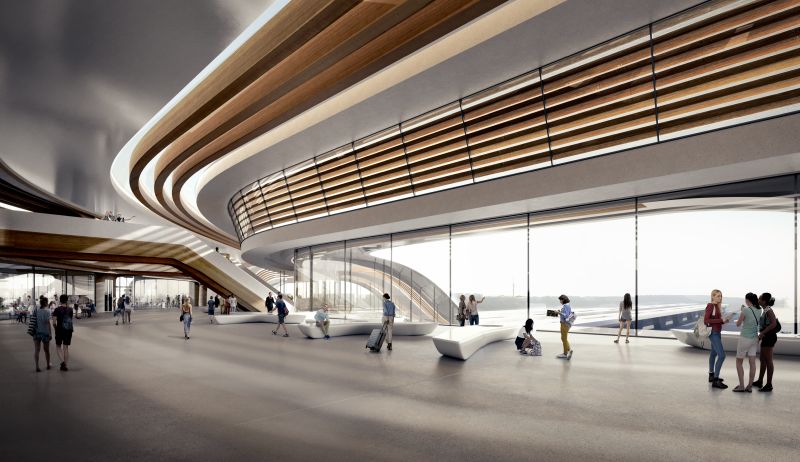 Eye-catching landmark a gift
The most challenging aspect of the project will be the construction of the main level of the terminal across the existing railway line. A modular structural system needs to be developed in phases to enable ongoing operations of the rail lines throughout construction. The design of Ulemiste Terminal will be an eye-catching architectural landmark that is well thought out and a gift to the surrounding area, ensuring Estonia has a new and evolving transport hub.

“We are excited to start with the design of such a strategically important site for Estonia. It will be an innovative transport hub that looks to the future and places high value on the passenger experience. The new terminal and the public space we’re designing around it will also breathe new life into an historical part of the city,” says Gianluca Racana, chief executive officer at Zaha Hadid Architects.

Kuwait Airport Terminal
A new terminal for Kuwait International Airport is being designed by Foster + Partners, transforming the airport into a regional air hub in the Gulf. The project includes a new passenger terminal, a third runway, and the expansion and renovation of two existing runways and other facilities, expected to be completed by 2022. 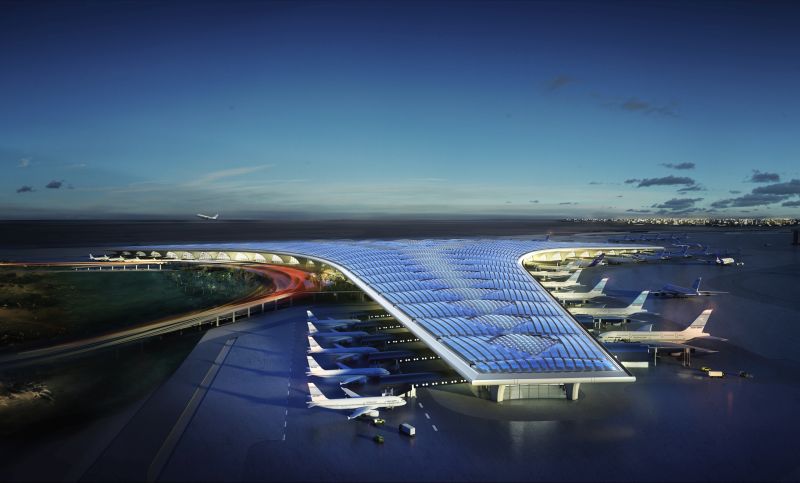 Increasing passenger capacity
The trefoil plan of the terminal features three symmetrical wings of departure gates, with each facade spanning 1,2km and all extending from a dramatic 25m-high central space.

The building is planned with a single roof canopy, with glazed openings that will filter daylight and deflect direct solar radiation. The canopy will be extended to the entrance plaza and supported by tapering concrete columns that feature organic forms, which were inspired by the contrast between the solidity of the stone and the movement of Kuwait’s traditional dhow sailing boats. 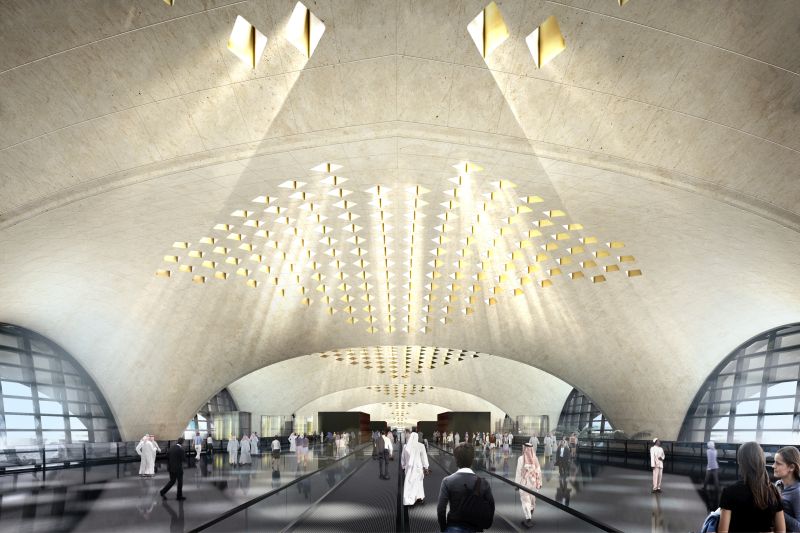 Highest level of comfort
The building is characterised not only by its size, but also by the complexity of its roof structure. The interaction between the various components is complex, so any change in stiffness of an element has a significant influence on the static load of the other components.

The terminal is designed to provide the highest level of passenger comfort, with measures being taken to minimise the walking distance from the centre of the terminal to the endpoints. The interiors of the terminal are designed for simplicity and ease of use, with a few level changes. 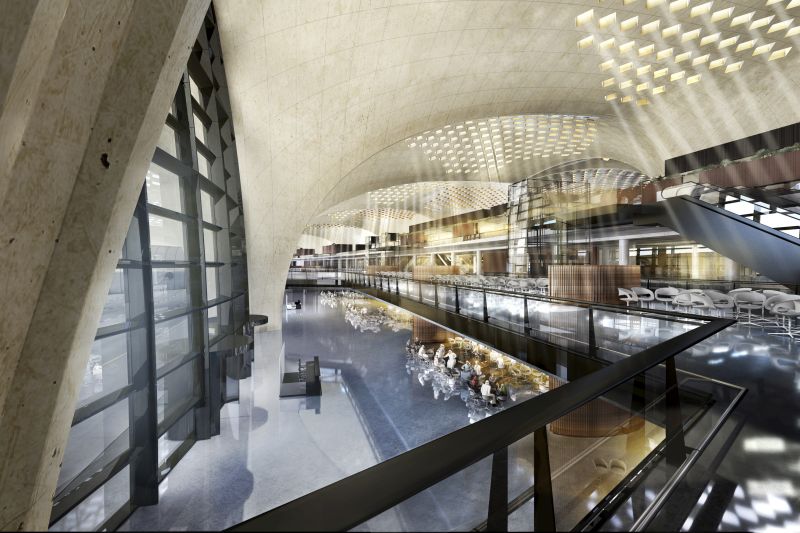 Inspired by local art and materials
The new terminal design is inspired by local art and architecture, while the construction materials being used are responsive to the climate since the airport is located in one of the hottest climate zones on earth. Drawing on the region’s culture of hospitality and welcoming guests to Kuwait, the design establishes an elegant and memorable arrival sequence for passengers, which includes a baggage reclaim area surrounded by cooling cascades of water.

In the first phase, the terminal will feature between 30 and 51 aircraft contact stands. There will be sufficient landside area for parking, as well as landside facilities including offices, DGCA headquarters and hotels. Other developments include a multi-storey car park, taxiways and aprons. Close to the building, the landscaping is a lush oasis, with strands of drier planting and species native to the desert climate extending further away from the terminal.

Going for gold to save the environment
Some of the sustainable features that will be incorporated in the terminal include many photovoltaic panels producing solar energy on the roof, natural daylight provided through 7 920 skylights, a roof overhang shading facade limiting solar radiation through glazing and energy-saving measures in the design reducing the annual cooling energy by 36%, compared to the standard baseline.

The new terminal project aims to gain LEED gold certification and become the world’s first terminal to attain this level of environmental accreditation. Foster + Partners has designed a flexible masterplan for the site, with the terminal strategically located to anticipate and enable future expansion.

Acknowledgement and thanks go to Foster + Partners, Zaha Hadid Architects and Safdie Architects for the information contained in this article.

Katlego Tshuma Announced as Winner of the 2020...

The kitchens get LBD