Across the globe, concrete projects stand the test of time, win awards and inspire awe. Walls & Roofs magazine reached out to local architecture firms to showcase what can be achieved when concrete is combined with out-of-the-box thinking and visionary end-results.

Boogertman + Partners The Houghton Hotel: Bringing the concept of fluidity to life

The 180 room Houghton Hotel and conference centre is situated on 168 acres of private, secure parkland / golf course unique in the middle of Johannesburg. It forms the knuckle and final piece of the development connecting two residential wings which house apartments on either end. The drop of 8m from the southern edge of the site to the northernmost edge has been utilised in the design to minimise the impact of the service plant and parking on the site and maximise the focus of views toward the parkland and cityscape in the distance for guests and residents. 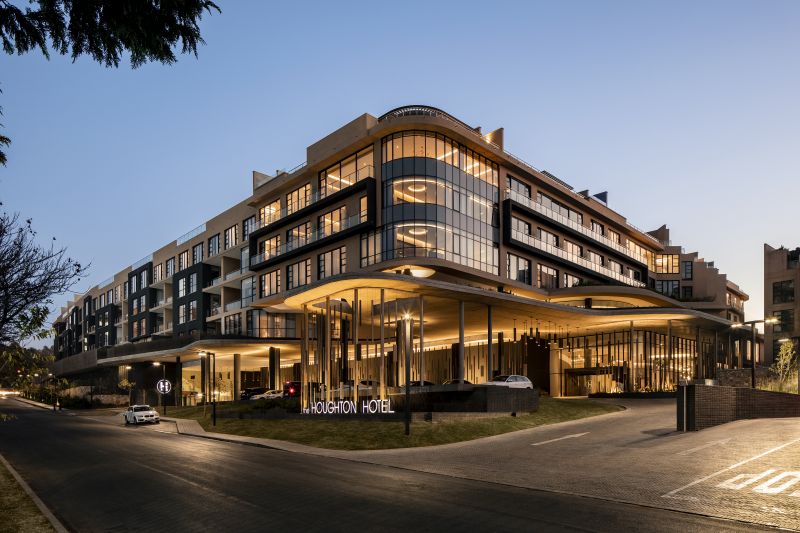 Concept of fluidity and nature made possible through the possibility of concrete
Embracing nature as its hero, the concept of fluidity inspired by the underground water system running through the site, and the aesthetic of rolling Highveld grasslands have informed the design and landscaping of the hotel and its surrounds. The use of concrete and its inherent fluid quality which enables it to be moulded in its plastic state played an integral part in realising the conceptual vision.

Throughout the hotel facades exposed undulating concrete curves create an aesthetic that mirrors the rolling nature of savannah grasslands and references the flow of water through the site. 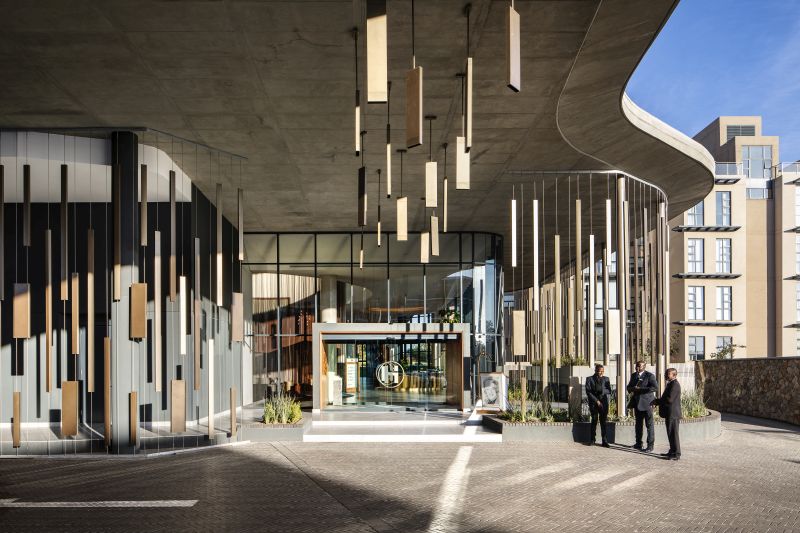 Several interconnecting concrete water features located throughout the two ground floor levels form a water stream that meanders through the various public areas, slowing down and widening in public gathering areas and even expelling over concrete edges as waterfalls at a number of points along the route. These waterfalls collect in pools which then feed further water concourses until the water leaves the site and fills the dams of the golf course.

The concrete finish was kept exposed where possible to showcase its natural textured quality juxtaposed against the high-tech material finishes of glass and steel. This is particularly emphasised in the extended sculptural concrete portico that protects hotel guests at the reception while creating a dramatic entrance for the hotel.

Thermal mass and comfort
Environmental comfort and the rate at which it’s achieved is especially important within a hotel. For this reason, concrete’s thermal mass properties combined with other passive thermal components, played an important role to ensure the optimisation of the building’s passive thermal strategy. This resulted in an increase in the overall building’s energy efficiency and offset the active thermal systems in place.

Prior to the formal sub-division of the larger site, Elphick Proome Architects Studio was conceived as one of four proposed freestanding office structures positioned parallel to the contours of the steeply south-facing slope.

The building footprint in the lowest portion of the site, adjacent to a wooded reserve, generated the largest floor area, which would allow the studio to operate on a single level. This position also allowed for separate street access and maximum exposure within the office park. 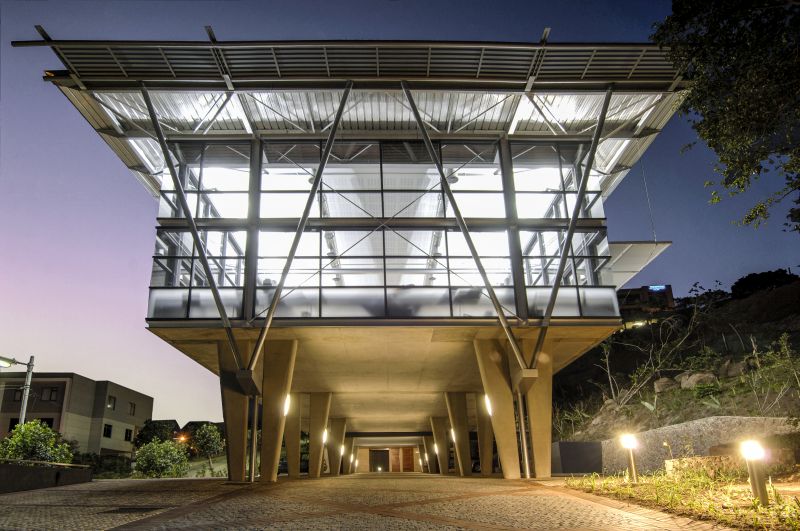 Off-shutter concrete is a resilient and expressive material which patently exhibits how it is formed.

The studio is arranged over two levels, accommodating a reception area, meeting rooms and directors’ workspaces which overlook a double-volume general workspace below. The design capitalises on the southern views and the immediate environment of the surrounding indigenous bush. The building form responds to this by becoming a rectangular glazed pavilion, elevated on tapering concrete columns that vary in height according to the slope of the site.

The west end of the longitudinal arrangement engages into the hillside, which allows entrance into the highest level of the building through a five metre high front door. This floor accommodates a reception area, meeting rooms and directors’ workspaces which overlook the double-volume general workspace below. 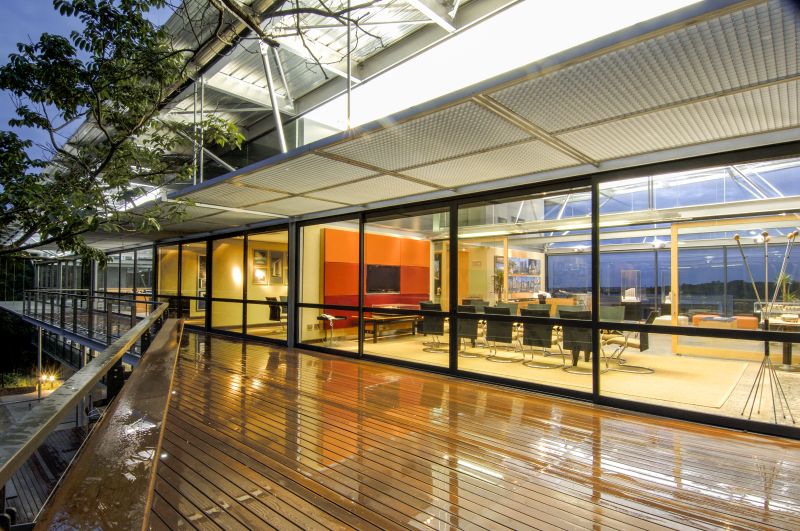 The parking is located within the diminishing volume of the lowest level. Within the garage area, careful attention to materials, structure and lighting creates a different but equally powerful staff arrival area.

Structurally the off-shutter finish concrete columns and wall elements support and brace the steel structure above. Inspired by the close relationship to the adjacent tree canopy, the roof evolved into an oversailing inclined plane supported by a steel structure of “branch-like” brackets. Having no vertical members, they allow the glass envelope to run unobstructed around the corners of the building and reach up to the oversailing roof above.

The roof spans the longitudinal axis, pitching with the gradient of the adjacent street. This allows for generous internal volumes to the upper floor reception areas and creates an elevated scale appropriate to the main entrance of the studio.

Contemporary material use is increasingly contextual and functional. Off-shutter concrete, raw clay brickwork, expressed steel and hardwood are widely exploited to deliver fine examples of new residential and commercial architecture. This is driven out of a need to reflect honesty and to derive longevity in the application of appropriate materials.

The firm frequently expresses the use of concrete rather than concealing it, as this displays structural honesty. Off-shutter concrete is a resilient and expressive material which patently exhibits how it is formed. Whether smooth or textured, concrete exudes a warm yet neutral quality.

House Nieuwenhuys is a four-bedroomed family home that Earthworld Architects completed in 2016. The estate was deliberately designed to be compact, with relatively high density and no boundary setbacks. The extensive brief called for innovative planning to fit in as much building area as the actual size of the site.

Earthworld Architects explored the relationship between a structure, its impact on a site and the architect’s role as mediator between landscape and man. It was decided that the structure should become a simple sculptural shelter. The entire site must become the actual dwelling. 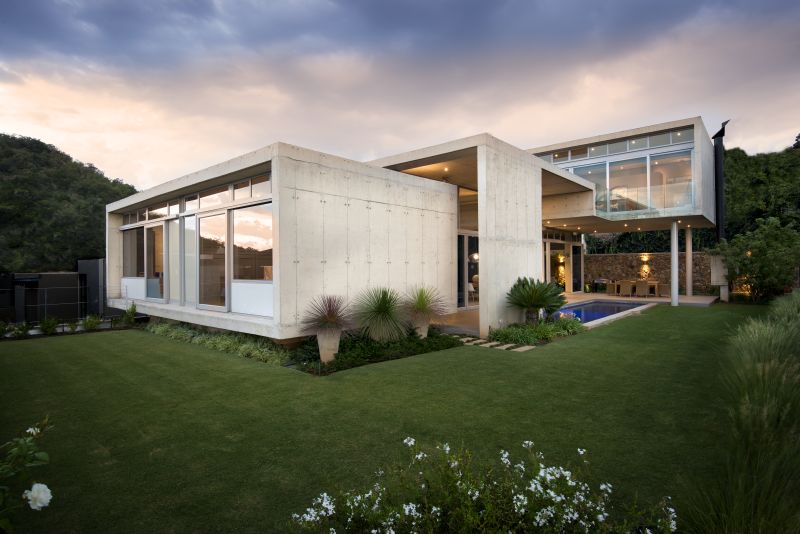 Concrete offers the opportunity to create a fairly light-shell structure. The vertical structure was kept as light as possible, with strong articulation of the horizontality and folded tectonic of the shell. It was very important that the structure should touch the site in as few a places as possible.

Employing steel in this context proved quite effective and articulated the concrete shell as a floating landscape. Even the “box-like” northern bedroom wing is elevated to give the impression of a floating box, touching the site very lightly.

Earthworld Architects was appointed for the University of Pretoria’s Future Africa Innovation Campus, which was completed in 2018. The brief required for a number of programmes to be accommodated on the campus, including a dining hall, a conference centre, research commons and 280 living units, with varying scales, ranging from single bedrooms to family units. A further requirement was to keep further expansions in mind from the beginning. 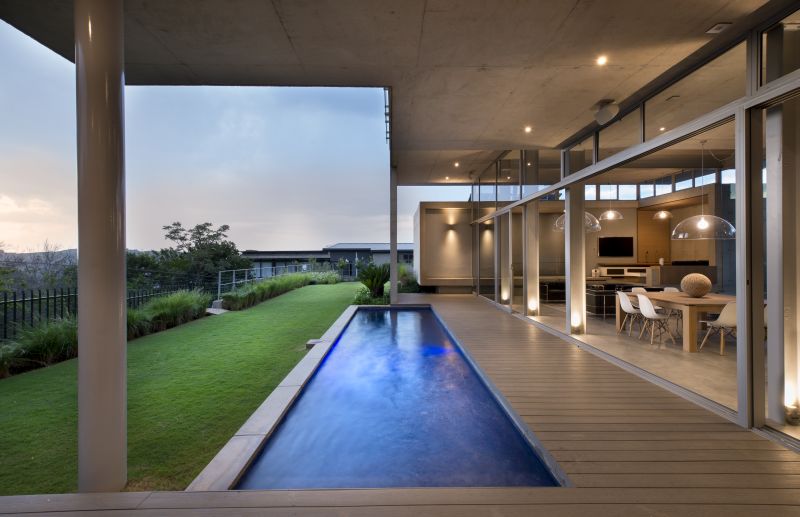 Architecture as the role player

The project required a holistic approach to the subsequent urban design and architecture of the campus, with a specific focus on how architecture can play a role in fostering critical thinking and research.

Located on the northern ridge of Strubenskop in Pretoria, the campus would anchor the southern edge of the university’s experimental farm, Proefplaas. The ridge offers panoramic views over the campus sprawling in front of it, allowing for a variety of interactions with Pretoria’s natural Highveld landscape.

From the outset, the intention was to challenge existing design and construction processes. Each programme would be addressed through a solution specific to each set of conditions. In order to minimise time on site, as well as to rethink how traditional materials are employed, 280 housing units are prefabricated from precast concrete and would be assembled on site, with services and fittings already installed.

Each living unit was constructed from a series of precast concrete modules, allowing for variations in composition and size. This approach improves quality control and challenges the traditional uses for precast concrete as a construction material.

The University of Pretoria’s Future Africa Campus informs the studies of the scholars it houses as much as the research they do can. The architecture of the campus plays an active role in shaping minds, as much as it does in shaping environments.

Full thanks and acknowledgement are given to www.eparch.co.za, www.ewarch.co.za and www.boogertmanandpartners.com for the information contained in this article.