Density is not the enemy of sustainable cities

By guest editor Gary White
Gary is an architect, urban designer and director at New Urban. He has received several awards for excellent work by the Charter of New Urbanism, USA and has co-authored an award-winning book named “Africa Drawn: One Hundred Cities”.
When it comes to designing and planning sustainable cities, density is the number one requirement for a city to work optimally. There is a minimum threshold before a city becomes sustainable and only at this point, the number of people who share the services and pay for the infrastructure make it viable.

For example, if 100 households can be served by a water pipe instead of only 10 – when the pipe has to be repaired, the tax pool from which the cost is covered is much bigger.

Taking into account that Pretoria is one of the biggest metros in the world, (surface area,the metropolitan area) providing services to the whole area with an average density of 800 people per square kilometre is not sustainable. And this is what needs to change.

The issue of land reform
Land reform also needs to be addressed in relation to the densities that cities provide. We shouldn’t only aim to provide housing for people close to where they work, but we should also provide it on such a scale that it becomes more democratic for everybody and so that much more people can have access to opportunities and benefit from the economies of scale.

People are starting to realise that to participate in the economy, one has to own property of which the value can grow. We often think too “permanently” about our cities and the current form, whereas we should allow for growth from within. 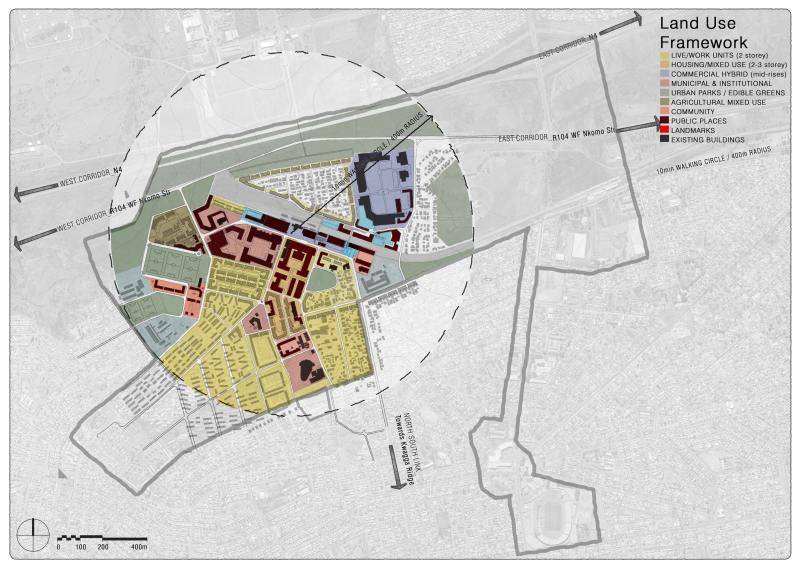 A Conceptual precinct plan for Saulsville

How do we densify our cities?
Great cities need to provide its residents with two things: Access and choice. All residents need to be able to enjoy everything a city has to offer.

Locally, density policies are not widely introduced, but the fact is that we need to get people much closer to certain opportunities. This requires a shift in both mindset and policy implementation, since we tend to explode our cities rather than to densify. The government should allow for higher densities and also make it easy for developers to participate – it has to be a strong public-private partnership.

In Pretoria, for example, there is big scope for densification. Our firm investigated state-owned land and underutilised properties within a 1,5km radius around Church Square in the central business district (CBD), did some calculations and found that if converted, about 1,5 million people could be housed in this area.

This means that in theory, the whole of Atteridgeville can move to the CBD, saving on time and transport costs, while the city could benefit in terms of increased sustainability of services and transport systems. When extending this to a radius of about 3km, the number of people that could be accommodated increases to 3 or 4 million.

At this stage, however, it is not lucrative for developers to work in the city because the inherent property value is too high. This is why they rather develop on the outskirts, where the property values are lower. This is where the government and private developers need to come together and work on how to bring that land to the market, providing not just residential units, but complete mixed-use environments. 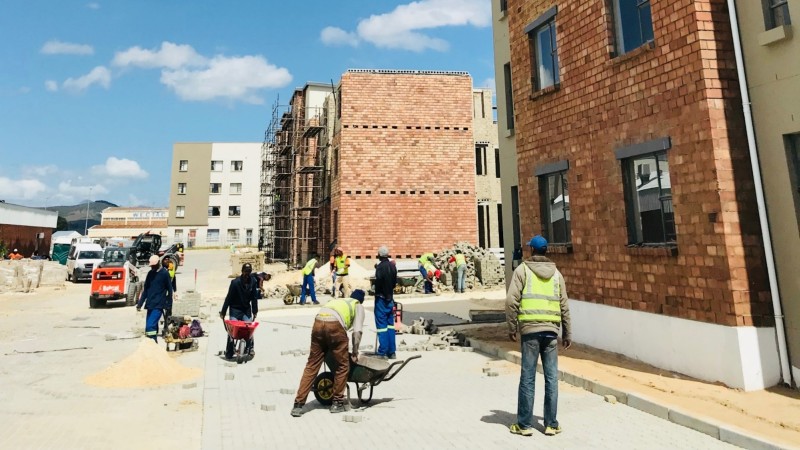 Construction of the South Hills Eco Centre in Johannesburg.

The importance of city planners
A few years ago, Pretoria Central was announced to be the node for all state buildings, but then the new building for the Department of Foreign Affairs was built about 6km outside of the CBD. A building of that size could have taken up between four and eight blocks in the city, with residential units on top. But one of the biggest hurdles is the fact that Pretoria doesn’t even have an Urban Design Department.

The National Development Plan 2030, which falls under Treasury, has set guidelines for good city planning by focusing on transit-oriented development (TOD), which sees the areas around stations being upgraded and developed. However, the Department of Human Settlements is not involved and the mandate doesn’t include housing, so the use of these new facilities is not maximised.

This silo approach is ineffective. The state mustn’t be the developer, but it must make it easy for developers to get involved and then it must ultimately pull everything together, taking the lead. It has to be a partnership.

Cape Town, in turn, is miles ahead of the rest of the country in terms of policy. There, one can’t submit plans for any new development if an urban designer isn’t involved to determine whether it fits into the bigger picture and vision of the city. 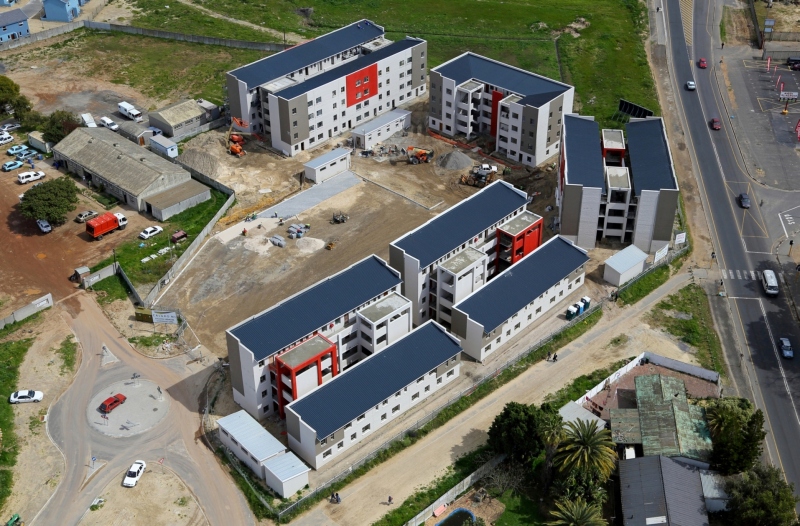 The implementation challenge
The problem with the gap between the public and private sectors is that, despite great urban design frameworks being submitted to councils, these are never fully implemented. Also, our policy documents are very technical with no room for discussion. But instead of squabbling about small technical details, we need stronger charters, specific principals and good implementation policies that reflect in liveable, people-orientated spaces.

We are seeing changes in this regard, for example in America, where more than 500 cities have adopted the form-based coding (FBC) approach, which regulates land development by using three-dimensional form, rather than the separation of uses. The code prescribes a practical framework for different zones of the city, within which to design, preventing the development of structures that don’t fit into the vision of the city and which have to be redeveloped a few years later.

The code is condense and easily understood by everyone involved – the developers, the city planners who has to approve and implement the plans, as well as the public. Miami is one of the biggest cities that has implemented this policy and has seen phenomenal economic growth as a result.

Now Johannesburg has also accepted a new spatial development framework which talks about coding, which is definitely the way forward.

Buildings should have more than just one function and probably the easiest way to do this, is to build residential units with retail outlets at the bottom. But besides having a second function, we should either add a social function such as a crèche, a recycling component which absorbs the building’s waste, or a food production component such as hydroponics or a vegetable garden on the roof. This will not only create more long-term jobs, but will also allow buildings to operate for more hours of the day. In turn, city life will become more sustainable.

Additionally, we should steer away from developing atrium buildings that don’t interact with the streets around them. In fact, it is only really the first eight to ten metres of a building that influence the feel of the city – it doesn’t matter what happens above it.

Develop great urban spaces
A good urban space is not about the buildings; instead it is about what happens in that first few metres on the ground and in-between. Walkability, easy orientation, safety and comfort are important for people to have access to the different choices offered by the city.

Barcelona is an example of a city that went from dirty and unpopular to one of the top tourist attractions. Just before the 1992 Olympic Games, the state started investing in transforming urban space and private developers followed suit. New York has 300+ city planners who work to make the city sustainable and in Europe there are many examples of cities trying to make the streets attractive for people to live outwards.

In comparison, an area like Sandton has spectacular buildings, but the areas in-between don’t work yet. It is not pedestrian-friendly and not easy or comfortable to navigate on foot.

South Africa is still a developing country and there are pockets within our cities that have to be rebuilt, but the quicker we can transform buildings into permanent and robust developments that can last for years, the better for us. 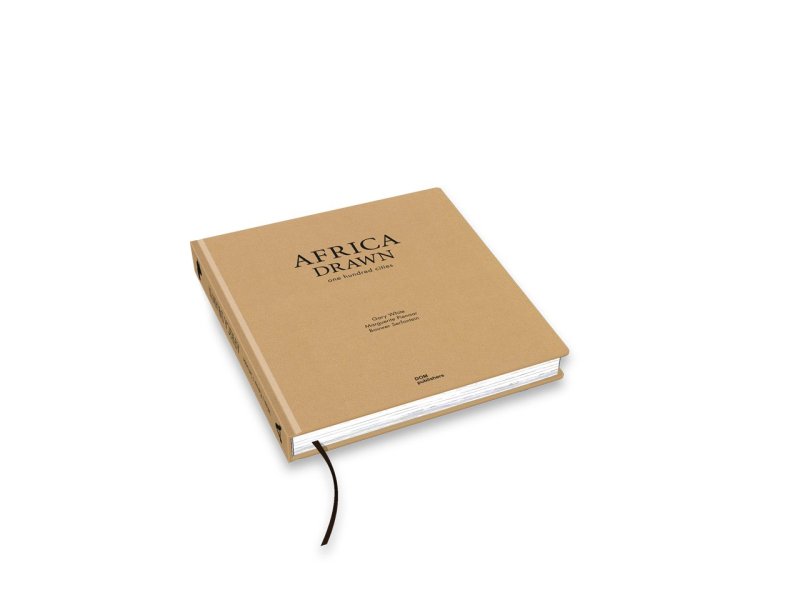 Top 10 Concrete options for your floors