Complex roof built with no BIM

When Mecanoo architect, Friso van der Steen, from the Netherlands, visited South Africa in 2015 and shared the fascinating story of the National Kaohsiung Centre for the Arts (Weiwuying) with architects in Pretoria, this massive development was still unfolding. Today, finally completed and opened at the end of 2018, it is the world’s largest performing arts centre in Taiwan.

Described as a new cultural hub for Asia, the complex includes a 2 236-seat Opera House, a 1 981-seat Concert Hall, a 1 210-seat Playhouse, a 434-seat Recital Hall and an Outdoor Theatre, and is home to Asia’s largest pipe organ, consisting of 9 085 pipes.

Tree-inspired, cave-like structure
The Dutch architecture firm, Mecanoo, conceptualised the architecture and programme specifically to combine artistic excellence with complete openness and accessibility to the broad public. Despite the enormity of the project, all building functions are housed under one roof, linked within a massive cave-like structure.

The expansive, undulating “crown” roof structure was inspired by the open, yet protective form of the local banyan trees. The continuous form is composed of a skin and roof that connect the extensive range of functions underneath. It brings the public, who can walk freely through the complex, in close contact with the arts. In fact, the vast winding space called Banyan Plaza, in the centre of Weiwuying, is open to the public at all hours and encourages impromptu street performances.

Where the roof curves to the ground, an open-air theatre nestles on the roof, with the surrounding park forming the stage. Designed with the subtropical climate in mind, the open structure allows the wind to blow freely through Banyan Plaza. The seamless flow between interior and exterior creates opportunities for even more crossovers between formal and informal performances.

Built like a ship – with precision
To form the intricate and uniquely shaped design, an impressive curved steel structure was built in cooperation with local shipbuilders from Kaohsiung’s ship-making industry. The complicated building skin was engineered in a single, continuous shape that is layered to create different levels within the building and which links the floors, walls and roofs of the complex. With absolutely zero repetition in the entire building, every square metre is shaped differently.

Interestingly, during the design phase, the architects didn’t yet have access to Building Information Modelling (BIM), so an absurd amount of 2D drawings was created – about 1 000 architectural drawings, plus many others from the rest of the project team.

For the cladding, the curved steel plates were cut with CNC machines in varying sizes and thicknesses. Each plate was marked with placement, location and welding info put together like a very big puzzle. 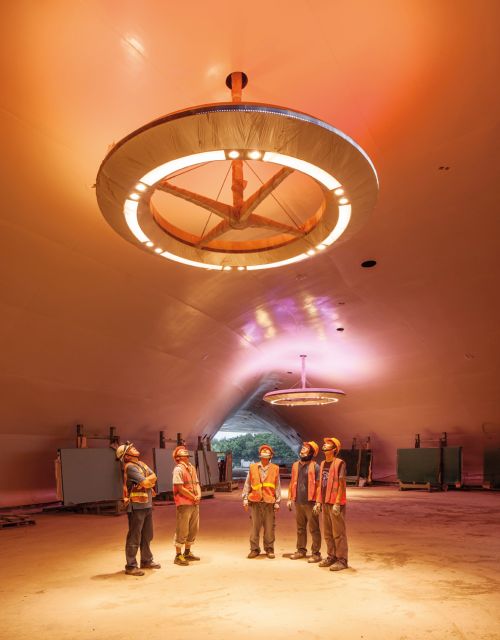 Since shipbuilders don’t build ships with any tolerance, these precision builders formed each individual skin plate of up to 4m by 6m big, to the exact curvature with hammers and without heat. Everything was engineered to necessity, exactly as was required for the best fit, and even when cutting the plates, the shapes were efficiently organised to minimise waste. This meticulousness won a lot of time during installation, since everything fit the first time. 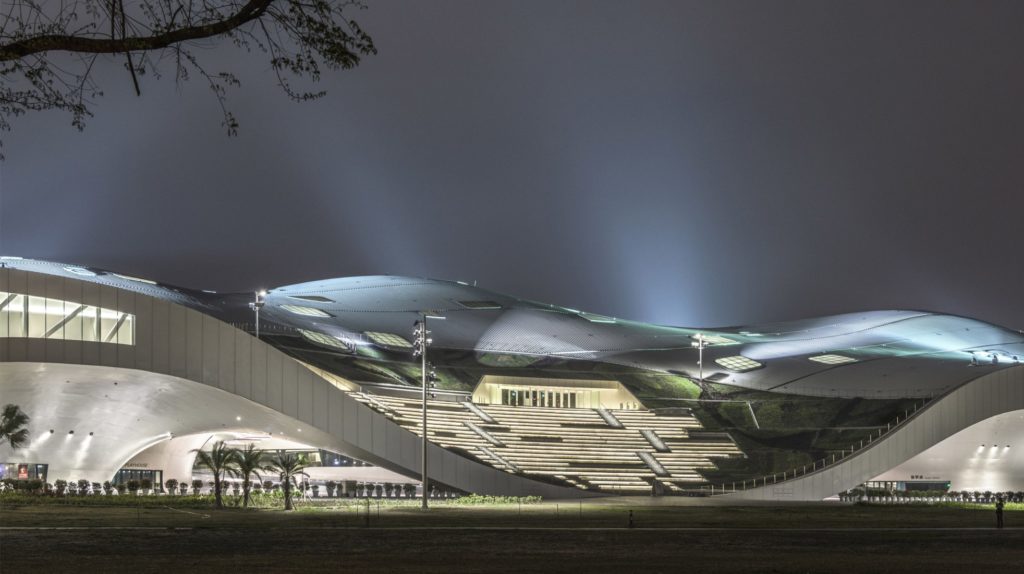 Transforming a city
The National Kaohsiung Centre for the Arts symbolises the transformation of Kaohsiung, once a major international harbour, into a modern, diverse city with a rich cultural climate. Located on a former military terrain, the cultural centre is now expected to have a positive social impact on the residents of Kaohsiung and beyond.

Acknowledgement is given to Mecanoo for the information and images used in this article.