Can our cities provide housing for all?

How big can our cities get? Well, we are only starting to find out. According to the State of South African Cities Report of 2016, the African population is growing at a rate of 2,55% annually with already more people living in urban areas than in rural areas.
Compared to the world urban population that is projected to increase to 66% in 2050, in South Africa, the urban population is set to reach 77% by 2050, growing by about 10% every two decades. Johannesburg, for example, is the 40th largest urban area in the world with a population of over 8,5 million and a density of 3 300 people per kilometre. The rate of urbanisation will be even higher in the rest of Africa, which is not yet as urbanised.

The report, however, points out that South African cities are not a mere consequence of globalised trends, but “since the removal of the apartheid-era constraints, cities have grown rapidly through a combination of natural growth and in-migration from rural South Africa and neighbouring countries”. And although the most rapid growth is in the large metropolitan regions, secondary cities and towns are also growing, with informal settlements being expanded.

The result of this urbanisation is an escalating demand for housing within metropolitan areas, which in turn brings challenges of sustainable urban planning and poverty. The report states that many African countries and cities are not prepared for the unprecedented population growth, and as a consequence, 40% of the global urban expansion is taking place in slums, which in turn leads to greater inequality.

At a human settlements seminar held in collaboration with Unisa in August, minister Lindiwe Sisulu acknowledged that urbanisation is a real challenge, but said that at the same time, it a powerful tool for development and the provision of adequate strategy to combat poverty, to provide adequate housing and to ensure access to basic services.

“One of the important lessons we have learnt is that small, isolated housing projects are not conducive to fostering integrated and inclusive human settlements and delivery at scale in order to deal expeditiously with housing and service backlogs,” she said. “We have thus embarked on repositioning human settlement projects based on the so-called 3C protocol, namely: Coordination, Cooperation and Collaboration.”

This protocol will serve to develop “catalytic” mega projects with a minimum of 15 000 rental, subsidised and mortgaged housing units supported by engineering, social and economic infrastructure, with each project providing housing for an estimated 45 000 to 60 000 people. Strategic partnerships with the financial sector, developers, built environment professionals and communities will be instrumental to successful delivery.

The upgrading of informal settlements will also be an integral part of the mega-project approach. The focus will be on establishing tenure security, provision of basic services and infrastructure, community participation and skills development, livelihood creation, incremental housing development and support, social facilities such as clinics, schools and playgrounds, as well as safety and security.

The integration and sustainability of residential areas are further a vital goal, which is why the department’s projects – the N2 Gateway in the Western Cape, Cosmo City in Gauteng, Zanemvula in the Eastern Cape and Cornubia in Durban – are integrated communities. These developments cater for various segments including breaking new ground, mortgage or bonds, and social housing.

Plugging the gap
According to Statistics South Africa’s GHS Series Volume VII report on housing from a human settlement perspective, the percentage of households across all income groups who feel that they have problems with the affordability of housing increased from 50,7% to 70,1% between 2009 and 2014. About two-thirds of households in the poorest quintile spend more than 50% of their income on their rent/mortgage costs.

This reiterates the importance of providing “gap housing” in addition to the social housing provided by the government. Gap housing describes the shortfall in the market between residential units supplied by the state and houses delivered by the private sector. It comprises people who typically earn between R3 500 and R15 000 per month, which is too little to afford a house in the private property market, yet too much to qualify for state assistance.

Cape Town: Building an inclusive city
Cape Town’s inner city precinct specifically faces huge challenges in terms of providing affordable and gap housing. At the Affordable Housing Africa Conference held in July, the City’s MC for transport and urban development, councillor Brett Herron, mentioned that Cape Town’s population has increased by 56% between 1996 and 2016. In addition, high-end developments are rising at a rapid pace in the proximity of the central business district (CBD), which leads to the displacement of especially tenants in rental properties.

“We estimate that approximately 650 000 families earning less than R13 000 a month will rely on us for some kind of assistance for housing between now and 2032,” he said. “This is partly as a result of unemployment, slow economic growth and rapid urbanisation.”

To address this challenge, the city has identified ten state-owned sites to be used for affordable housing opportunities in the city centre, Salt River and Woodstock. The proposed developments will provide a combination of social housing (state-subsidised rental units for households with a monthly income of less than R15 000) to gap rental housing (for households with a monthly income of between R3 500 and R20 000) and will be close to MyCiTi stations and rail stations. Retail and office space will, in some instances, be developed to cross-subsidise the housing opportunities and ensure its long-term financial sustainability.

An investment-like approach will be followed and where appropriate, city-owned land parcels will be made available to bidders from the private sector for development but at the same time will employ mechanisms to ensure that these housing opportunities are not outpriced, but integrated within the communities where they are located.

“We are moving away from a piecemeal development approach towards a precinct development approach, which will be applied first in these inner-city areas,” stated Herron. “Affordable housing is not merely the provision of units to lower-income households, but a long-term investment in our urban fabric and form.”

In addition to the provision of housing opportunities in the central business districts, the city is further developing a strategy for smaller inner-cities such as Bellville, Parow, Khayelitsha, Claremont, Mitchells Plain, Wynberg and Plumstead. Not only will suitable land be identified, but also buildings that can be developed or converted into affordable rental accommodation.
Innovate to generate
Growing inclusive cities won’t happen organically and urbanisation therefore also brings opportunities for creativity and innovation. In fact, the time is ripe for built environment professionals to come up with innovative ideas, explore new visions and rethink past development strategies to provide quality, but low-cost housing to as many people as possible.

And since affordable housing is not only a South African problem, but rather a worldwide one, we might be inspired by some out-of-the-box thinking from elsewhere.

How about half a house?
Almost ten years ago in Chile, former Pritzker Prize winner Alejandro Aravena’s firm Elemental came up with the idea of creating “half a house” – building the frame and essential spaces for each house, but leaving the rest for residents to complete according to their needs, as and when they can afford to do so. Not only does it allow governments to provide well-designed housing at lower costs, but residents can improve their homes and gain value over time. 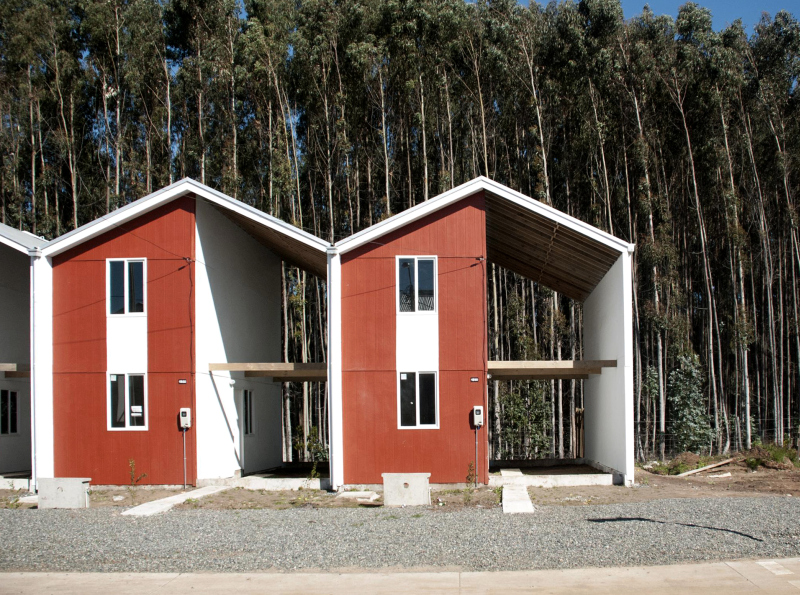 Instead of being funded directly by the government as other “half a house” projects, Elemental’s Villa Verde project was commissioned by a large company looking to provide homes for employees via the government’s wider social housing fund. These house are at the slightly more expensive end of social housing, but still provide homeowners with the flexibility and space to expand. Courtesy of Elemental, ©Suyin Chia

The DIY apartment
Another take on the idea of an “unfinished” home emerged when a consortium called deFlat came up with a plan to save the Kleiburg apartment building in Amsterdam from being bulldozed.

Designed in the sixties, it was the last building in the area still in its original state, but a thorough renovation was estimated at about 70-million euro. After fierce resistance against the planned demolition, Housing Corporation Rochdale launched a campaign to rescue the 400m-long building, standing eleven storeys high and comprising 500 apartments.

The “Klusflat” proposal entailed turning the 500 apartments in the building into DIY projects. The idea was to renovate the main building structure, but to leave the apartments unfinished and unfurnished: No kitchen, no bathroom, no heating, no fittings and no rooms. This would minimise the initial investment and as such created a new business model for housing in the Netherlands.

Future residents could buy the shell for an extremely low price and then renovate it entirely according to their own wishes. A further ambition was to open up more options by combining two flats (or more) into one by making vertical and horizontal connections.

The renovation was carried out by NL Architects and XVW Architectuur, and won the Mies van der Rohe Award, one of the most prestigious architecture prizes in Europe. 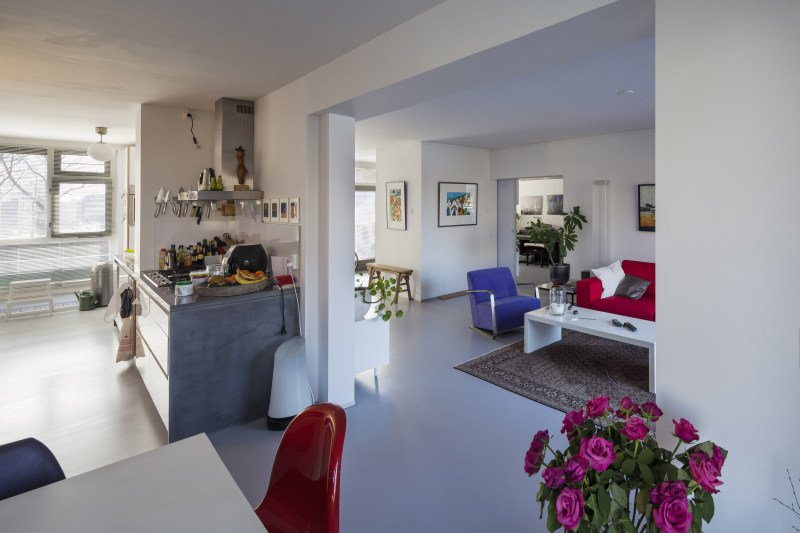 The DIY flats in the Kleiburg apartment building in Amsterdam come unfinished and unfurnished to keep the cost down. It is then up to the residents to develop and fit out the interior at their own pace. Courtesy of Stijn Brakkee, www.scagliolabrakkee.nl 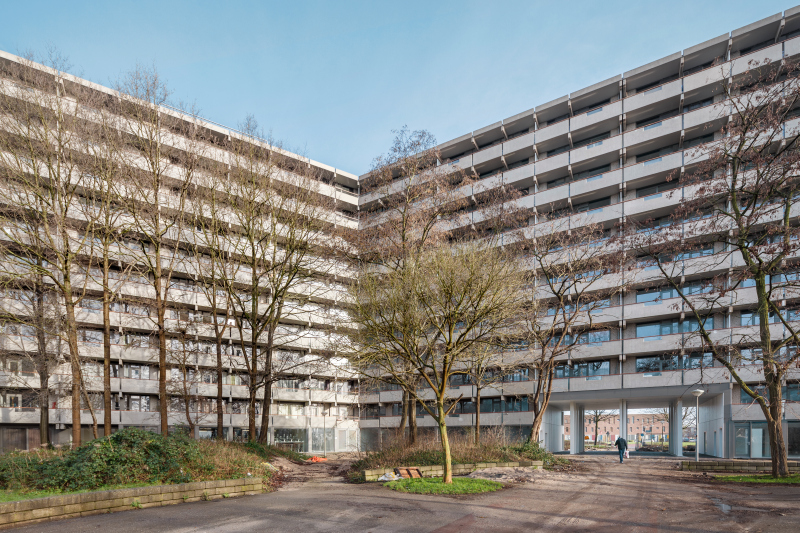 The idea of an “unfinished” home emerged when a consortium called deFlat came up with a plan to save the Kleiburg apartment building in Amsterdam from being bulldozed, providing a low-cost housing development model. Courtesy of Stijn Spoelstra, www.stijnstijl.nl

The Dutch company is currently investing in setting up a worldwide network and is considering development opportunities in Johannesburg.

A social mind shift
These international models might provide a real solution to put homeownership within reach of both low- and medium-income households, and propose a strategy to enable residents to formally expand and improve their homes, while at the same time growing an investment that they can call their own.

Full thanks and acknowledgement are given to the South African Cities Network, Elemental, XVW Architectuur, http://superlofts.co/en/, Statistics South Africa, www.dhs.gov.za and www.capetown.gov.za for the information used in this article.

In this article:
•    The rate of urbanisation.
•    The Department of Human Settlements’ approach.
•    How the City of Cape Town is addressing housing.
•    Innovative ideas for low-cost housing from across the world:
–    A half-built house with room for expansion.
–    Unfinished shells that can be developed over time.

Caption Main Image: Bridge City, a joint venture development between eThekwini Municipality and Tongaat Hulett 20km north of Durban’s CBD, will see a landmark affordable/gap housing project to be built by Calgro M3 in the midst of a new development strip. This is an artist impression of the housing project. Some 356 apartment units will become available from about R499 000. Most of these will comprise two bedrooms, one bathroom and open-plan living areas with finishes including granite kitchen tops, ceramic tiles, burglar bars, security gates and built-in cupboards in the main bedroom. As part of a mixed-use precinct, it will be close to commercial and retail developments, a state regional hospital, regional magistrate’s court and will be serviced by eThekwini’s Go!Durban Integrated Rapid Public Transport Network public transport system including rail and BRT busses.

The blurry lines between traditional archetypes

New ER in Texas is a spatial, sensory...

CHRYSO VerticArt carves a place at The Leonardo