BIM in South Africa: The good, the bad and the promising

Sera Korff, a German student who completed his Civil Engineering degree at the University of Cape Town and a whitepaper on the current state of BIM in South Africa and what the future may hold conducted an interview with Lourens Henning (Certified Architect & BIM Practitioner). In the following interview Korff addresses South Africa’s potential to keep pace with international BIM developments and shared his insights. This extract was taken from Vaughan Harriss’s eBook BIM It’s your move.

1. What factors are holding SA back from adopting BIM?

The weaknesses that slow down South African BIM implementation and risk them being left behind in the international BIM uptake basically add to a few main problems.

• The socio economic landscape in South Africa
High unemployment and a glut of cheap and available unskilled labour has created an economic and political climate in SA where job creation often comes before productivity increases. Many BIM benefits are based on productivity increase (through prefabrication) which makes it politically unpopular. BIM benefits all parties involved, when applied consistently. This requires buy-in and investment from all stakeholders, with a common end goal.

• Public Sector
The BIM movement (including institutes and guiding bodies) are comparatively underfunded. This has led to lacklustre support creating BIM guidelines and a glaring need for publicly financed BIM projects that start the ball rolling.

• Private sector
There is also a noticeable disconnect in the private sector as private companies focus on their short-term development (and profits) to the exclusion of the medium and long-term gains that BIM development offers. We also see a disconnection between interest groups and big companies who don’t share knowledge or collaborate for an effective collective BIM uptake and unification of BIM applications.

2. What does South Africa have going for it?

• The SA Construction sector is at par with that of the UK and Germany (for instance). There is no reason it couldn’t form a stable base on which to build the BIM infrastructure.

• More established construction companies in a decent financial position, and (like companies in the UK and Germany), are motivated to use BIM to boost productivity.

• The South African BIM initiative is at least as active and as visible as the UK and Germany, even if it is much smaller.

• The country suffers a low client demand and a widespread silo approach, but this is mirrored in the UK and Germany.

In some ways South Africa is even better positioned to implement BIM than many other countries. 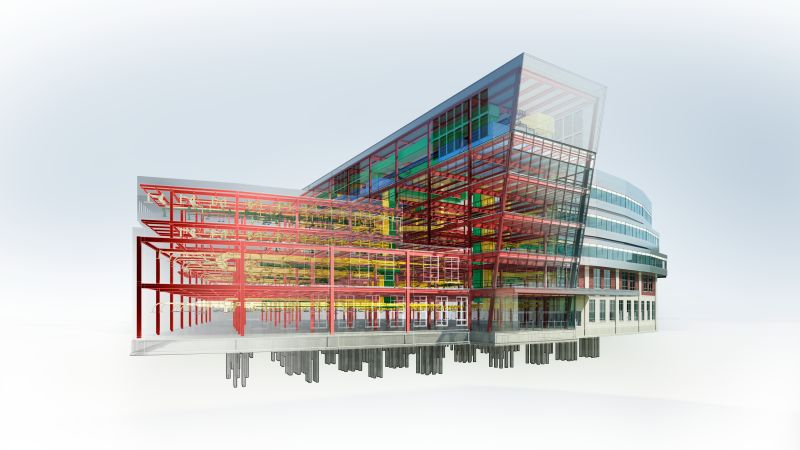 3. But without demand, will BIM ever be adopted?

4. Are there any other bodies that are supporting the BIM initiative?

5. Will government’s involvement result in a big BIM push?

Henning points to the legal battle that early adopters have struggled with. These especially centre around ownership and liability and are inevitably going to crop up in South Africa. They are critical issues that, once legislated and precedent is set, form an integral part of the system.

Looking at some mind-blowing buildings around many African cities’ skylines, Revit or Archicad deserves much credit. The designs are exceptional, brimming with design creativity, yet the contractors that construct the building have little use for the model information provided. They generate their own quantity take-offs and information they way they prefer to do it – re-engineering the Bills of Quantities. Contractors still want 2D drawings to work off, and that’s a fact. But do they know that 2D drawings can be extracted from a 3D Model?

Henning concludes by stating questioning even if the above statement still rings true, can we agree that globally construction is changing rapidly? The hope is that future architects, engineers and contractors still think like professionals and not only see BIM as a software tool.

Acknowledgement and thanks go to the ebook “BIM – It’s your move” on https://www.biminstitute.org.za

Designing an open-plan office that works and wins awards!

Reshaping the architect’s role with the client

Reclaiming our streets should be the new design...

Cities will be better and will survive COVID,...