A museum for the people

The uMkhumbane Cultural & Heritage Museum, situated 7km from the Durban central business district (CBD) in Cato Manor, is the first public cultural building developed by the eThekwini Municipality post-1994 to preserve the rich cultural and political history of the area.
Named after the river that crosses what is one of the largest forced removal sites, the uMkhumbane Museum remembers the township as a vibrant and diverse community in Durban during a time characterised by separation and serves as a tool for social, economic and ecological regeneration. The museum will display various exhibitions about the area as well as the Zulu history and culture, and will host cultural activities that involve the community.

The site is also significant as it was chosen by Zulu King Goodwill Zwelithini for the reinternment of his mother, Queen Thomozile Jezangani Ka Ndwandwe Zulu. The queen lived in Mayville as a domestic worker in her later life and was recently found in a mass grave. She became a muse to the museum, and her contrasting life story is now honoured in traditional Zulu ceremony and contemporary architectural expression. 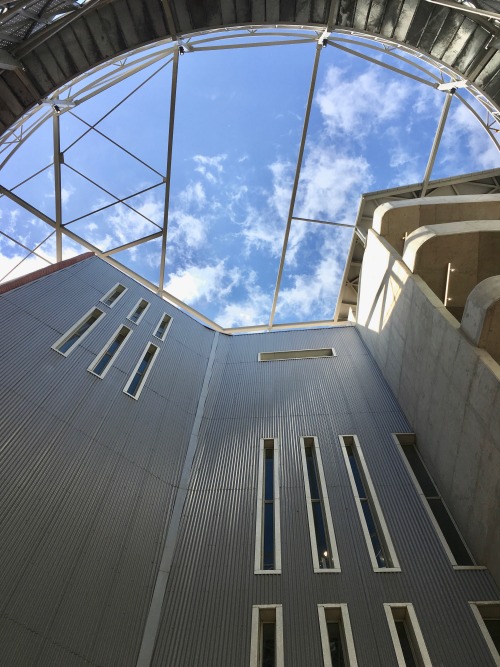 A building worth building
Architect Rod Choromanski points out that the building is expressing place, therefore the exhibition tower in the current phase was elevated as a cultural emblem to relate to significant landmarks within the area and back to the City as it’s the first new museum in approximately one hundred years. “In fact, it comes from the earth through the use of concrete, clay brick and metal. In Africa, I believe that one should limit your materials and keep it powerfully grounded,” he explains.

The exhibition tower was constructed out of three primary materials: First, a concrete structural skeleton elevates the building over five floors, peeling away from the main atrium to create volume spaces for exhibitions on various levels. Secondly, the red facebrick exterior skin was cut by the community builders, which were laid into place to create a sculpture. And finally, the prefabricated, laser-cut aluminium screen forms the atrium to the entrance to where the ephemeral sun and shadow gives the building its distinctive identity.

Choromanski further mentions that the site contained an abundance of waste and a degenerative river, and that the principles to this project, were to assist in regeneration of culture,environment and economic development which forms part of a bigger urban masterplan.

“If a project does all that, then it is worthwhile building. It is about working together and setting guidelines for developers to follow in order to create something for the people,” he states.

Best in Africa
The building was recently named the overall winner of the Africa Architecture Awards for inspiring the future of African architecture.
The Africa Architecture Awards Programme complimented the complexity of our team’s process that shares in the many voices who supported this community over time, which inspired us to take meaningful steps, in honour of their vision. It is an ongoing resilient, enduring project with many twists and difficulties, which is led by the eThekwini Municipality, supported by the Durban Community and now leading Africa to proudly stand on the world’s cultural stage,’ said Choromanski.

Full thanks and acknowledgement are given to Choromanski Architects and Africa Architecture Awards for the information contained in this article.

Caption main image: The uMkhumbane Cultural & Heritage Museum with the Queen Thomo Crypt in the front. Courtesy of Choromanski Architects

New president-elect for the IIDA

What shopping centre managers need to know about tech disruption

3 innovations for a better construction future

A modern spin on old masterpieces

The house with the many angles