A lesson in polite architecture

Transformed by multidisciplinary design studio, dhk Architects, 32 on Kloof’s rich history has been respected via a contemporary aesthetic that references, rather than replicates, its existing heritage.

Rich history
UTC, a South African subsidiary of the United Kingdom’s Imperial Tobacco Company and the United States’ American Tobacco Company, was founded in 1904. Shortly thereafter, the company began to acquire portions of what had been the Nooitgedacht farm on the doorstep of the historic Company’s Gardens to establish premises for manufacturing cigarettes and tobacco products.

Several buildings were erected in phases between 1900 and 1922, forming the UTC campus which comprised a warehouse, factory and staff facilities.

The collection of historic red and white masonry buildings still occupies the 112-year-old precinct and has since been recognised by the Western Cape Government as heritage buildings to be protected and preserved. 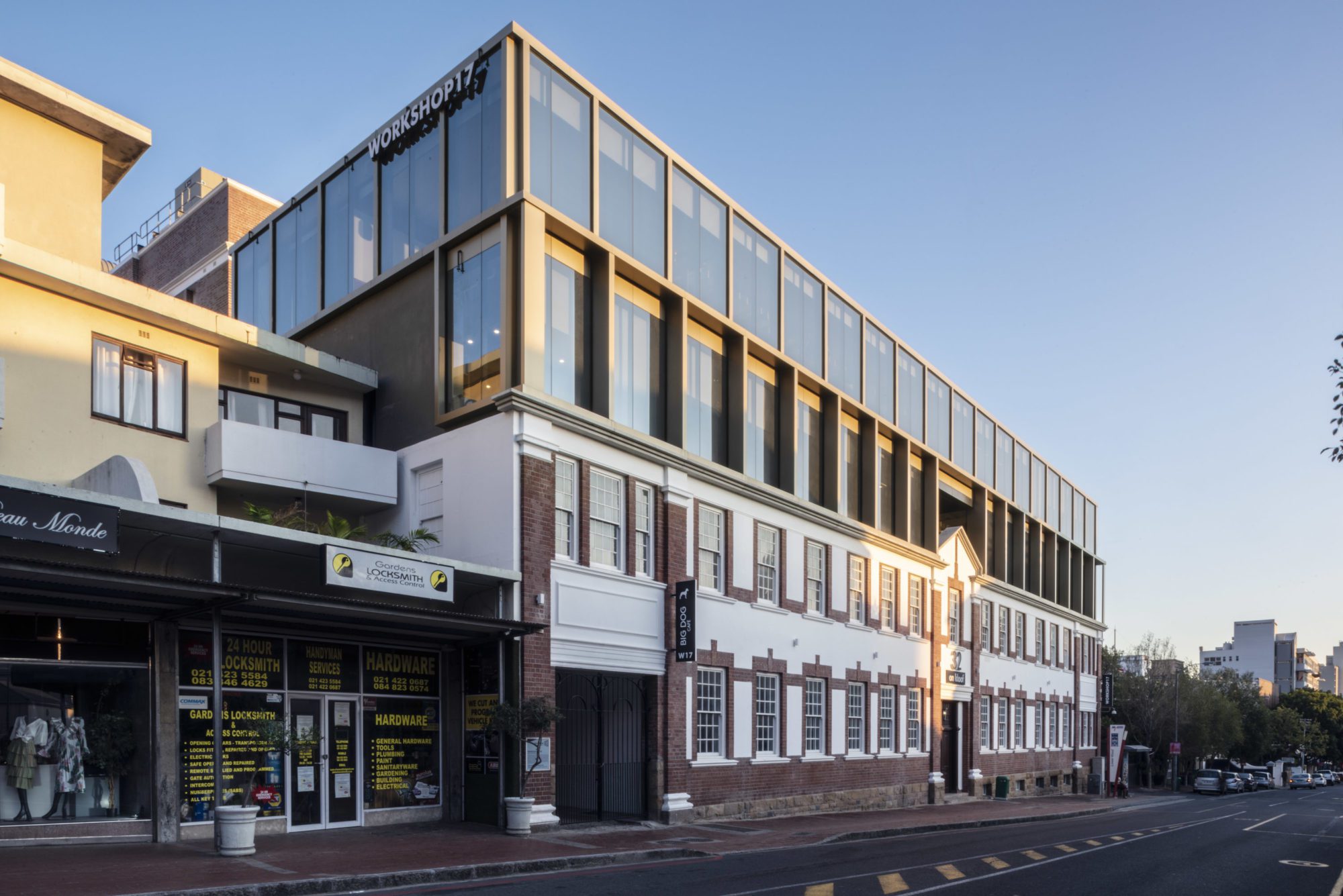 Ultimately, the client’s vision was for 32 on Kloof to serve as the attractive “front face” of the Longkloof precinct concealed from Kloof Street. The client brief for Longkloof’s catalyst project, 32 on Kloof, was to establish additional premium rentable space by adding two floors to the existing building, maximising the floorplates and reinventing the windowless basement. 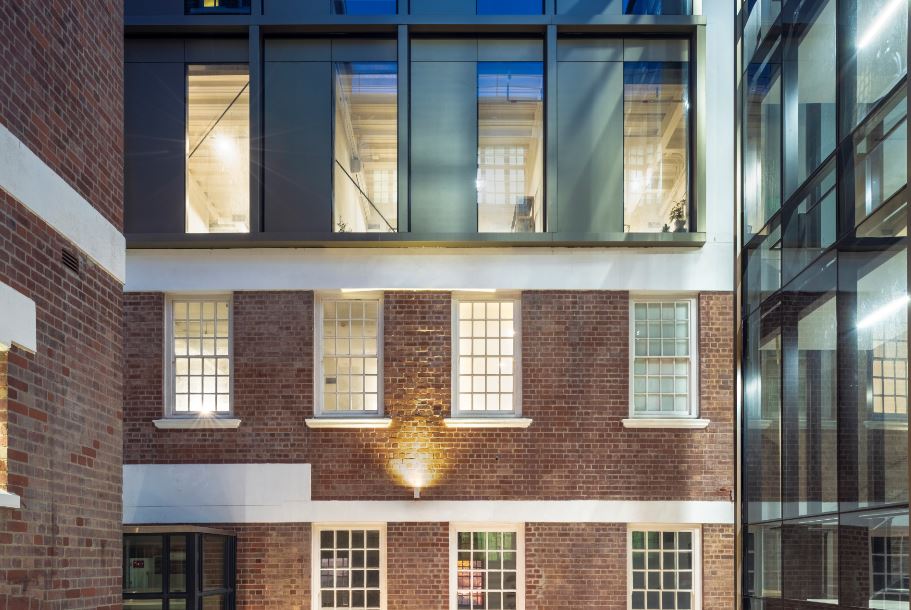 dhk’s response was to respect the buildings’ heritage and intentionally contrast its existing order and rhythm with a new contemporary addition. This concept allows for an honest dialogue between heritage and contemporary elements, forming a hybrid of architecture that politely enhances the building’s street presence.

Hybrid in architecture
To increase the building height and provide additional commercial space, the existing hipped red-tiled roof (originally added in the 1990s) was removed to allow for a two-storey orthogonal addition atop the heritage masonry building.

Not only does the glazed facade showcase the property’s enviable Table Mountain and City Bowl views, but the two distinct levels provide a clear distinction between old and new – referencing, not replicating, the building’s heritage.

Deep expressed aluminium-clad fins articulate the facade, contrasting the historic building’s order and rhythm while acting as a “stitching device” integrating the heritage detail with the contemporary portion. 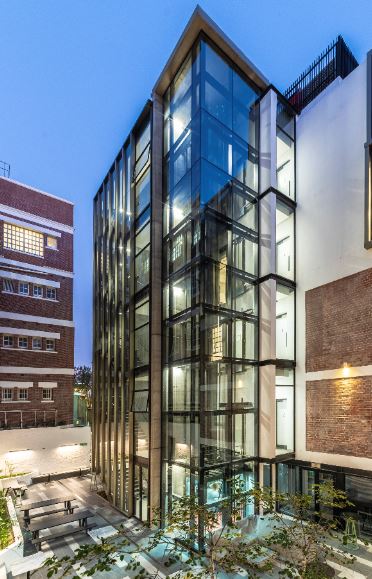 To ensure a single articulated composition of contrast, building setbacks permitted by Heritage Western Cape were contested. Overall, the minimalist design refrains from competing with nor detracting from the building’s heritage, ensuring that the total building mass and scale are sympathetic to its surroundings.

Pierre Swanepoel, a partner at dhk and lead architect on the project, says: “32 on Kloof respectfully enhances the streetscape of Kloof Street, creates frontage for the Longkloof precinct behind it, and serves to protect, preserve and celebrate the heritage of the building. Marrying historical and contemporary influences, the building successfully pays homage to our past while looking to the future.”

Co-working with a view
Occupied by Workshop17, a provider of co-working spaces, the building offers 30 private offices, nine meeting rooms, three boardrooms, a seminar room, an event space and bar, six lounges and libraries, a courtyard and café. Striking yet respectful, the contemporary addition modernises Kloof Street’s streetscape and serves as an indicator to the upgrades occurring behind the building. 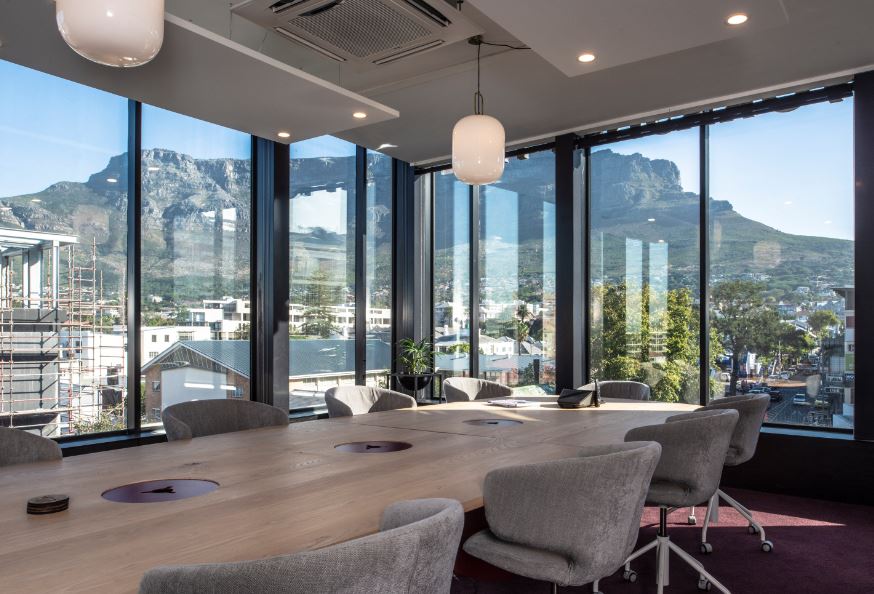 The new sunken courtyard is another notable element of the design. Constructed at the rear of the building, the courtyard was reinstated by demolishing the two-storey 1990s annexe building and lowering the existing courtyard to align with the basement level.

The existing retaining walls were broken out to create new glazed frontage facing the courtyard, with external staircases on the northern and southern ends connecting the courtyard to Kloof Street and the remainder of Longkloof. A café occupies the courtyard and basement, engaging the local community and forming an exciting new hub of activity within the area.

The building’s vertical circulation, a contemporary glass-clad lift and stair core, was primarily relocated from inside the building to the sunken courtyard – outside the footprint of the heritage building.

The significance of relocating the circulation is that it again acts as a “stitching device”, which provided the required floor space within the main building footprint and the opportunity for an open-plan layout with a potential split tenant. This maximised the usability and quality of the rentable office area without detracting value from the historic building. 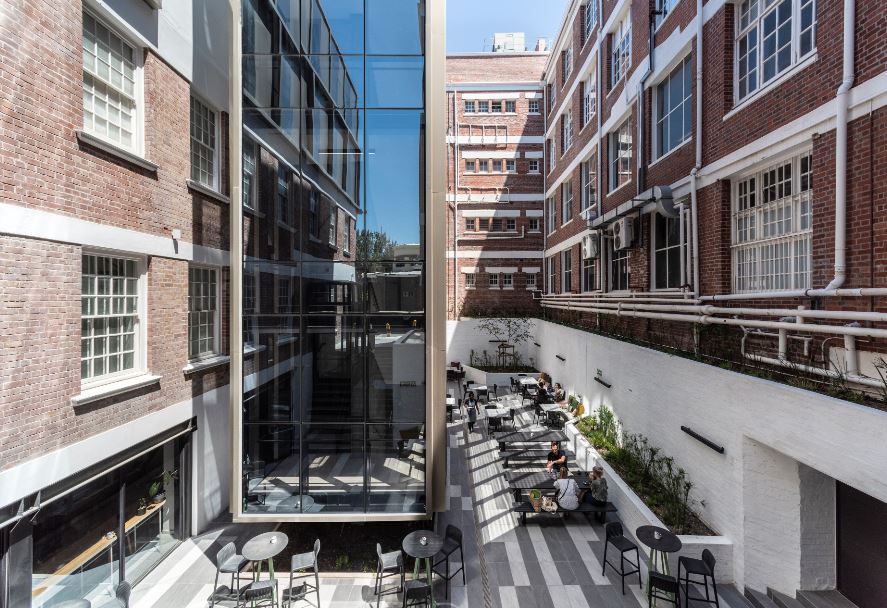 Overall, the modernist and minimalist aesthetic of the new addition is juxtaposed against the ornate detailing of the original masonry building. This allows a new tectonic extension to celebrate rather than dominate the historic stereotomy of the building below.