Elphick Proome Architecture in Durban recently won a KZNIA (KwaZulu-Natal Institute for Architecture) Award for 90a Bellamont. The project commenced in September 2015 and was completed in February 2018.

The enclave, an exclusive group of villas, was created by the architect/developer to capitalise on the remarkable environmental quality and prospect of the site. The villas are 550m² each, with the property being 5 200m².

The architect originally purchased the site to build his own house many years ago and subsequently decided that, with a family of adult children, the need for a large home was unnecessary. The choice to share the opportunity and develop the site with three other villas then become the development directive. Densification of urban and peri-urban areas is a nationally mandated initiative and this model plays directly into this imperative.

Shared living on large-scale estates is a common security and relatively exclusive lifestyle solution in South Africa, but this scheme intended to reshape and refine this idea into a comparatively minuscule development. Ultimately the architect retained one villa and sold the others to longstanding friends, and has proved to be a wonderful outcome. 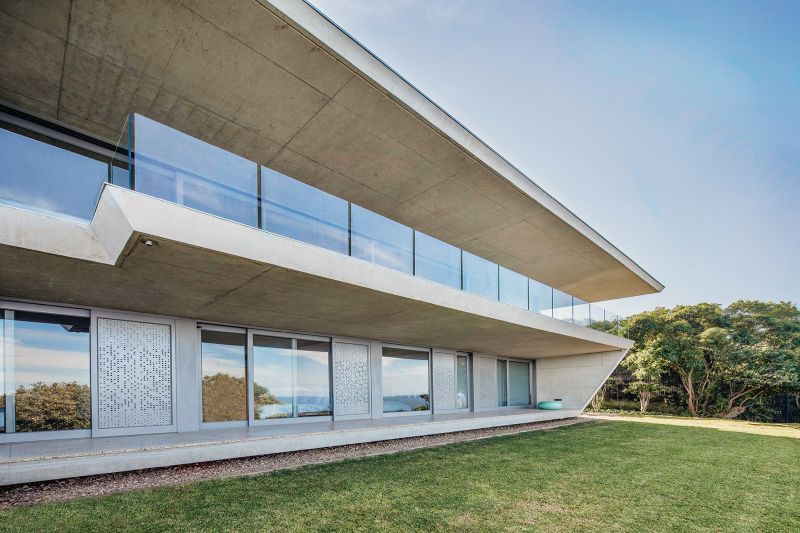 The planning of the enclave of four villas, generated in two building clusters set on a slope overlooking the Indian Ocean, creates a small, private community on a secluded and verdant site. The form of the buildings is directly generated from this sectional condition and the prevailing coastal climate.

Further intrinsic demands related to the planning and overall design were the need to maximise unfettered interior/exterior spatial connections, create large shading to the extensive glazed areas, create broad spans and stretch the limitations of the material into responsive sculptural forms. The outcome is a dramatic representation of these motivations and a proven success in terms of living in the spaces created and the powerful form delivered. 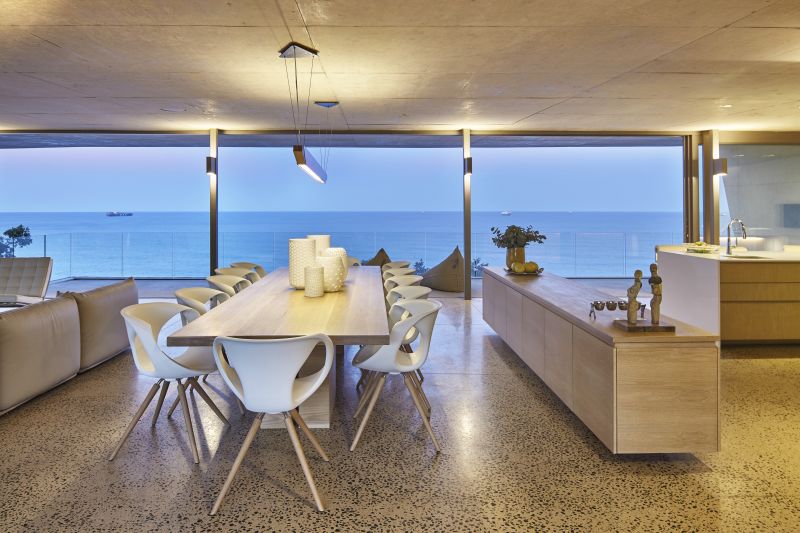 Project challenges
Some of the challenges of the project included the conversion of land rights from single residential to multiple residential. Site conditions and privacy also proved to be a challenge within a shared living scheme. The enclave is set on the upper slopes of a dune with a notorious soil slip condition and an imposed height restriction.

To overcome the conversion from single to multiple residential, the density of the development was slightly reduced.

Height restrictions and privacy were addressed through the two sets of conjoined villas, one on the upper zone and the other on a lower platform on the fringe of the forest, being carefully placed in an offset, sectional arrangement that maintains and protects the outlook and privacy of all indoor spaces, verandas and outdoor courtyards.

The contours and variant sea view prospects related to elevation, informed this angular planning offset and vertical calibration of the levels. The soil condition was addressed through intensive engineering to the buildings’ foundations.

A desire for simplicity and boldness

Architecturally, the design drivers were a response to site conditions, context, climate, the desire for simplicity and boldness of form and the generation of a legible series of spaces. These ultimately delineated living and sleeping accommodation, using an unconventional layering of living on the upper level and sleeping spaces on the lower. The deployment of concrete to facilitate the architecture is clearly evidenced in many aspects.

The dictum “The plan is political and the section is poetic!” singularly directed the form of the buildings, with the functional convention in two-storey houses being overturned in the generation of “upside-down” houses, allowing open, expansive living spaces to occupy the upper levels.

This sectional concept precipitated the principle of the roof as a generous “umbrella” promoting complete spatial connection between the landscape and the interiors. Concrete was the obvious solution to deliver this concept and so with a gentle roof incline from an offset spine to the sea and another to the courtyards, engagement with the landscape is subtly promoted.

The form plays out into an angular layering of projecting verandas on the upper levels and balconies to the bedrooms on the lower levels. These are connected with a pair of raking blade walls in the centre of each composition creating a simple linear trace. Extensive cantilevers exaggerate the reverse raking section to deliver a frame which elevationally identifies the domain of each villa. 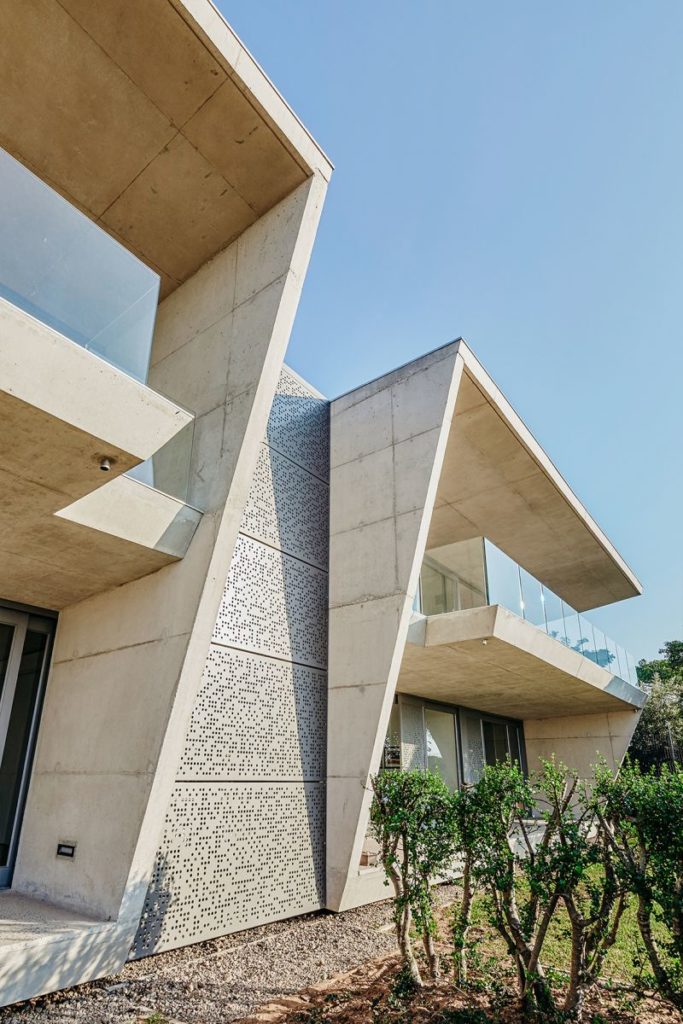 With a gently roof incline from an offset spine to the sea and another to the courtyards, engagement with the landscape is subtly promoted.

Designing and engineering the concrete roof
Despite appearing somewhat straightforward to engineer, the structure of the buildings is beguiling in its complexity. The section once again has driven the solution, particularly in respect of the roof. In order to facilitate long, clear spans of nearly 10m to allow the western enclosure to dematerialise, a deep and broad spine beam was developed. This occurs at the lowest point in the section and the inclined roof planes spring form here in two directions, forming a subtle “butterfly” roof.

On the ocean interface, slender tubular steel posts support the roof. These deal with the immense load of 3,5m projecting cantilevers by generating the required compressive strength with 80Mpa concrete caulking.

Verandas are the universal vernacular tradition in sub-tropical climates. This is for a good reason, namely to deal with deluges of summer rainfall, to provide refuge and shade to fenestration. This project is premised on a contextual and climatic response and thus defaults to the vernacular response in the creation of extensive verandas. 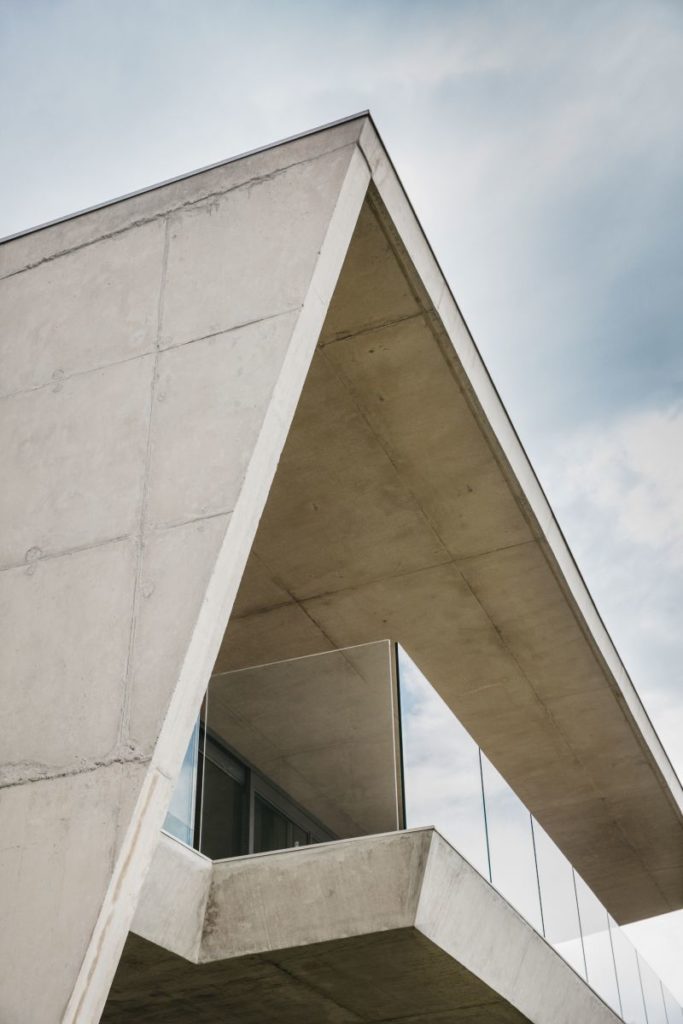 This project is premised on a contextual and climatic response and thus defaults to the vernacular response in the creation of extensive verandas.

In order to deliver this solution with elegance, extremely thin cantilevers were created to make the upper verandas. This has been done to reduce the load and to provide a visually light and dramatic edge condition on the ocean interfaces. With edge shows of 120mm, careful treatment of the reinforcement cover was imperative.

Contrasting these slender roofs reaching well beyond the line of enclosure and upper verandas, are deep veranda slabs to the courtyards, owing the idea to green edges with indigenous dune plants. The lower verandas are narrower than those above and these also cantilever from the envelope to promote the quality of floating above the landscaped gardens. This frees the elevation to complete the trace foil and imbue the composition with a unique identity.

Elphick Proome Architecture was founded in 1989 and houses a staff of 70 people. Be sure to check out our profile on the firm in the next issue.

A cultural marriage of Italian and Sino style...