Apart from cracking plaster, several other plastering defects can occur. John Roxburgh, lecturer at The Concrete Institute’s School of Concrete Technology, explains why.
1.    Debonding
Plaster, especially excessively thick layers, is inclined to debond from the wall when the outside skin shrinks at a different rate than the plaster in contact with the wall. This is generally the result of inadequate substrate preparation. 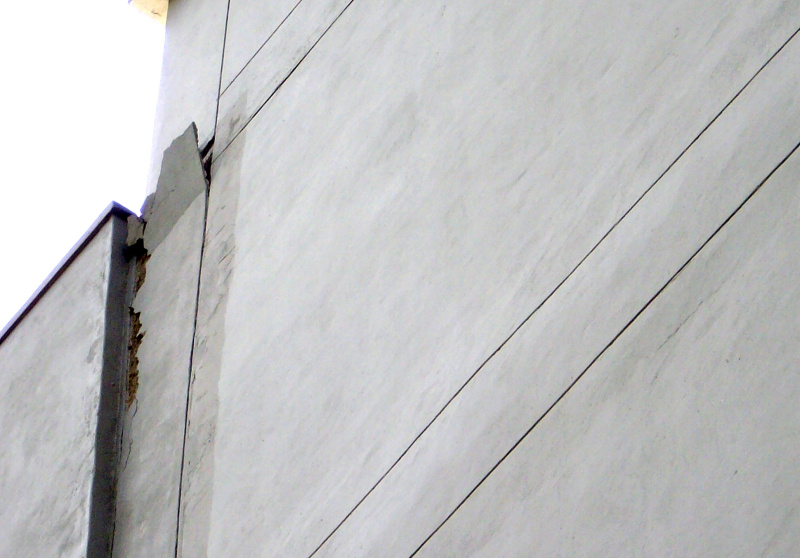 Debonding of plaster is often noticed as a hollow sound when the surface is tapped. Pictured here, an off-shutter concrete surface is debonding.

Areas larger than about the size of a plate should be removed and replaced by:
•    Cleaning dusty or oily wall surfaces thoroughly.
•    Allowing the walls to reach the correct moisture content.
•    Using a cement slurry or spatterdash coat before plastering.
•    Using bonding liquids and following the procedure recommended by the manufacturer.

2.    Lack of hardness
There are no specifications for the hardness or strength of plaster, but the four common causes of soft plaster are:
•    Insufficient cement.
•    The use of sand with excessive quantities of dust (more than 15% by mass passing the 0,075mm sieve).
•    The use of a mix with poor water-retention properties.
•    The addition of extra water too long after first mixing (a practice known as re-tempering).

It is often better to have a slightly weaker plaster that is less likely to show significant cracking or debonding, than one which is too strong.

3.    Rapid drying
Generally, causes of excessive early moisture loss are:
•    Evaporation, when plastering in sun and wind.
•    Suction into the walls, if the masonry units have not been dampened.
•    Use of bad grade sand that lacks fine material (less than 5% by mass passing the 0,075mm sieve).
•    Not using building lime or a masonry cement when the sand lacks fine material.

4.    Grinning
Grinning is when the mortar joints are clearly visible through the plaster. It is caused by the difference in suction between the masonry units and the mortar, as well as by taking out mortar joints.

Application of an undercoat or a spatterdash coat before plastering will help to avoid grinning.

5.    Expansion
This includes swelling, softening, layer cracking and spalling of the plaster. It is usually caused by proprietary gypsum-based products in the mix. Under moist conditions, the sulphate from the gypsum reacts with the Portland cement paste and forms compounds of increased volume which disrupt the plaster.

The only remedy for expansion-induced disruption due to gypsum in the mix is to remove and replace the plaster.

6.    Popping
Pop-outs are conical fragments that break out of the plaster surface. These are caused by contaminant particles in the mix, which, when reacting with the moisture in the mix, expand and cause cavities in the plaster.

Once the cause of the pop-out has been removed, the hole can be filled with a proprietary filler and painted over.

Captions Main Image:
Plaster popping as a result of the expansion of ash bricks.

Patterned public square based on an Albanian carpet