As part of the Million Cool Roofs Challenge*, the South African National Energy Development Institute (SANEDI) is one of ten global finalists to be awarded a $100 000 grant to deploy solar reflective coatings and/or materials until December 2020. The materials must meet minimum performance standards and should be applied to roofs of buildings that are regularly occupied by people.

From these ten global finalists, the team that subsequently demonstrates the best sustainable and transferable model for the rapid deployment of cool roofs during this time will be awarded a further $1 million in 2021.

“Despite their proven potential, cool roofs remain under-recognised and under-financed by both the private and public sectors. This needs to change, and the Million Cool Roofs Challenge can be a springboard towards scaling up this pivotal cooling solution,” commented Glenn Pearce-Oroz, director of policy and programmes at Sustainable Energy for All (SEforALL), in the lead-up to the competition.

“The $2 million incentive that is offered aims to spark creative ideas for addressing current barriers to adopting cool roofs at scale.” 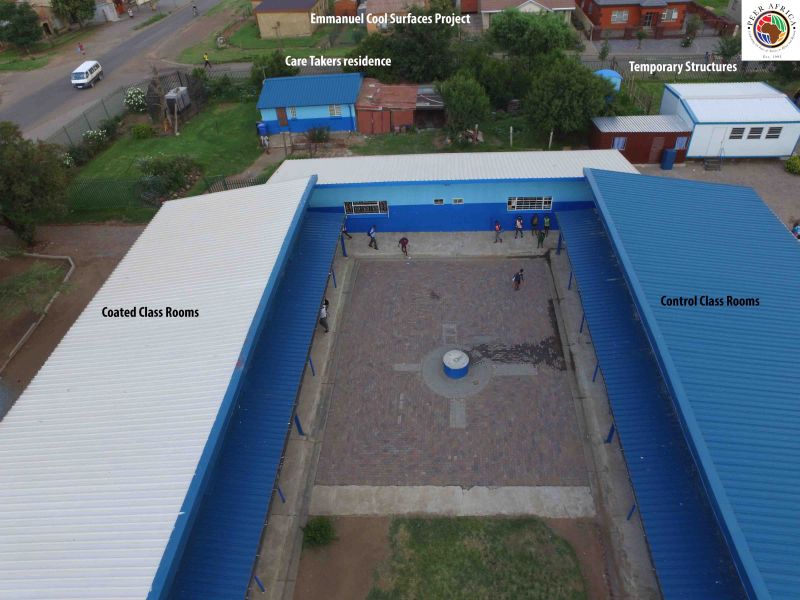 Some of the classrooms at the Emmanuel Primary School in Gauteng were coated while the others were not, so as to monitor the difference in temperatures during one of SANEDI’s pilot projects. Courtesy of SANEDI

What’s the big deal?
As temperatures continue to rise globally and populations continue to grow, the health and economic risks associated with a lack of access to sustainable cooling are higher than ever before.

• People die
According to the “Chilling Prospects: Providing Sustainable Cooling for All” report published by SEforALL in partnership with the Kigali Cooling Efficiency Programme, every year, millions of people die due to a lack of access to cooling.

One example is the more than 60 people who died in Karachi, Pakistan, during a heat wave in May 2018, when temperatures exceeded 40°C. And a 2017 study predicts that by the end of this century, if carbon emissions continue on their current trajectory, three-quarters of humanity will face deadly heat.

• Efficiency is skewed
Based on an analysis of the 52 most vulnerable countries, the Chilling Prospects report also shows that approximately 1,1 billion people face significant risks due to cooling access risks – this while in many developed countries, buildings are often over air-conditioned beyond the need for thermal comfort.

Although the efficiency of cooling equipment has improved over time, the demand and resulting energy consumption have been growing at alarming rates. For example, the report highlights that 328 million Americans consume approximately the same amount of electricity for air-conditioning alone as the total electricity used for all needs by 1,1 billion people in Africa.

• The economic impact
The economic impact of heat stress is another factor that cannot be ignored. It is expected that by 2050, work-hour losses by country will exceed 2% in ten world regions and will climb as high as 12% in the worst affected regions of South Asia and West Africa.

Cooling is not only a luxury in our warming word, but it is a necessity in helping to address hunger and malnutrition, preserve the efficacy of vaccines, alleviate the effect of deadly heat waves and ultimately achieving many of the Sustainable Development Goals.

Did you know?
• In 2018, more than 60 people died in Pakistan during a heat wave that saw temperatures rise above 40°C.
• By the end of this century, if carbon emissions continue on their current trajectory, three-quarters of humanity will face deadly heat.
• A total of 328 million Americans consume approximately the same amount of electricity for air-conditioning alone as the total electricity used for all needs by 1,1 billion people in Africa. 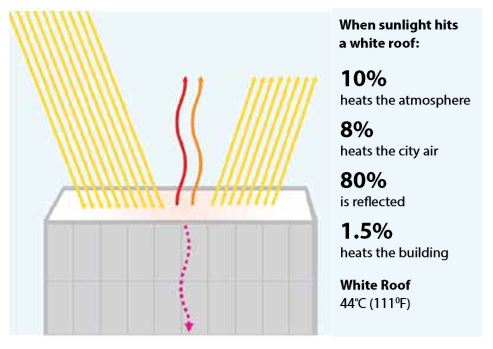 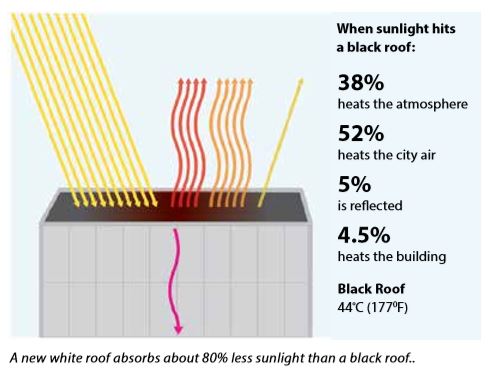 The cool roof solution
By minimising the heat gain from solar energy absorbed by buildings, reflective building surfaces reduce the demand for cooling energy for those that can afford it, while also providing a sustainable passive cooling solution for the billions of people who do not have the economic means to access mechanical cooling options.

After all, passive architectural solutions typically are the most cost-effective and sustainable, and should be the first choice for any building project in a country such as South Africa, with an unstable electricity grid.

“Reflective roof surfaces not only have an impact on individual buildings, but positioning them across a whole community can have a net effect on reducing the overall local temperature,” says Denise Lundall, project officer for energy efficiency, cool surfaces at SANEDI.

“The uptake and promotion of cool surfaces have been much more enthusiastic in developed countries than in developing ones. The extraordinarily large cash prizes for the challenge is a strong indication of the conviction the organisers have in cool surfaces to address environmental concerns. The South African government’s championing of cool surfaces technology is competing with other national concerns, limiting the budget investment. This cash prize will allow for substantial progress,” she adds.

According to Pearce-Oroz, cool roofs are paramount to bringing sustainable cooling to all. “Data shows that the simple act of replacing a dark roof with a white one can reduce indoor temperatures by 2 to 3°C. This may not seem like much, but it can make all the difference in a heatwave.” Also, studies have shown that in buildings without air-conditioning, this simple tweak can reduce the net annual energy usage by up to 20%.

So what is the plan for SA?
According to Lundall, the Cool Roofs project will work with local municipalities to scale cool roof solutions in government-subsidised homes throughout South Africa, effectively coating a minimum 25 000m² of roof area in each of the municipalities selected.

“The minimum number of buildings to be coated is calculated on the average RDP standard building plans, which is usually 40 to 50m² per roof. Based on the past project’s numbers, each completed project should benefit an estimated 500 dwellings and 385 extensions and backyard additions. Each dwelling has approximately six occupants per two-bedroomed structure,” she explains.

Building on previous successes
Leading up to the Million Cool Roofs Challenge, SANEDI has rolled out a low-cost housing project in Groblershoop in the Northern Cape, which has seen a total of 27 500m² residential homes being coated, benefitting an estimated 2 310 people, as well as two schools, a day-care centre and two municipal offices.

Empowering locals
Over the next year, SANEDI will provide energy efficiency awareness training to the communities for their buy-in. A group of unemployed local residents will be selected to be professionally trained and certified. Upon completion of this training, these interns will be employed to apply the specialised coating technology under supervision.

Quality control
“A professional labour management company will oversee the application and include a ten-year warranty against labour and product failures through annual inspections. A post-implementation measurement and verification to assess beneficiary satisfaction, technology efficacy and longevity will be conducted,” Lundall assures.

In addition, the analysed data will be made available to the public.

Thanks and acknowledgement are given to SANEDI, Sustainable Energy for All, the Million Cool Roofs Challenge and the Global Cool Cities Alliance for the information contained in this article. 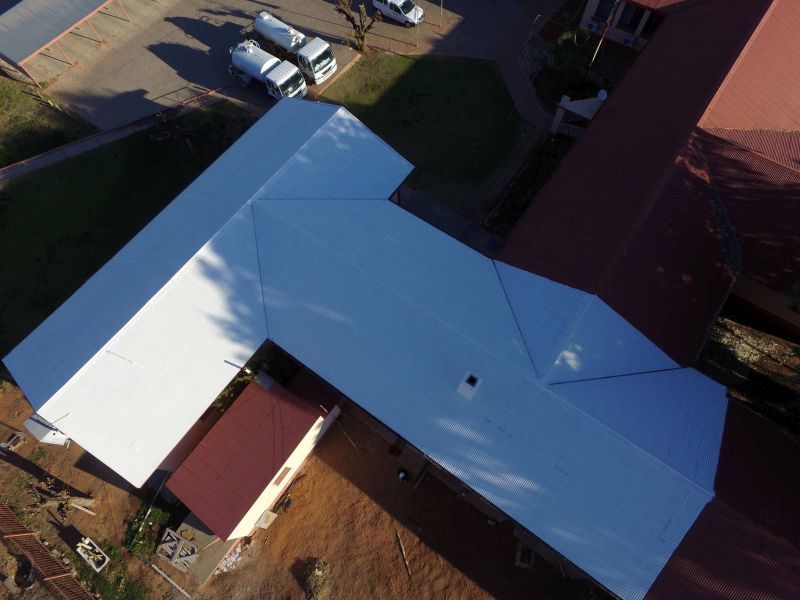 A Cool Roofs coating is an inexpensive, effective, passive energy, low-tech cooling intervention, which allows less heat into the building, making non-air conditioned homes, warehouses and other buildings much cooler. Courtesy of SANEDI

Key cooling facts
• Permanently replacing the world’s roofs and pavements with highly reflective materials will have a cooling effect that is equal to removing 44 billion tons of CO₂ from the atmosphere (roughly one year’s worth of global man-made emissions).
• About 9m² of white roofs will offset the climate warming effect of one ton of CO₂.

Dark vs reflective
• Most roofs are dark and reflect less than 20% of the incoming sunlight. A new white roof reflects about 70 to 80% of the sunlight.
• Dark roofs can reach temperatures over 66°C, while a white or cool roof under the same conditions would stay more than 28°C cooler.
• Over time, white roofs will weather and soil, and the amount of sunlight reflected decreases to between 55 to 65%. Replacing a dark roof with an aged white roof still reduces the amount of sunlight absorbed by about 45 to 65%.
• Highly reflective roofs do not need to be white, but are available in popular colours such as red and grey.
• Cool coloured materials are available for all types of pitched or low-sloped roofs, and include metal, clay tile and concrete tiles.

Urban heat island effect
• The difference between ambient air temperatures in a city and the surrounding rural areas can be 3 to 4°C in summer months.
• Cool roofs can help reduce such heat island effects. Simulations run for several United States (US) cities have shown that the urban summertime air temperature can be reduced by 2 to 4°C by installing highly reflective roofs and pavements and planting shade trees citywide.

Air-quality benefits
• Reduced urban temperatures also improve the air quality NOx and volatile organics cook more quickly into smog on hot days. According to a study of the Los Angeles basin, a combination of lighter surfaces and shade trees could reduce exposure to unhealthy air by 10%.

FOOTNOTE:
*A project of the Kigali Cooling Efficiency Programme (K-CEP) in collaboration with the Global Cool Cities Alliance, Sustainable Energy for All (SEforALL) and Nesta’s Challenge Prize Centre.