Designing African cities for the humans who live there has become a critical endeavour. According to population growth statistics, by 2030 a total of 50% of Africa’s inhabitants will live in cities, especially marginalised cities and towns.

A conventional approach to urban growth remains dominant in Africa, but New Urbanism is a philosophy, a practice and a reformation movement that is becoming increasingly influential as an alternative solution. New urbanist design allows for a more inclusive, liveable and viable city, as well as for placemaking for diverse communities.

One of the biggest challenges on our continent is the renewal of marginalised areas in cities and towns, which could benefit from the New Urban ideas around “tactical urbanism” and “increment urbanism”. Success stories for the New Urbanism approach already exist in African cities, although not clustered in one location but scattered within multiple cities and towns.

The urbanist Maboneng Precinct in inner city Johannesburg is just one example of how new urbanist ideas can be successfully implemented. Maboneng underwent an incremental urbanism renewal, by approaching each redevelopment project block by block, allowing daily urban African life to coincide with and continue without disruption.

Our book, Africa Drawn (2018), examined historical patterns in 100 of the most connected and important cities of the continent to examine contemporary and historical placemaking actions in Africa. The result is an artistic and visually fascinating documentation of African urban space and a convincing analysis of its structure and morphology.

New Urbanism ideas can be seen in this historical context, relating to inclusive planning and designing for the climate. Understanding these patterns could possibly provide a framework for development and redevelopment for cities and towns in the future.

New Urbanism should not be an ideology among urban planners or designers, neither as social engineering, but as a movement relevant for Africa.

How we approach the future design of our towns and cities to promote a more comprehensive, diverse and people-focused living environment starts with understanding our challenges, and how we can invoke the New Urban principles to solve these issues. 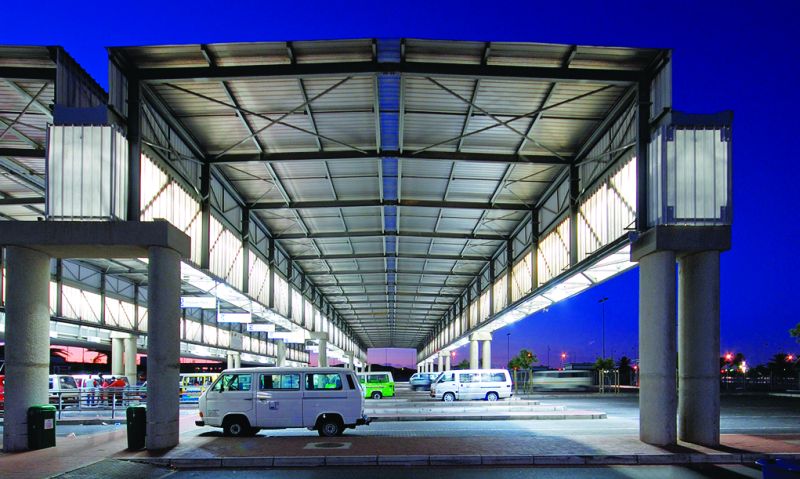 This project in Mitchell’s Plein, done for the City of Cape Town, provides a practical example of New Urbanist tool 3 – “Reconfigure the urban sprawl” – with the reconfiguration of our sprawling suburbs and marginalised areas, we can create communities of real neighbourhoods, including diverse districts. 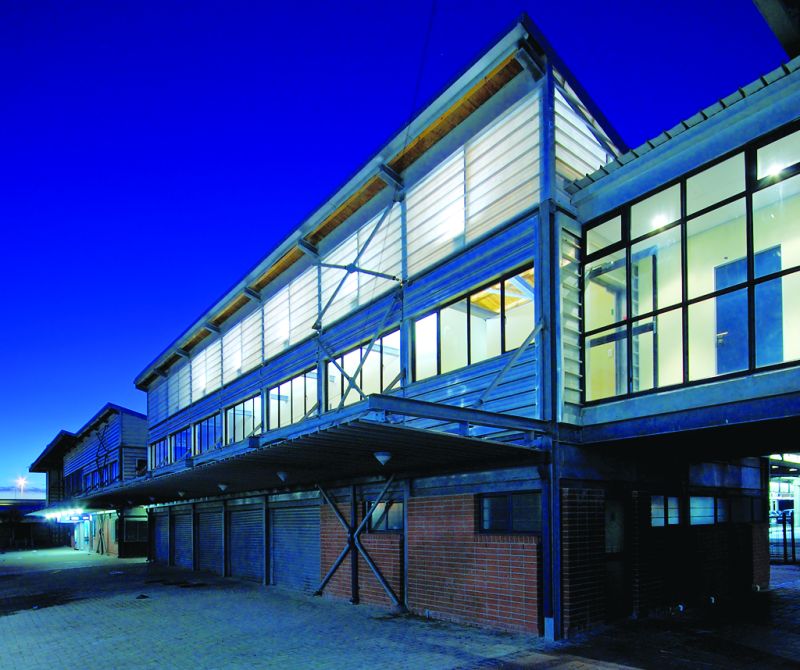 Urban reality: Urban spaces are designed more for cars and less for people
New Urbanist Idea 1: Design for the community
Africa needs the design and management of public spaces to provide a focus for community activity, identity and well-being. Our cities are clearly designed with consideration to motor transportation, which impacts on the health and community of those in the lower economic class. All citizens need public spaces, for community events and gatherings. These spaces nurture our democracy and promote integration. 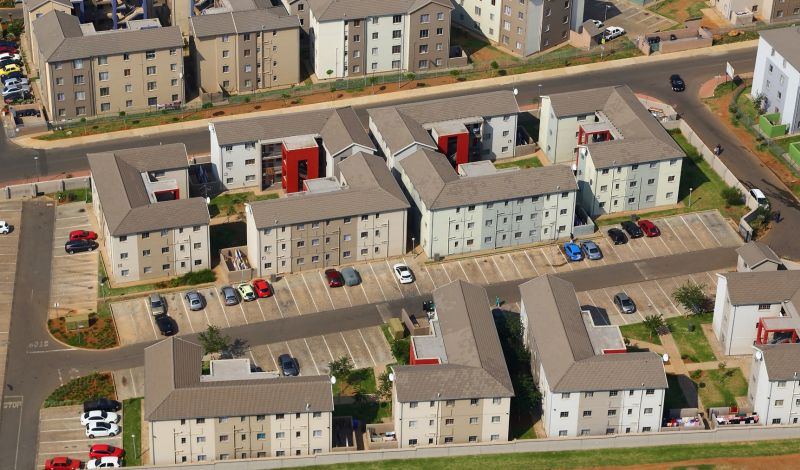 With the project Calgro M3 in Fleurhof for the City of Johannesburg, New Urbanist tool 6 is demonstrated – “Inclusive policy”, which dictates that communities should be designed for pedestrians and public transit, as well as the car.

Urban reality: Decay of inner cities and towns
New Urbanist Idea 2: Restoration
Working towards the restoration of existing urban centres and towns (both pre- and post-colonial) within coherent metropolitan regions, ensures sustainably urban development. By moving thinking from the vehicle to the human, urban city regeneration can improve walking routes and the quality of life within towns and cities for all classes. Regeneration, rather than development, limits the use of environmental resources and promotes the green city lifestyle.

Urban reality: Suburbia’s high mass, car based
New Urbanist Idea 3: Reconfigure the urban sprawl
Our suburban areas are vast in size and desirable, yet are designed to require personal transportation, and have divided areas into economic pockets. With the reconfiguration of our sprawling suburbs and marginalised areas, we can create communities of real neighbourhoods, including diverse districts.

MIT’s Alan Berger puts the vision for the future of the urban sprawl forward. “In sustainable new suburbs, house and lot sizes are smaller, in part because driveways and garages are eliminated. Paving is reduced up to 50% and landscapes are more flexible. The plant-to-pavement ratio of the contemporary suburb is much higher than that of cities, but the next generation of suburbs can be even better at absorbing water.”

Urban reality: Depletion of natural resources as cities and towns are built
New Urbanist Idea 4: Conservation
Through transformation and efficient urban planning, the conservation of natural environments and depletion of our natural resources can be avoided. This is known as sustainable urbanism. With limited land, water and our worldwide concern for air quality, we must consider the environmental impact as well as the human one.

By designing cities that are more compact in urban form, making use of public transportation systems and preserving our natural resources, we will build a better quality of life for future generations and leave an enduring positive impact on the environment.

Urban reality: Imported built technology and skills
New Urbanist Idea 5: Preservation
We need to preserve our local built legacy, skills and placemaking. In Africa, this means we should be building with nature and for our climate, for example using passive cooling in buildings, and making use of local building materials, labour and knowledge.

A good example is the work of Francis Kéré’s Gando Primary School in Gando, Burkina Faso. Kéré’s design is based around the climate and local resources. The building is constructed from a clay/mud hybrid construction, used to maximise results with the limited resources available in the area.

The clay bricks have the added advantage of being cheap, easy to produce and providing thermal protection against the hot climate. Instead of a ceiling, which traps in heat, there is a vault roof made from BTC bricks, allowing for ventilation and natural light.

Urban reality: Policy of urban vulnerable displacement and social economic segregation
New Urbanist Idea 6: Inclusive policy
Urban policy is still shaped around the benefits of the car, not the people. Policy and developmental practice should support the following principles:

Urban reality: In 2010, in sub-Saharan Africa, 200m people lived in marginalised areas
New Urbanist Idea 7: Liveability and viability
We recognise that physical solutions by themselves will not solve social and economic problems, but neither can economic vitality, community stability and environmental health be sustained without a coherent and supportive physical framework.

Such a framework would come from a multidisciplinary team, compromising of urban designers, architects, the community, government, engineers and developers, who could each contribute their unique perspectives and innovative ideas. The framework would then be implemented by both the private and public sector together.

This framework should be adaptable, with guidelines and controls to implement a change to our urban development over time, to prevent more marginalised areas. 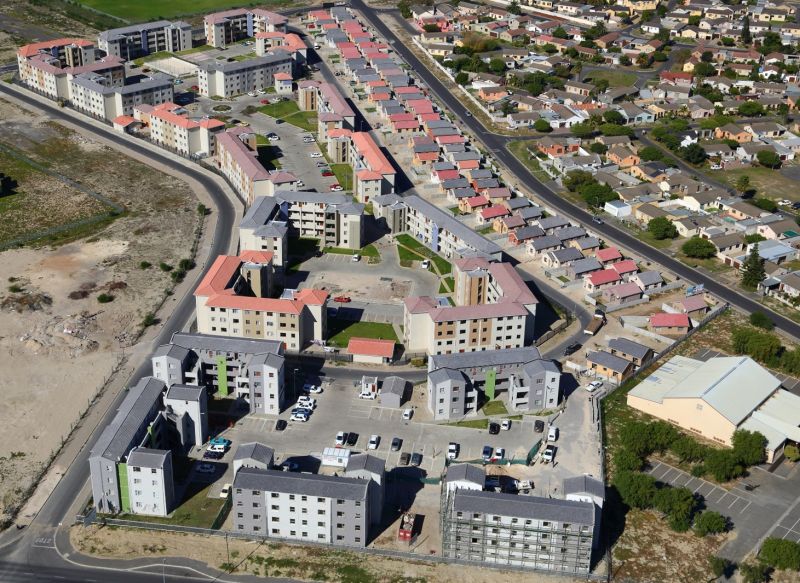 The Scottsdene development (Also Calgro M3), City of Cape Town, was done with New Urbanist tool 1 in mind – Design for the community. “Africa needs the design and management of public spaces to provide a focus for community activity, identity and well-being”.

Urban reality: Limited citizen-based participation projects
New Urbanist Idea 8: Community involvement
Designing for the people should involve the people. By promoting a broad-based citizenry, composed of public and private sector leaders, community activists and multidisciplinary professionals, the planning of a human environment is enacted by those who will use it. This proves leads to re-establishing the relationship between the art of building and the making of community, through citizen-based participatory planning and design.

Congress for New Urbanism calls this movement Lean Urbanism, a multidisciplinary movement to lower the barriers to community building. Lean Urbanism shares the principles of New Urbanism in creating holistic communities, but it seeks more efficient ways to achieve that end to allow small operators to take part, including those with limited capital, such as individuals and small businesses.

Urban reality: Automobile-dominant cities and towns
New Urbanist Idea 9: Reclaim the streets
By designing our cities for pedestrians, we work to reclaim our homes, blocks, streets, parks, neighbourhoods and environment. Moving from a car-dominated design to a pedestrian-friendly environment makes for a healthier community and living.

Urban reality: Lack of understanding of historic patterns/urban form and their origin
New Urbanist Idea 10: Respect the precedents set by history
The development and redevelopment of towns and cities should respect historical patterns, precedents and boundaries. In the book Africa Drawn (2018), we explored the patterns of African towns and cities, with the aim of comparing urban form, spatial structure and quality of public space to find out what makes cities resilient. The drawings examined connectivity in terms of air, rail and thoroughfares. Historical urban patterns can give us clues to climate-responsive design, working with topography and compact urban space. Understanding their resilience can inform future planning, specific to our country.

LVT trends in the hospitality, medical and education markets in Africa

How quantity surveyors can root out misspending

The future of the flooring industry by Oscar...

A duo to watch!

Advice for women who want a career in...

How to prevent cyber attacks