Situated within the Pretoria CBD, the 01 on Mutual rental apartment block, designed by GASS Architecture Studios and developed by City Property Administration, is an upmarket, customer-centric property designed to boost social cohesion and facilitate people to share a living and working space.
The R161 million development comprises 142 studio, one-bedroom and two-bedroom residential units, designed around a landscaped courtyard on the fourth floor which provides recreational facilities for residents. The building also offers 400m² of office and 1 550m² of retail space with safe parking for 210 vehicles.

The brick facade
The building facade was constructed using the 310 Silvergrey Satin and 180 000 Silvergrey Travertine face bricks in a mixture of stack and Flemish bonds in a random 50-50 pattern.

“The Flemish bond with voids was used in the parking levels to allow for ventilation of the area,” explained Renato Lopes of GASS Architecture Studios. “This missing brick was both a functional and aesthetic decision as the pattern creates an eye-catching design and, to make the construction somewhat more complex, the patterned wall also had a combination of 82 000 Silvergrey Satin Solids combined with the face bricks.” 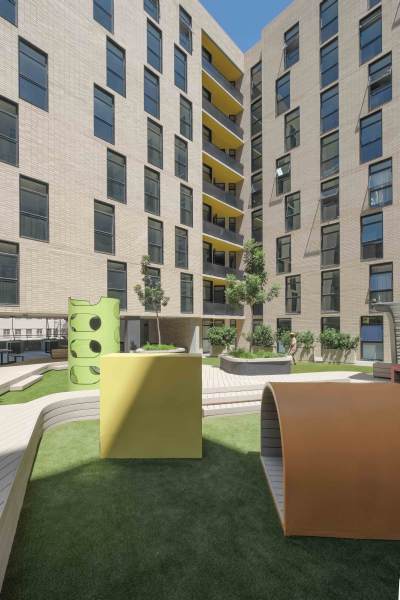 The building was designed around a landscaped courtyard on the fourth floor which provides recreational facilities for residents Courtesy of GASS Architects, Stephen O’Raw

Urban renewal
According to Musa Shangase, Corobrik’s commercial director, brick is a popular choice for urban renewal projects since it is not only durable and practical, but also attractive.

“Developers involved in these inner-city projects are looking to establish buildings, used for living, working and shopping, that will remain intact for decades to come,” he explains. “These are long-term projects as we don’t want to begin another urban renewal a few years down the line. This is one of the primary reasons why face brick is being selected.”

Shangase points out that the face brick exterior of 01 on Mutual requires no maintenance. In addition, the durability and resilience of the bricks allows them to withstand even the harshest elements and their natural propensity for absorbing and releasing moisture protects the building against mould growth which contributes towards “sick building syndrome”. The brick also minimises heat retention in hot months while keeping the building warm in cooler months.

“There is no plastering and painting later on making this an extremely cost-effective option,” continued Shangase. “And, on top of this, the completed structure is somewhere people want to reside or work because of its overall aesthetic appeal.”

A new line of wallcoverings to enter the...