Colgate’s premises in Boksburg, Gauteng, recently underwent a major revamp. The facility, which is a conglomerate of factory, warehouse, conference, services, canteen and office spaces, has been in operation for over 60 years and the company hired Roger Davies Architects to help them consolidate their site operations including the integration of the office component into the main factory building.

The property is located in a medium use industrial area and the nature of the building is unique with barrel vaulted concrete roof structures spanning between large columns.

Colgate initially wanted pragmatic insulated walling solutions, but Roger Davies and his team took the view to incorporate the vaults and clerestory windows enabling the historic character to integrate offices into the existing spaces. The result is a pleasant environment that maximises the use of natural lighting but also includes contemporary ceilings, dry walling and floor finishing.

The office component of the operation consists of general, open plan, boardroom training and meeting spaces, a server room, a kitchen, laboratories and document archiving. There is also a separate building that houses a small boardroom and meeting rooms that has a visual connection to the factory and offices. Belgotex’s flooring products were specified for all the office-related flooring on the project. 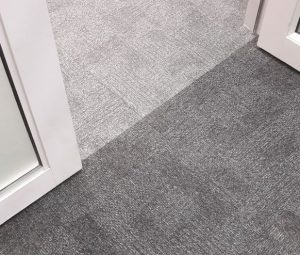 “The factory offices needed a durable product with a good appearance, which is why we chose the Aviator carpet in Belgotex’s Mod Design range,” says Roger.

Over 1 400 square metres of the Aviator carpet were specified in Cyclone Mist and Black Cloud which realised the intention of the required mono chromatic theme.

“We needed a visually comfortable, but hard wearing solution for the office areas as they are high traffic zones with continued movement of management, sales reps and factory staff. Belgotex’s Mod Design range is attractive, affordable and it has a certain trendiness and textured body that is a great match for corporate spaces. In Colgate’s case, the right tonal combinations made it appropriate for their industrial setting. We have used this carpet extensively in other projects, most notably at Aveng’s Conference Centre in Jet Park where tonal patterns added to the dynamic of the space,” says Roger.

Approximately 50 square metres of Belgotex’s Davenport vinyl plank system was also installed in the new entrance area of the building. It is a crisp and modern glass framed element complemented by the vinyl flooring. This flooring was also used at St Peter’s College in Sunninghill Art and Music Studios very successfully where its durability has proved to be superior.

Roger Davies Architects places continued emphasis on an individualised approach to each of their projects where unique character of place is enhanced. Roger says that they continue to use Belgotex’s products in a number of their buildings and for good reason.

“Whether we’re looking for something practical and durable or a flooring product that is upmarket and brings other design features to life, we’re always able to find the right solution at Belgotex. Their products have proven to be enduring and the company’s service has been consistently good. I’ve also found that architects and designers are familiar with Belgotex’s products and new ranges as they are consistently well catalogued and up to date, which is why we will continue to seek them out and use them,” concludes Roger.

Selecting the ideal walk off and doormat

Helping you determine sustainability in flooring