Although best known for its flame-grilled chicken and tongue-in-the-cheek advertising, Nando’s is also making a name for itself in the world of design. In fact, it has recently launched its very own progressive design programme, called “Clout”. Clout is focused on showcasing young local South African designer talent on the walls of Nando’s restaurants in over 35 different countries around the globe.

Since 2015, Nando’s has been actively seeking out talented young designers – not only to proudly display their artwork at any given opportunity, but also to help them hone their skills and reach their full potential.

The year 2015 saw the official Nando’s Hot Young Designer competition take place. The competition encouraged creatives under the age of 35 to conceptualise a beautiful yet functional pendant light fitting that could be hung seamlessly from the roof of any Nando’s restaurant.

The design was to be inspired by both an African narrative and the Nando’s brand itself. The winner of the competition was Thabisa Mjo of Mash T Design Studio, who has recently been voted SA Designer of the Year at the 100% Design South Africa Awards 2019.

The Nando’s Hot Young Designer competition was followed by the launch of Clout itself, the Clout Designers’ Industry Days fired up by Nando’s and the Nando’s Portal to Africa. 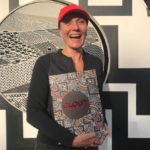 “This started with the interior design and curation of Central Kitchen, the Nando’s head office in Johannesburg. Together with Michael Spinks and the greater Nando’s design team, we have nurtured a focus on creative strategies to develop young talent. We have built a rich story of collaboration and creative potential which continues to drive the work we do,” she adds.